Hi friends. I’m feeling exceptionally happy today, and not just because it is Friday. Also, not just because I’m drinking a huge mug of delicious coffee. The real reason is that I have something exciting to write about today, and this could quite possibly be my favorite “Friday Fave” to date. I hope you’ll read on.

I discovered Kickstarter while reading one of my favorite blogs. The girl who writes the blog (her name is Lindsey Markel) also wrote a publication for girls with the goal of “empowerment through advice, education and encouragement regarding everything from school to credit cards, and heartbreak to living a life of wonder”. Lindsey was seeking to self-publish her work in book format and distribute it to women’s shelters, Planned Parenthoods, and after-school programs nationwide, which is why she turned to Kickstarter.

Curious, I clicked the link from her blog and was led to a site which calls itself a “a funding platform for artists, designers, filmmakers, musicians, journalists, inventors, explorers…”. I could become a backer of Lindsey’s project by pledging any amount of money (from as little as $1) and if her goal amount was reached (which it was – twice over, actually), my pledge would be collected via an Amazon payment.

After I made my pledge, I began exploring some of the other projects on Kickstarter. There were all sorts of creative types hoping to turn their projects into a reality, which got me thinking about Listen & Learn. I have lots of goals for my song collection and website, one of which is to professionally record a compilation CD which can be widely distributed to those who it could possibly benefit. My current set-up, which consists of recording and editing each song on my laptop and burning CDs one by one, is funtional but not ideal. As my horizons have expanded, I’m ready for the next level!

So today is the official launch of my very own Kickstarter project, titled “Listen & Learn: Songs for a Different Kind of Audience”. My hope is that if one of my songs or ideas has positively affected a child in someone’s life, that person will become a backer. After all, backers get cool stuff in return (did I mention that part earlier?). I could keep writing, but instead I’ll just give you the link to my project – HERE IT IS!! 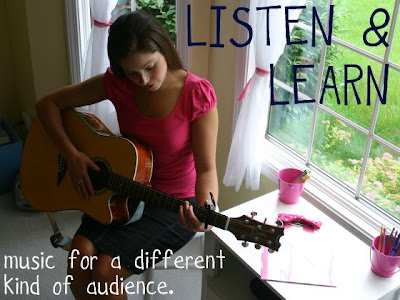 Thanks for reading this super-long post, and for being a regular visitor. Have a beautiful Friday and a wonderful weekend!

In Memory of Michael Jackson 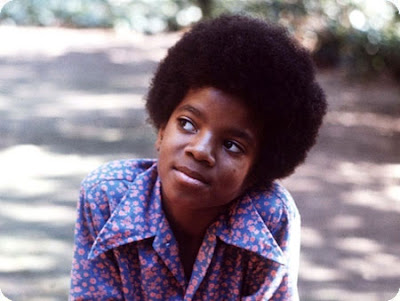 There’s not much left to be said about Michael Jackson that hasn’t been said already in the wake of his death. When I heard the news, I – like most people – found it hard to digest. MJ is an American icon, but he was human, too…something we tend to forget when it comes to ultra celebrities like him. No matter how he lived his personal life, nothing can change the fact that he was a phenomenal entertainer whose fame and influence spanned multiple generations.

I’ve been listening to a lot of Michael Jackson’s music over the past two weeks, and it’s been fun revisiting the songs that I loved so much as a child. I caught the last hour or so of his memorial service today, and I just have to share with you what I thought was the most emotionally moving musical performance of all:

I’ll never forget performing “Heal the World” as a third grader in my elementary school musical, We’re Gonna Have an Earth Day. The show itself was cheesy, but the feeling that I had when we sang that as a choir came rushing back as I watched today’s rendition during the memorial. There’s no questioning Michael Jackson’s profound effect on the world, and the fact that he will be missed. 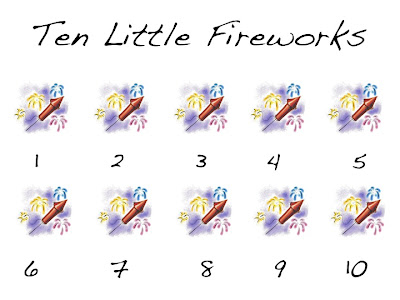 I know the Fourth of July has passed, but I decided to write this post anyway. After all, the holiday weekend isn’t over yet and next to celebrating our country’s independence and those who protect it, fireworks are a central feature of the Fourth. In fact, I can’t recall a single Independence Day when I didn’t attend at least one patriotic display. You can find them all over our city, from the park to downtown to neighbor’s front yards, and despite the inclement weather, this year was no exception.

I think fireworks deserve their own place in the “Counting Time” collection, and my students agree. We have been counting them for the last week or so, along with flags, suns and ice cream comes. You know the tune by now, so go ahead and sing along:

How many fireworks?
Ten little fireworks.
All lined up in a row!

Hope you had the chance to enjoy some fireworks in your neck of the woods, and that you have the opportunity to relax on this lazy Sunday (which is exactly what I’m doing). Bye for now!

Today’s Friday Fave is a little different from those I’ve posted in the past. Before I get to the “fave” part, there are some not-so-pleasant facts I need to share…here goes.

The state of Illinois is facing some pretty devastating budget cuts that would drastically reduce or eliminate many statewide social services. The long list of agencies and organizations that would be affected provide services for millions of people, many of whom are children with disabilities.

The Hope Institute for Children and Families provides residential and educational services to children with multiple disabilities, and it is on that list. I have been ensured that my job as music therapist is not in danger, but some of the children at our school might not be so lucky. It these cuts are not restored, services for many of our students may not be funded and they might be sent home. An incredibly alarming scenario, not just for Hope but for the parents and students who depend on the care that Hope provides.

But everyone at Hope, and those involved with the other social service agencies in Illinois, has faith that doors will not be shut and children will not be denied the support upon which they depend. And that brings me to the “fave” part of this otherwise somber post, which is community support.

I have been amazed at the efforts of our community here in Springfield and across the state to stop these devastating cuts from ocurring. Two weeks ago a huge rally at the capitol building was organized, and many social service organizations united to show our legislators just how dedicated they are to what they do, and how far they are willing to go to keep doing it.

Letter-writing and telephone campaigns have been in effect since the budget cuts were announced, and through the beauty of email, Facebook, and Twitter, I’ve watched as people have responded and participated in such campaigns, whether or not they are affiliated with an affected social service agency. What a beautiful thing.

The legislators won’t be in session again for another two weeks, so it could be a while before we have any definite answers about the future of Illinois. But I am sure that in the meantime, the community will continue to write letters to the editor, email and call their representatives and senators, and so on. And that makes me proud to be a part of it, despite our sad political state.

For more information about the Hope Institute and how it could be affected by the budget crisis, visit their Facebook page.

Clap Your Hands ‘Cause it’s July!

Holy cow, already? It still feels as though summer is just getting started. Regardless, the beginning of July is one of the highlights of the summer, and the fun begins today with a brand-new song of the month. (Actually, I wrote it last July…but it’s new to you!)

Picnics, ice cream, apple pie,
Clap your hands ‘cause it’s July!
The seventh month of the year,
For thirty one days July is here.

Wave your flag, way up high,
Celebrate the fourth of July.
Let’s all wear red, white, and blue,
Fireworks for me and you!

Independence is the word,
Patriotic songs are heard.
Let’s join in and sing out loud,
For our country we are proud.

Summer’s coming to a peak,
It gets hotter every week.
Hear the crickets chirp at night,
Until the morning sun shines bright.

What are your plans for the 4th of July? And do you have any festive songs to go along with this patriotic holiday? If so, please share :) July is already off to a busy start for me – my best friend is coming to town today, I’m playing at a new venue on Friday, and of course, Saturday will be filled with food, fun, and fireworks. The perfect trifecta, if you ask me.