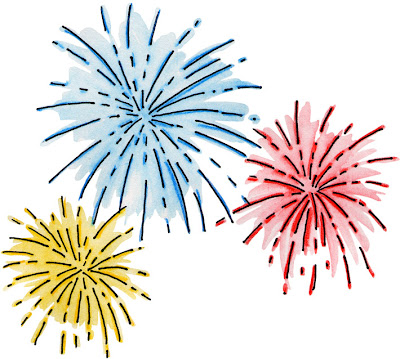 I can’t believe that I am writing my last blog post of 2009. Where did the last twelve months go? This year seems to have flown by faster than any previous year, which I’m told happens as you get older. But as quickly as it went, 2009 was a fabulous year, in terms of both my career and personal life. Follow the links to read more about each month’s highlight:

January: One of my students had a breakthrough during music therapy.
February: I passed the joy of the Snowball Microphone on to my readers.
March: My husband and I closed on and moved into our new house.
April: We vacationed in San Diego and returned completely refreshed.
May: A new addition to the family arrived…our golden retriever, Sadie.
June: I turned 26 and got an iPhone, which did wonders for my productivity.
July: I launched my Kickstarter project, a three-month adventure.
August: My music therapy work was featured in a local news piece.
September: Listen & Learn was featured as a “Blog of Note” by Blogger.
October: The Model Me Kids DVD for which I wrote songs debuted.
November: I attended and presented at my first national conference.
December: I was featured in a radiothon for Children’s Miracle Network.

If 2010 is anywhere near as successful as 2009 was, I’m in for a great year. Thank you, everyone, for reading Listen & Learn Music, and for sending your feedback my way. I hope you’ll continue to do so in the new year. And come back tomorrow to hear a song you can sing for the next 365 days, as well as my new year’s resolutions. Cheers! 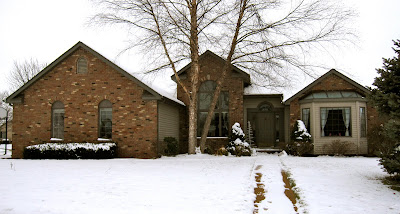 In my last post, I was anxiously awaiting snow…and it came! We got our white Christmas here in central Illinois, so I just had to share a picture of our current house covered in it. As you can see, we haven’t quite gotten around to shoveling the walkways, but what can I say – we’ve been busy! Family and friends have taken priority over all else this past week, but now that Christmas is over, I’m ready to get back to blogging. I’ll leave the shoveling to Zach :)

In all of the holiday shuffle, I think I forgot to acknowledge the fact that winter officially began last week. While that might not be a big deal to most people, it is to me. I include a song for the current season in each of my group music therapy sessions at school, and “Fall into Fall” and “All About Autumn” started to get really old after three long months. My students and the staff agreed; they were excited to sing “Winter All Around Us” for the first time last Monday!

Winter, winter, all around us
Sing a song, sing a song,
As we count the days ‘til spring’s here
Won’t be long, won’t be long.

I will indeed be counting the days until spring is here. I’m not one for enjoying the outdoors during the winter months, so if you happen to drive past my house, you will most likely see me holed up in my office, probably with a blanket wrapped around me. 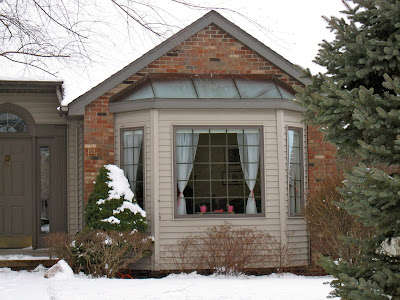 Yep, right through there! In fact, that is where I am right now, typing this blog post. After which I have songs to record and sessions to plan, so it’s time to wrap this up. I hope you are enjoying winter break (or winter working, if you are back already) and I’ll catch you later!

Merry Karaoke: Home for the Holidays 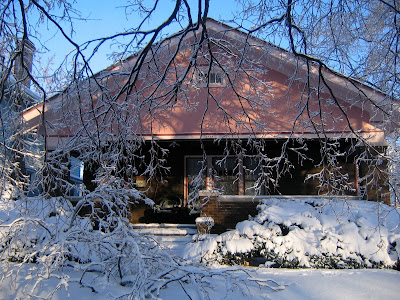 That is how our first holiday in our first home looked. It was certainly a white Christmas, and I was hoping to take a similar picture of our new home this year, as we get ready to celebrate our first Christmas in it. Unfortunately, we’ve only had a tiny bit of snow, and it is currently raining cats and dogs, so maybe I’ll get one later in the week.

No matter what the weather, I’m just glad to be staying home for the holidays! I feel very lucky that both of our families are nearby, which means we get to see everyone without having to drive long distances or get on an airplane. And that is why I decided that for today’s “Merry Karaoke” song should reflect this sentiment:

Oh, there’s no place like home for the holidays,
For no matter how far away you roam –
When you long for the sunshine of a friendly gaze,
For the holidays – you can’t beat home, sweet home!

I met a man who lives in Tennessee, and he was headin’ for
Pennsylvania and some homemade pumpkin pie;
From Pennsylvania folks are travelin’ down to Dixie’s sunny shore;
From Atlantic to Pacific –
Gee, the traffic is terrific!

I met a man who lives in Tennessee and he was headin’ for
Pennsylvania and some homemade pumpkin pie;
From Pennsylvania folks are travelin’ down to Dixie’s sunny shore;
From Atlantic to Pacific –
Gee, the traffic is terrific!

What are your plans for the holidays? Will you be staying home, or traveling to see friends and family? No matter what you’re doing, I hope your week is safe, fun, and full of cheer. Today is my first official day of vacation, and I am off to bake cookies. I’ll be back with at least one more installment of “Merry Karaoke” before the week is through…see you again soon! 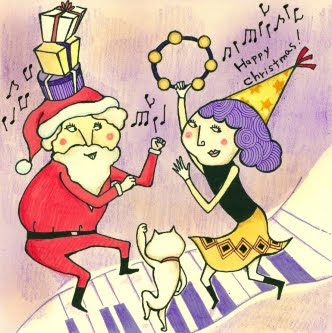 Well, maybe not quite yet…but how about in 7 hours, when school is out? Today is our last day before Christmas break officially begins, and I’m wasting no time getting the party started. Zach and I are celebrating tonight by heading down to St. Louis for dinner, and then we get to see Allison Weiss (one of my favorite singer/songwriters) in concert.

And that is just the beginning. Tomorrow, my sister-in-law and I are going to bake and decorate cookies, and then we have a fun double date planned with friends. Christmas Eve is the same every year: singing in church, party at Zach’s uncle and aunt’s house, and then on to my uncle and aunt’s for their annual party. On Christmas, we’ll open gifts with my family and eat our traditional spaghetti dinner, and then head over to my in-laws’ house to open gifts with them. We’ll end the evening with my family, opening more gifts and just hanging out. As if that wasn’t enough, Zach decided we should host a party on the 26th, so the fun will just keep on going. Or I will collapse from exhaustion…either way, a good time will be had by all :)
But back to today. Everyone is a little giddy at school today (teachers and students!) with the anticipation of Christmas break. I’m looking forward to going caroling from room to room with one of my classes later this morning and getting my last fix of the December songs before I retire them until next year. See you in 2010, Hope Institute!

There’s nothing like a little snow and an early Christmas celebration with family to put you in the holiday spirit. As we drove home from my in-laws’ house this afternoon, all I could think about was singing along to some of my favorite Christmas songs, and that is just what I did. In fact, I went one step further by recording one of them, karaoke-style. Cheesy? Yes…but tons of fun! I’ve told you before how much I love the Carpenter’s Christmas Portrait

album (remember?) so you shouldn’t be surprised that the song I chose is from that very collection.

Frosted windowpanes,
Candles gleaming inside.
Painted candy canes on the trees.
Santa’s on his way,
He’s filled his sleigh with things.
Things for me and for you.

It’s that time of year
When the world falls in love.
Every song you hear seems to say,
Merry Christmas,
May your New Year dreams come true.
And this song of mine,
In three quarter time,
Wishes you and yours
The same thing, too.

Be on the lookout for one or two more installments of “Merry Karaoke” before the big day, which is quickly approaching! I had a chance to catch up on holiday preparations this weekends – not only did I finally finish my shopping, but I also did all of my wrapping. Cookies is next on the list, but that will have to wait until tomorrow. I’m off to curl up on the couch and watch my favorite holiday movie, White Christmas. So long for now!