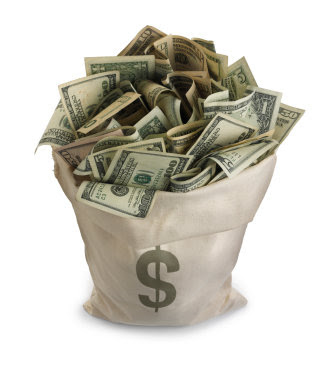 With the holidays just around the corner, buying gifts for friends and family is on just about everyone’s to-do list. Many of you probably include your children in this activity, and they may even use some of their own money to purchase presents. Although the concept of exchanging money can be foreign to little ones, there’s no harm in teaching it early.

You may remember the Four Little Coins song I shared several months back. In today’s song, we address paper bills – the green stuff. Although I’m thinking that I should probably write a new money song about plastic, since credit and debit cards are becoming then norm these days. But we’ll keep it old-school for the time being; take a listen.

Green money, green money,
Paper bills are green.
Starting with one to one hundred dollars,
And those that come between.

One dollar,
Two dollars,
Ten and twenty,
Bills in each amount.
Also fifty and one hundred
Dollar bills to count.

Green money, green money,
Paper bills are green.
Starting with one to one hundred dollars,
And those that come between.

Use this tune as an opportunity to explain that paper bills come in different amounts, and use a real (or real-looking) bill to show your child or student how to tell the difference between each. Emphasize that even though a dollar bill and one hundred dollar bill may look very similar, the latter is worth MUCH more than the former. You can also discuss making change, if you’re feeling extra ambitious! 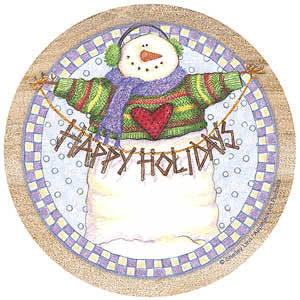 It’s that time of year again…holiday time, of course! Although I have been listening to Christmas tunes since the beginning of November, the rest of the world seems to accept Thanksgiving as the official kick-off to the holiday season.

And now that it is December, many classrooms are taking part in seasonal activities and lessons. So today I’m sharing my holiday-centered album with you, just in case you need any last-minute inspiration or songs to accompany your own lesson and session plans.

This Listen & Learn album contains 7 songs, all of which I wrote about in detail last December. The first track, “Holiday Time”, is a great way to introduce the topic and start conversations about not only Christmas, but all of the other winter holidays your students may celebrate.

It’s holiday time, so here is a rhyme,
For us all to sing together.
Spreading joy and good cheer,
This time of the year,
No matter how cold the weather.

It’s time for giving,
Helping others and being kind.
It’s time for sharing,
Which will make you feel good inside.

It’s time for parties,
Spending time with your family and friends.
It’s time for celebration,
Hope the laughter never ends.

And of course, I keep all the traditional Christmas songs on hand just in case a student should request one (as has happened in each class this week!) during a music therapy session. In fact, I am putting together a Christmas Singalong for the students of The Hope Institute in a couple of weeks, filled with all of their favorite holiday tunes. Which begs the question: what are your personal favorites? 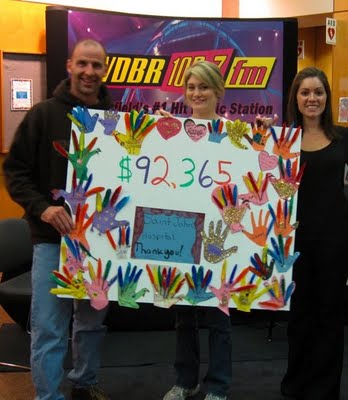 My experience as being a part of the WDBR Cares for Kids Radiothon was amazing from start to finish, but I’d have to say that the best moment of all was when they announced the total amount raised for the Children’s Miracle Network: $92, 365. Incredible, right? I just had to have my picture taken with the grand total, as well as Dave and Dina, the DJs who hosted all 31 hours of the radiothon.

So today I’d like to share the songs I contributed to the cause, which Dave so seamlessly weaved with the stories told by the Children’s Miracle Network families.

First is Hollie’s story, told in her very own words.

Beautiful, and strong,
On the outside.
Unsure and scared,
Within.
Smiling through the pain,
That held her back from feeling good,
In her own skin.

Beautiful, and strong,
On the outside.
Unsure and scared,
Within.
Faced with a choice,
She knew what she had to do,
To be herself again.

She had a hand to hold,
And heroes on her side.
Stood by her through the pain,
And gave her back her pride.
They changed her life, above all,
And now she’s standing tall.

She gave up something she loved
But it was well worth the trade.
As the hurt disappeared,
She was no longer afraid.
And through it all…

Next is Sam’s Story, so beautifully told by his parents, Katie and Gene.

They followed the rules, they went by the book,
From the food that she ate, to the classes they took.
Smooth sailing, the doctors said.
But God had other plans, instead.

They wondered if it was time, it was hard to know.
Could have waited, but instinct told them to go.
The calm before the storm.
As the tidal wave took form.

Like the blink of an eye,
It all happened so fast and they didn’t know why.
A moment frozen in time,
No explanation at all, no reason or rhyme.
Their faith placed in the hands,
That knew what to do,
To make a miracle come true.

She was whisked away, and he paced the floor.
He knew it was bad, they couldn’t tell him much more,
All he had was hope and prayer,
For his family in there.

A life was saved, but the storm hadn’t passed,
A long road ahead, each day better than the last,
Couldn’t hold him, but they knew,
They were doing all that they could do.

They called him a miracle,
Tears of joy for their baby boy.

I’m already looking forward to being involved with the radiothon and the Children’s Miracle Network again next year. And you know what else I’m looking forward to? This wonderful month of December! Today is the kick-off of what is sure to be a busy but fun 31 days, all of which are represented in my “December” song. Hear it here, and read what I had to say about it over on the Songs For Teaching blog.