I get lots of email from Listen & Learn readers. I try to answer each and every question that lands in my inbox, which sometimes takes me hours at a time. So instead of writing the same responses over and over, I thought it might be beneficial to share reader questions and my answers right here for everyone. The first question in my “Ask Listen & Learn” series is as follows:

The children I work with are hospice patients. Our goals center on bonding between mom and patient (not that they have problems bonding, it’s more creating memories) and getting a response from the patient. My patient’s response is declining, due to diagnosis, but the patient still responds to music more so than to other stimulation. AND the patient still communicates…will smile to show pleasure, and pouts when upset — will seriously pout by sticking out lower lip when we give the little sibling too much attention during session (it’s pretty cute) and will also turn head away and roll eyes if doesn’t like something (also very cute). I guess my request is for music that is less teaching a skill and more geared towards significantly lower functioning kids.

As a music therapist who works primarily with children in an educational setting, it is easy for me to get tunnel vision as I write my songs — so many of them do tend to “teach” a skill or concept. However, because many of my students are significantly lower functioning, I often adapt the majority of my songs to suit their abilities.

This being said, I am well aware that as busy therapists, parents and teachers, we don’t always have time to rewrite lyrics to existing songs in order to make them suitable for our own children and students. Here are a few Listen & Learn songs that may be appropriate as-is for this particular reader’s patient:

Another option for this patient is a singable story. This is something that not only you, the therapist, can do with the patient, but it is also an activity the parent and child can share on their own later. My personal favorite is The Story of My Feelings, by Laurie Berkner.

If you have a question you’d like for me to answer here at Listen & Learn, simply send me an email (and be sure to include that you’d like it shared on the blog). I would love for Ask Listen & Learn to become a regular feature! 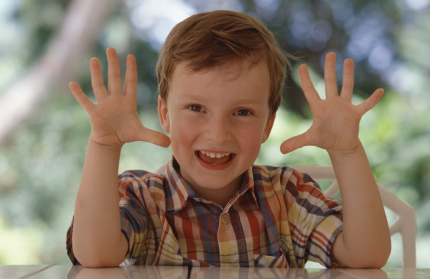 After four years of actively writing songs for children, I’ve lost count of the songs I’ve written about counting (no pun intended, hehe). It’s definitely not for lack of other song topics; it’s just that counting is a skill that every child needs to learn, whether it is through signing or speaking.

My latest counting song employs the use of our fingers. Not only does this give the child something visual and concrete to represent each number, but it also involves fine motor coordination and imitation – two more important areas of development.

Before and after singing the song, I invite the children to verbally and manually (with our hands) count to 10. I added lots of movement to this song so that it’s not just about counting. I also designed it as a cool-down song, meant to be sung near the end of the class, music therapy session, or what have you.

Like I mentioned at the beginning this post, I’ve written lots of counting songs. But it’s not all Listen & Learn, all the time, around here. I want to know: what are your favorite songs for teaching kids to count? Which have worked best for your own students and children? Let’s see how many we can round up!

This week, we’re celebrating and advocating for music therapy (even more so than usual) in the state of Illinois.  The Illinois Association for Music Therapy is holding its annual Fall Meeting and CMTE this Saturday at Illinois State University.  I’m especially excited, since as Secretary/Programming Chair,  I’ve been planning and preparing for this event over the last few months.  The perfect culmination of an entire week devoted to music therapy!

The goal of this week is to educate as many people as possible about music therapy and its many benefits.  The Chicago Tribune featured fellow Illinois music therapist Emily Sevcik in an article called Tune In to Music Therapy Week — how cool is that?  You can help join us in our efforts just by sharing links to Listen & Learn (you are here!) and the Illinois Association for Music Therapy via email, Facebook, Twitter, and so on.

Every week is Music Therapy Week for me, but it’s nice to have an “official” statewide one…especially since I get to spend part of it with my colleagues from all over Illinois (none of whom live near me).  I’m sure I’ll have lots to share with you after our event on Saturday.  Thanks for your support, and enjoy your weekend! 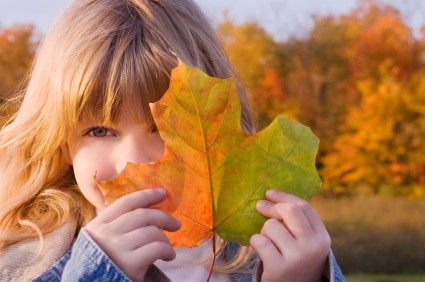 It’s officially here, even though the Midwest is experiencing temperatures in the high 80s to low 90s. We’re also experiencing quite a downpour this morning, which makes me glad to be safe and sound in my little music therapy office :)

As sad as I always am to see the summer end, there is so much to look forward to in the fall. I love watching the trees change color, and the cool, crisp air is refreshing after months of heat and humidity. I’m excited about getting out my pumpkin-scented candles, wearing sweaters, and making plans for Thanksgiving (I don’t give much thought to Halloween aside from writing songs about it, because it is my least favorite “holiday”).

I’ve written quite a few fall-themed songs, and I’ll share two of those with you today. “Fall into Fall” is one of the first songs I ever recorded (back when I had an extremely primitive recording set-up) so please disregard the not-so-amazing sound quality.

The second song is called “All About Autumn” and was written last year. I thought it was important to use the word “autumn” in a song, since the season goes by both names. It sounds like this:

So there you go: two songs for a brand-new season! Since I sing about the season every day with my students, it’s nice to have two to alternate so that they don’t get too stale. What are your favorite fall-ish songs?

That’s How We Ring & Sing 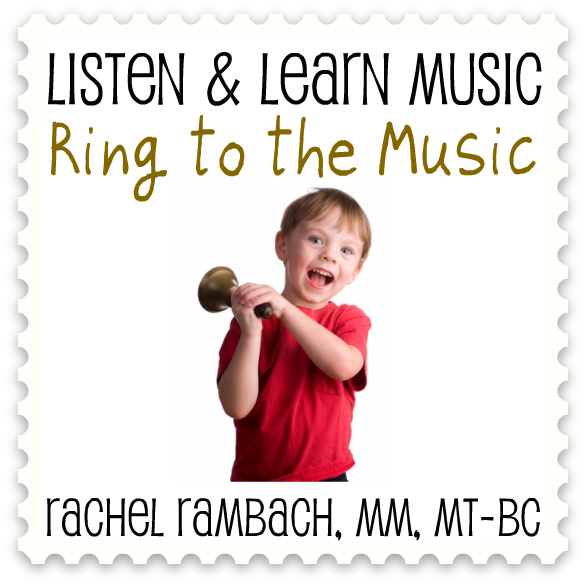 Handbells, jingle bells, sleigh bells, and resonator bells are all a part of my instrument collection, which is probably why I have so many songs about bells!  (Each word links to a different song.)  But last week I decided that I needed a fresh one to accompany my little bell players, so I adapted a traditional folk tune to get the job done.

The blank spaces in the song are there so that if being used in a group, I can go around the room and address each student: “Ring to the music, Jessica; ring to the music, Jackson” and so on. I can also add these verses to make the activity a little more interesting and challenging:

I tried this song out yesterday with my Church Mice group using tone blocks, and I’m happy to report that it was a success :) But really, anytime you ask a child to play an instrument quickly and/or loudly, it will most likely go over well! What are your favorite “bell” songs?