My Insurance Agent Taught Me a Lesson 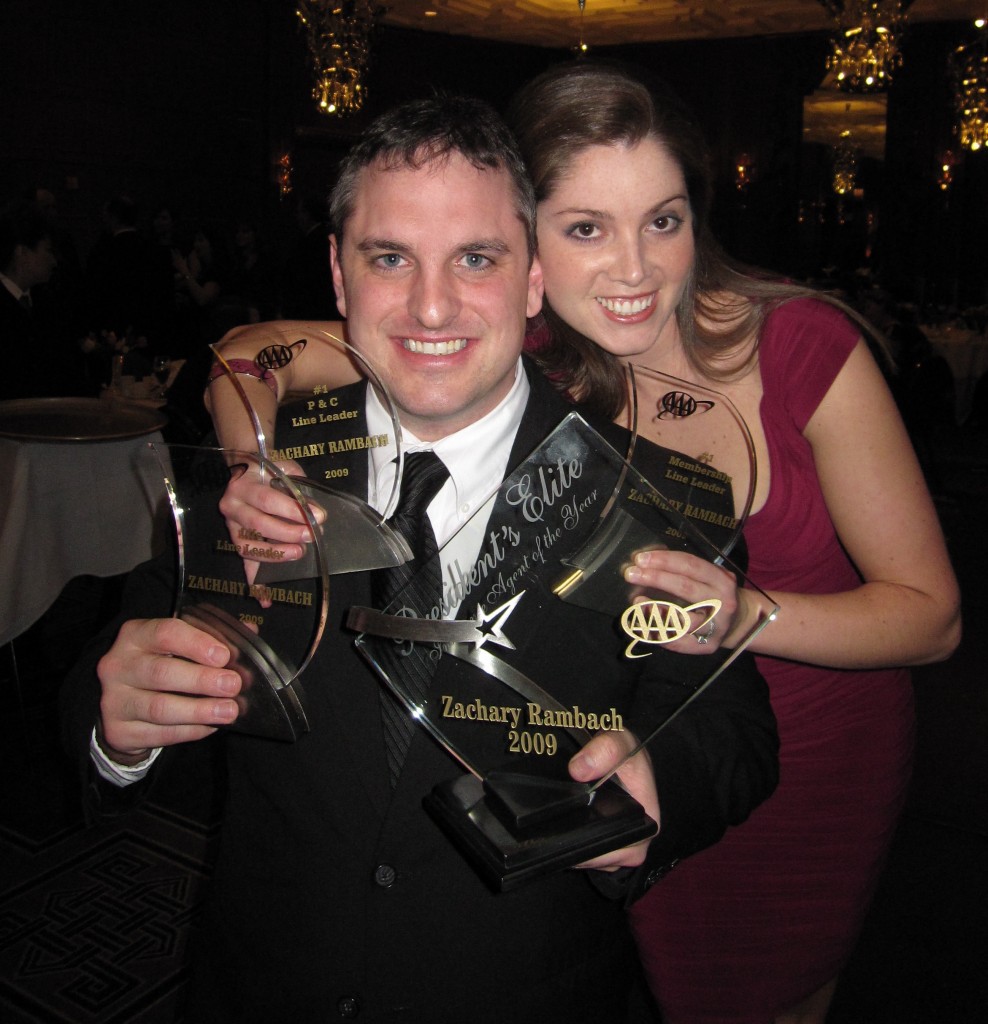 My insurance agent isn’t a music therapist; he doesn’t work with children, or even play an instrument.  But he did teach me a lesson that has been extremely valuable to my private music therapy practice and teaching studio.

The fact that my insurance agent is also my husband has no bearing on this particular story…I promise!  But it does come in handy when I need business advice, considering Zach has earned the title “Agent of the Year” in his multi-state region for the past two years.  He knows his stuff, and I know where he lives :)

Anyway, back to that valuable lesson.  Not so long ago, I asked my husband/agent what sets him apart from his colleagues when it comes to sales performance.  His answer?  “I ask for referrals.”

It’s that simple.  Simple, yet often overlooked as a business strategy.  Zach doesn’t assume that people will decide to call him instead of the other hundreds of insurance agents in Illinois, and he doesn’t spend any time cold-calling prospective clients.  Instead, he asks his existing customers, those whose trust he has already earned through exceptional service, to refer their family and friends to him.

I’m no stranger to word-of-mouth marketing.  However, I’d never thought to directly ask the families with which I work to send new referrals my way.  So in preparation for my upcoming summer session, during which I’m hoping to add 20 or so new students, I took a cue from Zach and did just that.

My families jumped at the chance, and even said that they’d been hesitant to do so in the past because they knew how booked up I already was.  Now, less than a month later, I have an active waiting list of 15 (and counting) new students who are willing to wait until June to begin receiving my services.   Word of mouth is a powerful thing — especially when those mouths belong to loyal and satisfied clients!

The next time I receive an email from a fellow music therapist asking how I “advertise” my services, I’m going to respond with a link to this blog post.  Sometimes it’s the simplest things that make the biggest impact, and I have my husband (the star insurance agent) to thank for reminding me of that. 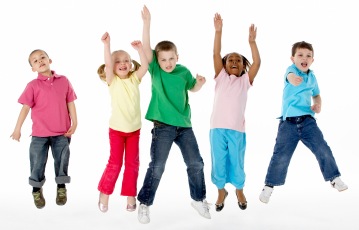 Sometimes I wonder if I’m really making a difference.  That question ran through my head just last night, in the middle of a music therapy session.  I’ve been working with this particular child since she was 4 months old; she’ll turn 4 years old in May.  She’s making big strides, but how much of that progress can be attributed to music therapy?

Towards the end of the session, I decided that we needed to get up and move a little.  I could see that she had energy to burn, and I wanted her to use it productively.  So I sang the following song, which I adapted from the wonderful Cathy Bollinger:

My student’s big sister was participating in the session, so both girls danced, jumped and marched (and played the nearby tubano drum, which wasn’t part of the song but added a nice beat!) while I sang and modeled the movement.

After the song ended, my student motioned for her mom to bring my music stand over to our rug. (For some reason, my little ones really enjoy standing in front of it while they sing.) As I strummed my guitar and sang the goodbye song, she sang right along with me, pronouncing the words as best as she could.

After she had taken “goodbye” off of the schedule and chased after her sister into the hallway, her mom turned to me — and that’s when I realized she had tears in her eyes.

She told me that today was the first time she’d ever seen her daughter jump, which surprised me immensely, considering she’d made it look so effortless. She also told me that the way she sang the goodbye song was leaps and bounds above her usual level of word pronunciation, not to mention the length of time for which she sang. And then she told me that it was all because of music therapy.

So much for those doubtful thoughts I’d been experiencing just minutes earlier. If my next student hadn’t already been waiting for me in the next room, I might have run outside and jumped for joy myself! 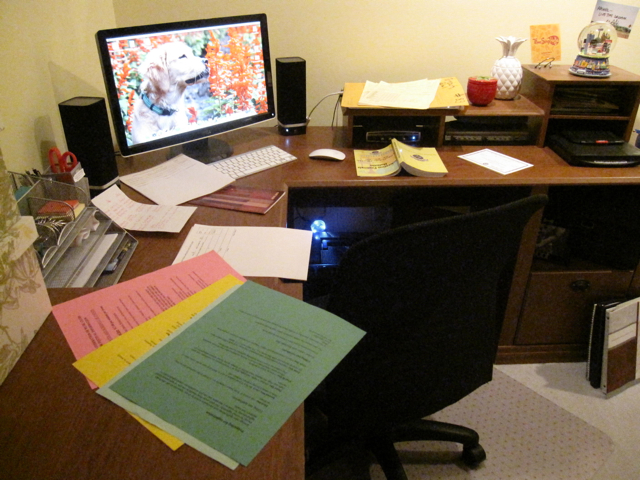 Recently, a reader wrote to me the following:

“I don’t know if you’d want to blog about your desktop but I’d like to know…is your desk always so ordered?  I have a feeling you have an ability to clear the desktop daily. I am consistently in the midst of so many huge projects with my classes, well, I see the top of my desk 3 times a year.  One of my goals this year is to see my desktop more than 3 times a year.  Maybe you could show us what your desk looks like when you are REALLY in the swing of things.”

It’s confession time.  I always have to organize my desk for photos, because it definitely does NOT look this neat on a regular basis.

In the picture above, I was in the midst of filling out student applications for my local federation of music clubs’  upcoming Junior Festival.  This was right after I received the email, so it was the perfect opportunity to capture the evidence of my cluttered desktop.

So even though I’m guilty of the occasional messy desk, I’ve become very good at making it appear neat and tidy.  I really have no choice, considering there are students and parents in and out of my office/studio on a daily basis.  But what they don’t notice is my inbox tray stuffed to the gills, the papers concealed under a music book, and the sticky notes tucked into a drawer.

Despite all of these confessions, I do have some tips that help keep the visible clutter to a minimum and maintain my sanity.

And just in case you thought perhaps the picture up top was staged for this blog post, here’s another one (taken back in the day, when I still had my old Macbook and warhorse printer) to prove my occasional desk messiness. 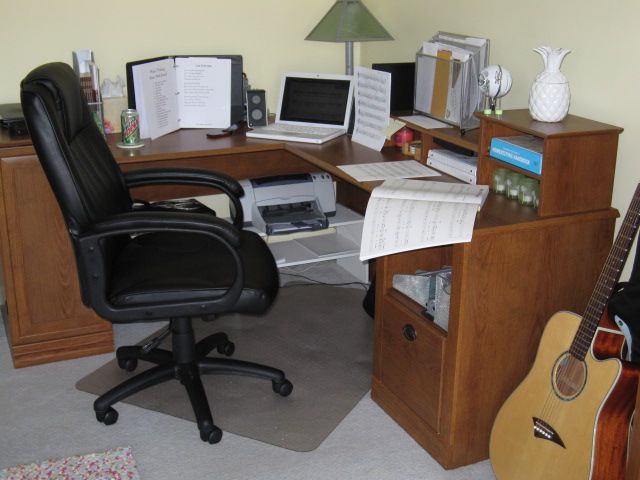 What about you?  Are you one of those people who always has a perfectly tidy workspace?  If so, please add your tips in the comments.  And if you’re a total slob, tell us about that too so we can all feel better about ourselves.  (Just kidding, sort of.)

At school one day last week, one of my coworkers told me that she had watched every one of my videos (there are almost 50 now!) and was sharing them with all of her friends.  Before I left for the weekend, she told me she was looking forward to today’s video…and the pressure was on.

Well, not really, but I wanted to make sure this week’s video was a song she would enjoy.  That’s why I picked Laurie Berkner’s “I’m Gonna Catch You”, which my students and I have been working on throughout the month.

There’s a little guy in one of my classes who came up with full choreography, which includes spins, jumping, and some unique moves that I don’t think have names.  I actually thought for a split second about doing the choreography in the video (reminiscent of the Turkey Dinner Dance) but decided I wasn’t quite brave enough…maybe next time :) To be honest, I’ve never collaborated with another songwriter when it comes to music therapy/children’s songs.  (Unless you count therapeutic songwriting with students or piggyback songs, that is!)  I’ve definitely used input from custom song clients, teachers, parents and others, but the actual process of creating the song is an independent one.

However, I do have a songwriting partner for other kinds of music.  My mom and I have written wedding songs, choral Christmas pieces, songs for nonprofit organizations, and more over the last five years or so.  We both bring our own strengths to each project, and the finished product reflects a nice mix of our styles.  Goulet & Rambach has a nice ring to it :)

I’d love to collaborate with other music therapists at some point for a breath of fresh air and new inspiration.  Any music therapy songwriting duos out there we should know about?  Maybe you’re half of one — if so, let me know!