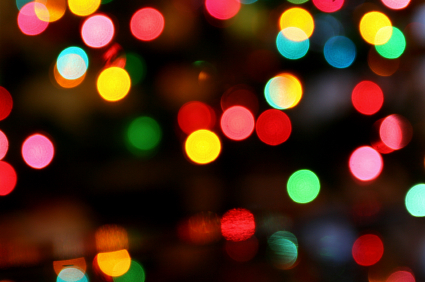 I wrote this song over two weeks ago, but just now got around to recording it after getting sick and then going on vacation. It’s been running through my head all this time, so it feels good to get it out and share it with you.

Christmas is only days away, and yet this is the only holiday song I’ve written so far this year. It has a much different feel than others I’ve written in previous years; it’s more laid-back and sounds a little more grown-up to me. I think that fits with the subject matter, though — this song makes me want to take a stroll through my neighborhood and admire all the lights twinkling at night.

This is my last week with students before the holiday break, so I’m going to be getting as much use out of my holiday repertoire as possible. My original songs and all the traditional standards have been in high demand all month, not that I’m complaining! 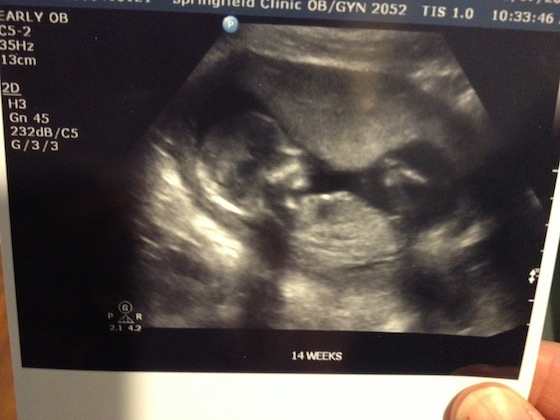 I got to take a surprise peek at Baby Rambach this week! There was lots of moving around and kicking, and in this picture, the baby is waving at me. I also got to hear the heartbeat, which was 168 bpm.

After the ultrasound technician made sure that everything looked okay, I asked if she could tell whether I’m growing a little boy or little girl. She said she saw a little something between the legs, and that if she had to guess at this point, she’d say it was a boy. However, my doctor told us not to buy anything just yet…they told her the same thing about her baby at 14 weeks, and then at 20 weeks they told her she was actually having a girl.

Up until then, I was convinced that I was having a girl. But when I heard “boy” I got super excited — I will be thrilled either way. We’ll know for sure in about a month! 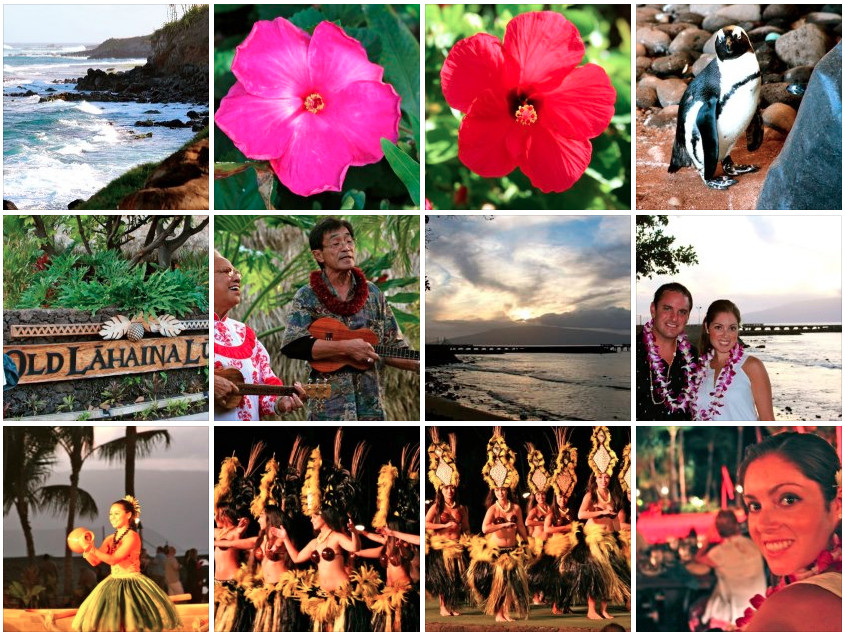 2012 has definitely been the year of amazing vacations. Our tour of Europe back in August was the trip of a lifetime, but last week’s Maui vacation was a close second.

I have never seen a more naturally beautiful, tropical or peaceful setting than Maui. My family vacationed in Honolulu when I was in high school, but this part of Hawaii was completely different. Of course, the resorts and pools were gorgeous, but the mountains, beaches, ocean, sunrises and sunsets were the real shining stars.

As usual, Zach took plenty of photos to document our trip. It will always be really special to both of us, not just because we had such an amazing time, but because it was our first “family” vacation — technically, Baby R. was along for the ride :)

One of the things we noticed was that there were LOTS of families with babies and young children in Maui, which already has my wheels turning for a return trip in the coming years.

It was definitely hard coming back to freezing temps and the bleak Midwest after a week in paradise, but we have plenty to keep us busy between getting ready for Christmas, playing with Sadie (who we always miss SO much while we’re away), and preparing for a very exciting new year! 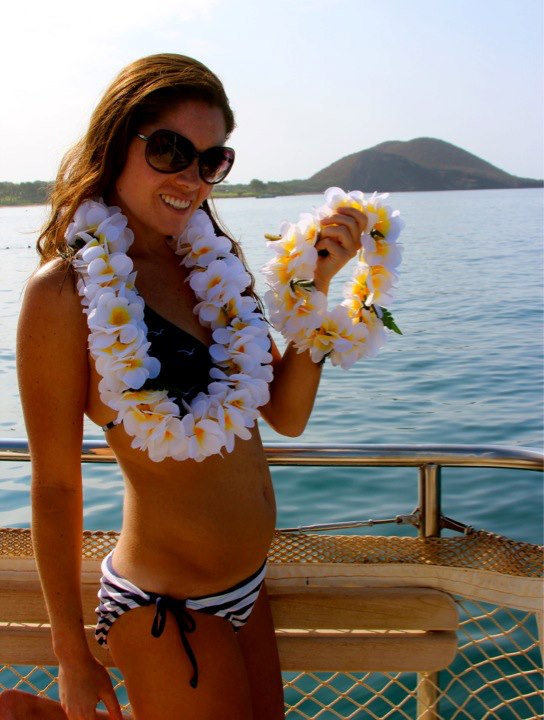 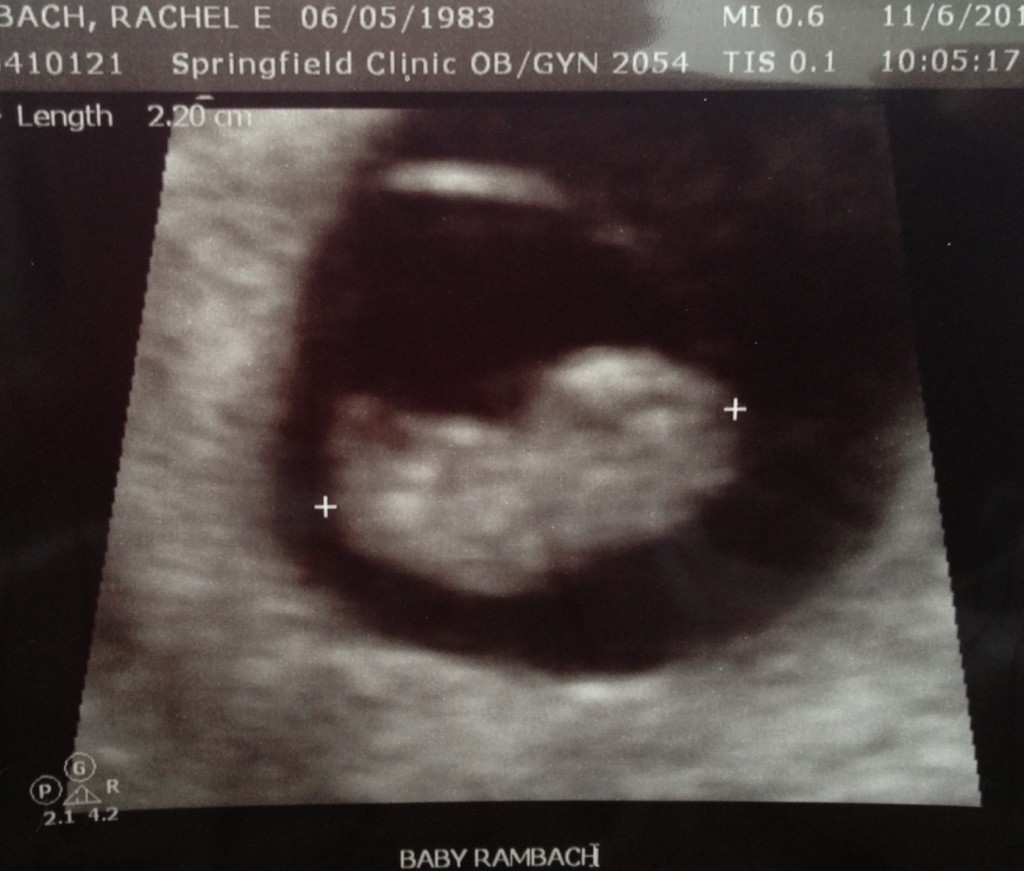 I’ve never been good at keeping secrets, so I’m thrilled that I no longer have to keep this in: I’m going to have a baby! The ultrasound picture above was taken in November at just 8 weeks, but now that I am 14 weeks along, Baby Rambach has grown to the size of a lemon. Amazing!

I found out that I was pregnant on October 6, just a few days before the national music therapy conference. I couldn’t resist letting a few people in on my secret, including my partners in crime, Michelle Erfurt (who is also pregnant and due in less than a month!) and Kimberly Sena Moore (who was my conference roommate).

My husband Zach and I were thrilled and relieved to finally make the news “Facebook Official” last week, when we posted this photo taken on our vacation in Maui. It feels a whole lot more real now that everyone knows, and also now that I’m starting to get a little bump.

I announced the news to my students and their parents earlier this week, and while everyone was very excited and happy for me, I had a few concerned students who thought this meant I would no longer be their music therapist or teacher. I alleviated their fears immediately, though; I will most definitely be returning to work after a few weeks off this summer. The due date is June 14, less than two weeks after my 30th birthday…talk about the best birthday gift ever!

I’m so excited to be joining the “club” of music therapists who are moms and moms-to-be, not to mention that I’ll have my own personal audience at home to listen to all the songs I write :)