The Evolution of a Nursery

One of the reasons I fell in love with our house was the room right off the front hallway with the big, pretty windows. For two years, it served me well as a home office and studio. 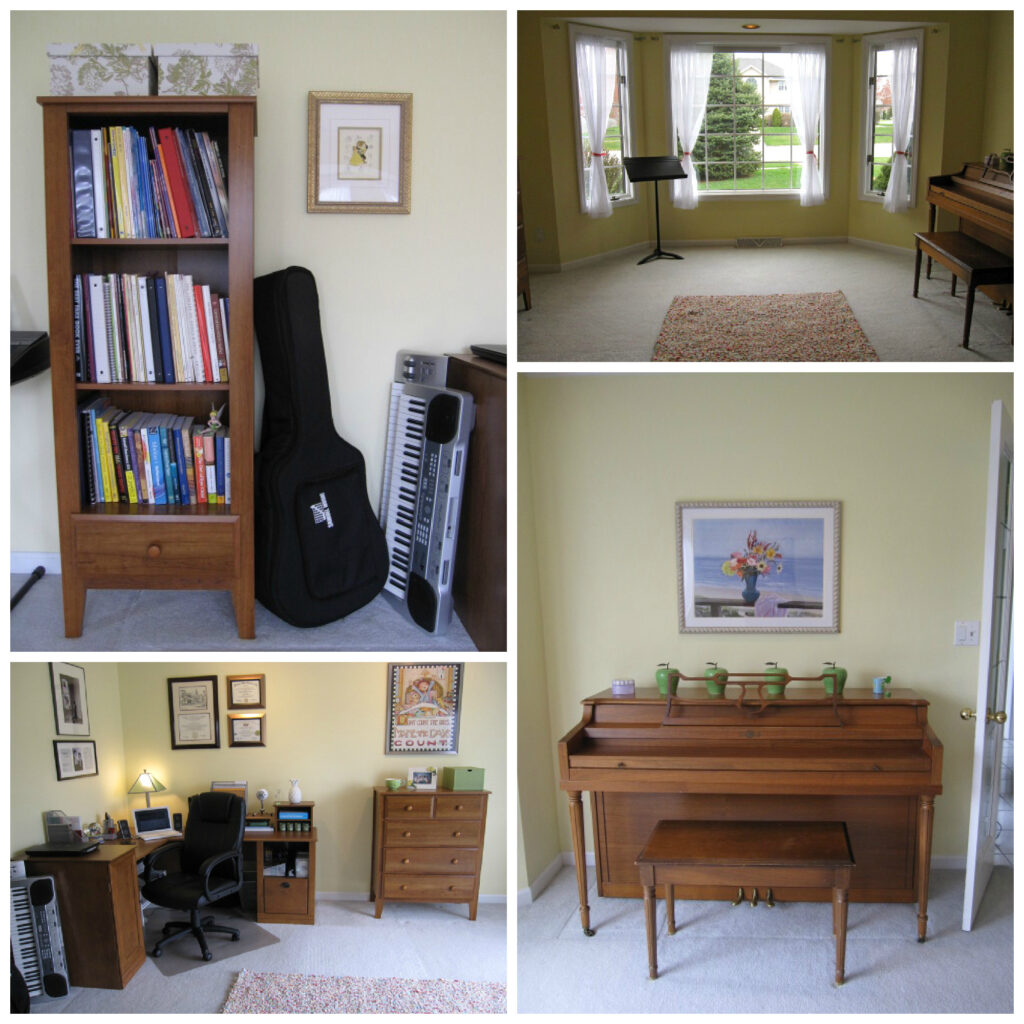 Eventually my studio outgrew the room, so we converted the two back bedrooms into a waiting room and office/studio space. So for the last two years, that pretty front room has been sadly neglected (except for in December when we’ve put the Christmas tree up in front of the windows). That will soon change, though, because it’s about to become Baby Rambach’s nursery! 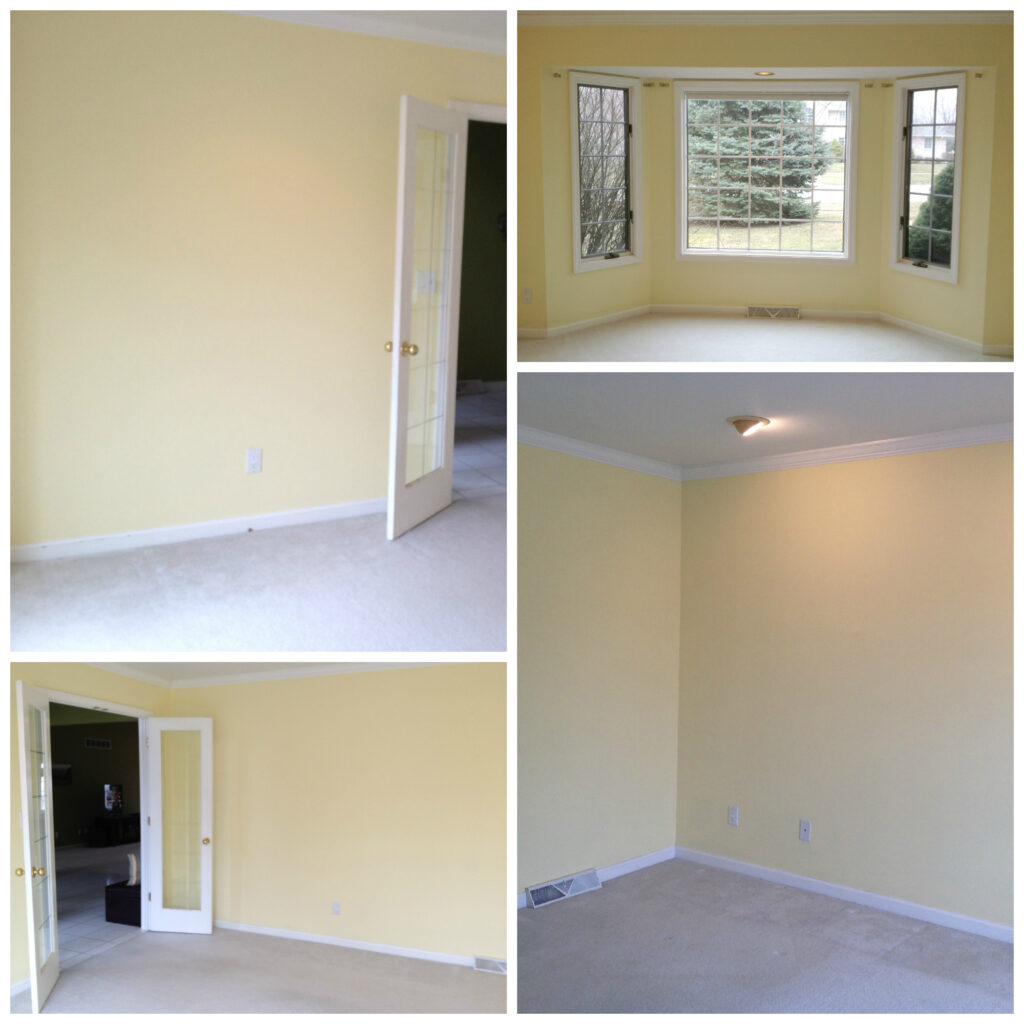 Now that we’ve cleared out the daybed and bookcase that found a temporary home in this room, it’s completely empty and waiting to be filled with furniture. Today our painter came and touched up the crown molding, and the carpet is being cleaned on Wednesday. Hopefully by next weekend, the furniture will be assembled and in place…but for now it looks like this: 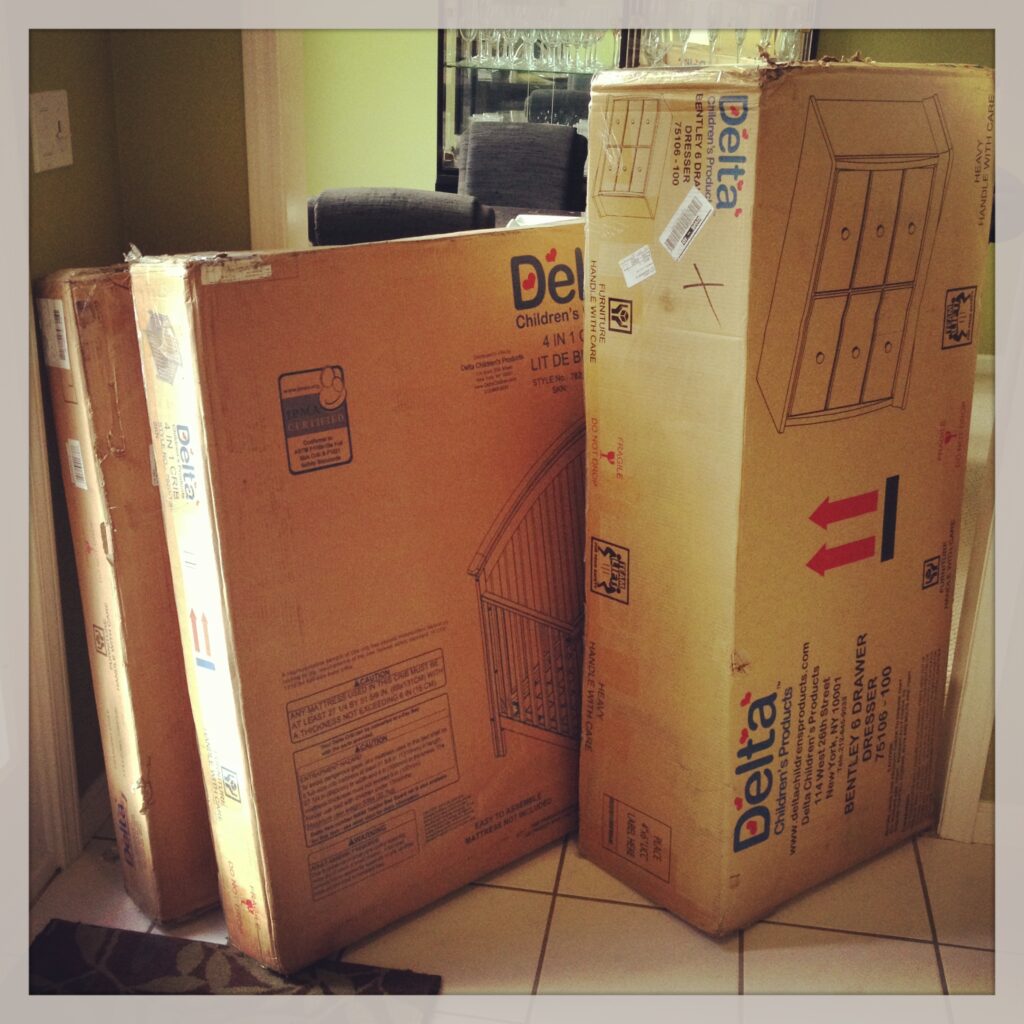 These gigantic boxes have been sitting unopened in the front hallway for several days now. I can’t wait to get everything set up so that I can start decorating — until then, I’ll just keep collecting ideas on my Pinterest board. 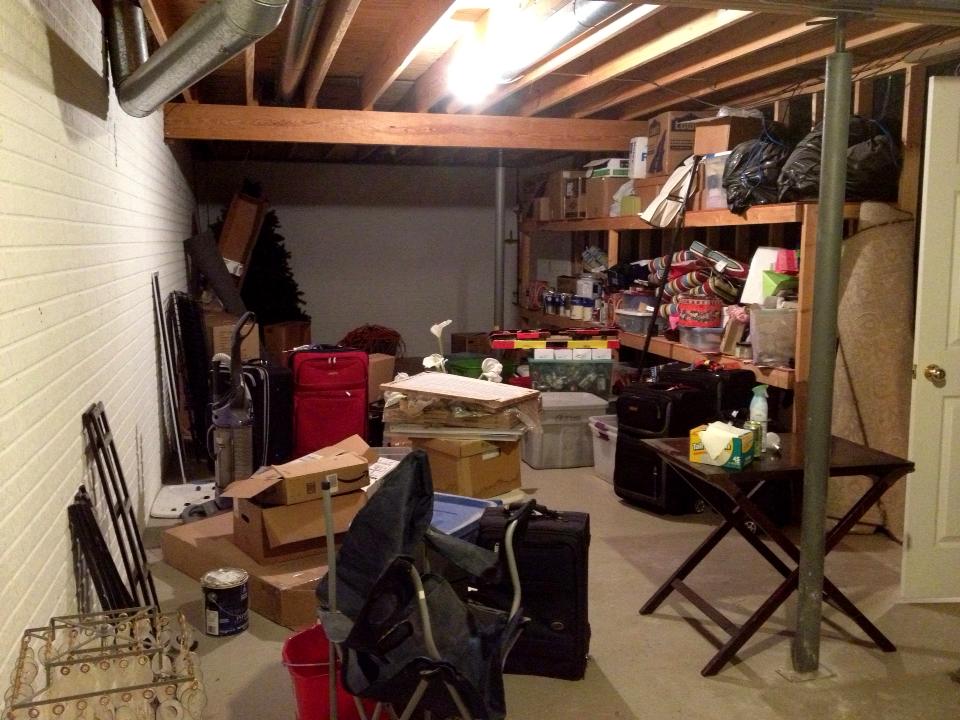 This is what our basement storage room has looked like since the great flood of 2010. Almost three years later, after living in denial that this room even existed, the nesting urge kicked in hard and I decided it was time to tackle it.

Zach wasn’t quite as excited as I was about whipping this room into shape, but he was a great sport. He took every single thing off of those shelves, and we went through all the boxes to decide what was worth keeping and what we’d be trashing. We filled the next room (our little boy’s future playroom!) with all the stuff that didn’t make the “keep” pile, and soon were left with a fairly empty storage room and a GIGANTIC trash heap.

Guess who then made about 12 trips to the dumpster? Zach was a trooper once again, hauling everything upstairs and out of my sight forever. While he did that, I organized the rest of the shelves in the basement and wiped down all the tile dust that still remained from the post-flood basement renovation. After all that work, we were finally left with a room that looked like this: 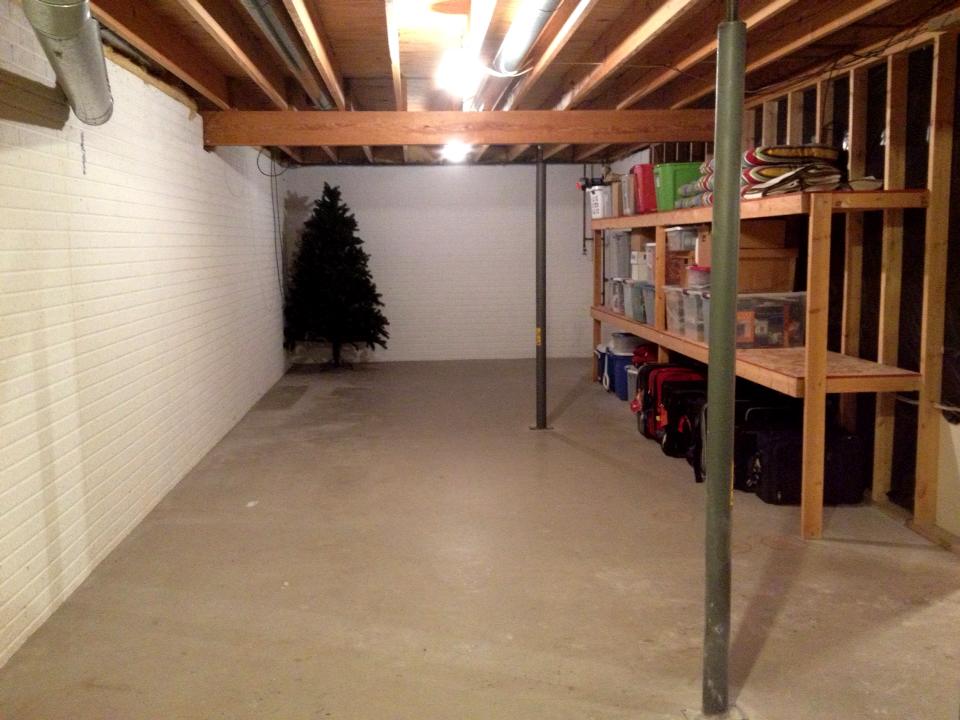 I can hardly even believe it’s the same room as the one in the “before” photo. It’s no longer a safety hazard to walk in, and I actually know where everything is! A miracle after three years of disaster zone status. Everyone keeps telling me we’ll accumulate TONS of stuff once the baby arrives, so now we have a nice organized storage space to put everything that gets displaced by baby gear.

The nesting bug bit me hard, because I didn’t stop after finishing the basement. Next, we tackled the future nursery, which meant dismantling the daybed in there (and laundering/putting away all the linens and pillows) and completely clearing everything else out. Then I moved on to the laundry room, for which I bought matching storage bins and organized everything that had been cluttering up the shelves in there. The next day, I did a clean sweep of the master bedroom, closet and bathroom.

So what’s next? I have a huge list of all the projects I want to pursue now that the spring cleaning is mostly done, starting with the nursery. I can’t wait to get to work setting it up! 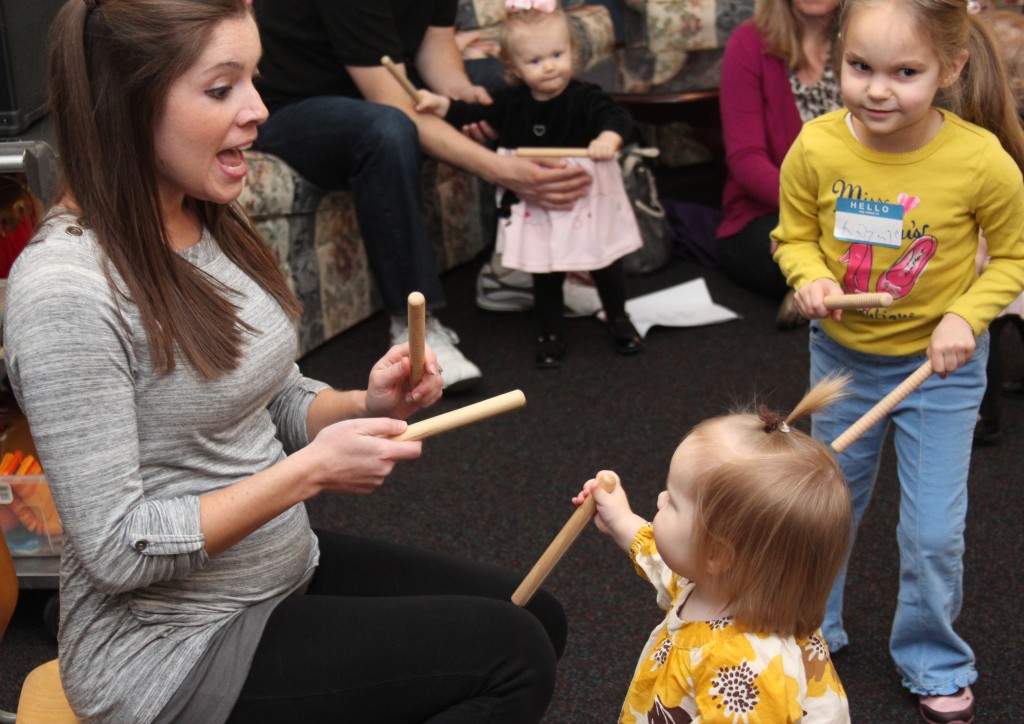 With spring less than two weeks away, it’s beginning to hit me that this baby boy will be here not long after. As I approach my third trimester of pregnancy, I thought I’d share my thoughts thus far on working as a music therapist while expecting (a ‘la Michelle Erfurt, who wrote the Pregnant MT blog series before having baby Eddie) in the form of the top questions I’m asked on a daily basis.

“How are you feeling?”

One of the many awesome things about my job is that I see LOTS of moms every day. They’ve all been in my shoes, so they know that pregnancy has its ups and downs. I get this question several times each day, and luckily, the answer is almost always “great!”. I have been super fortunate that this pregnancy has been relatively easy, especially in these last few months. Of course, I get pretty tired towards the end of the night (my last student is out the door at 7:30 pm) but other than that, I feel pretty fantastic on most days. Oh, and also the “you look great!” comments…those never get old :)

“Is the baby kicking right now?”

The baby is actually at his most still during my hours in the studio, so the answer to this question (posed quite often by my students) is usually no. However, I have noticed that every once in a while, I’ll get a kick or a jab during a song, which I usually will share afterwards with a curious kiddo. I tell them, “The baby must have really liked your singing, because he was dancing along!” and boy, do they get a kick out of that — bad pun intended.

“What’s your baby’s name going to be, Miss Rachel?”

I have two students in particular who are very curious about what we’ll be naming Baby Rambach. Each week, not only do they ask if I’ve picked out a name, but they also have plenty of suggestions for me. I have to say, they are much more creative than anything Zach and I have come up with! The truth is, we have narrowed down our list to a couple of names, but we don’t plan on sharing them until after the baby is born and we’ve made a definitive choice.

“Will I still see you after you have your baby?”

A number of parents have shared that their kiddos were worried I would no longer be their music therapist or teacher once the baby is born. And while I’ll definitely be taking a longer break than usual this summer (the baby is due on June 14th), I most certainly plan to return to work full-time by the end of August.

“Can I play with your baby when I come for music?”

Since my students see me here in my home studio, it’s only natural for them to assume that the baby will be around during their sessions and lessons. After all, most of them have seen my dog Sadie at one time or another. While we haven’t quite figured out our plans for child care during those couple of hours when the start of my workday and the end of my husband’s overlap, the baby most certainly will not be sitting in with my students (much to their dismay). However, I will probably have a meet and greet day this summer when my families can come over and see the baby.

While it’s a fun topic of conversation, pregnancy has not had a huge effect on my work as a music therapist and teacher. Yes, playing the guitar is getting a bit more awkward as my belly grows, and I run out of breath much more easily while singing, but if that’s the worst of it, I have it pretty good! It will be interesting to see where things stand when I’m further along…my spring sessions ends on May 31, at which point I’ll be 38 weeks pregnant. Here’s hoping that the baby waits until at least June 1st to make his appearance! 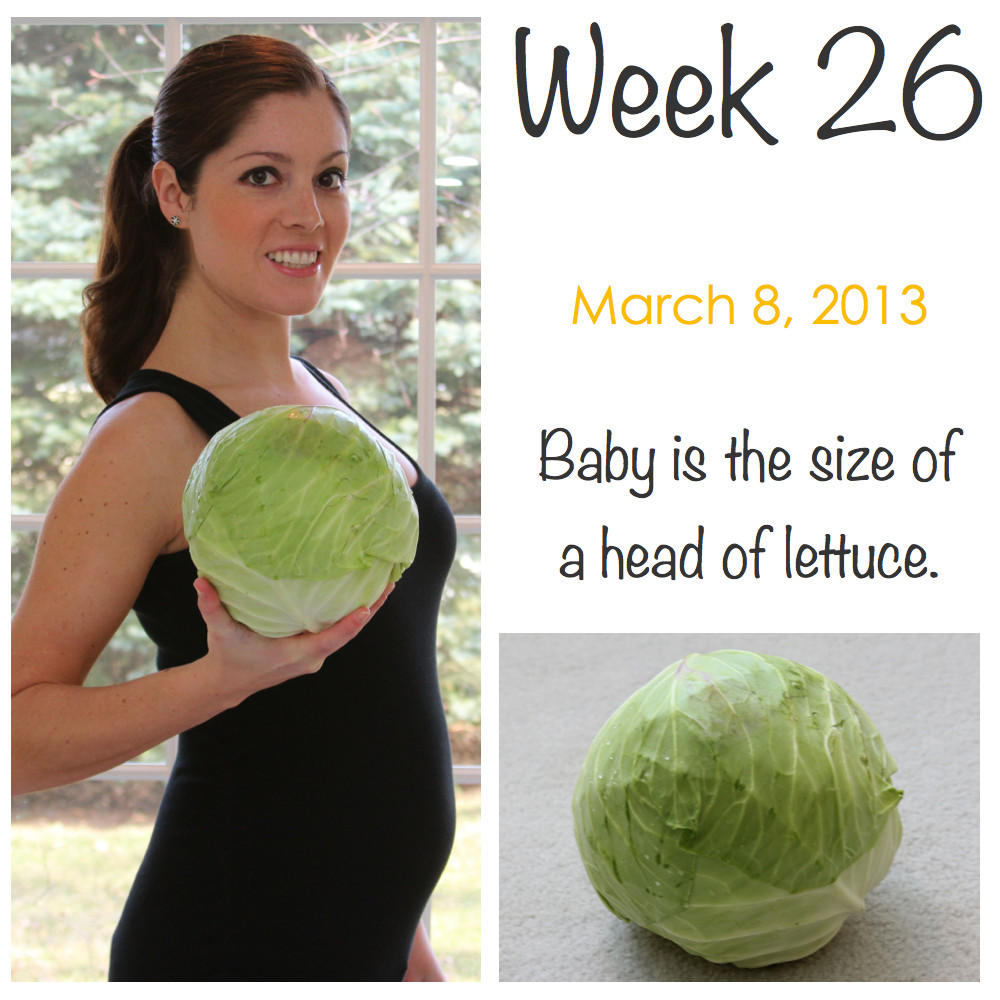 Week 26 has been a good one. I am feeling better than ever lately, and life is going just swimmingly. Work has been fantastic between my students, my online business, and my new class, and I’m excited about working on some new projects. I’m also getting really pumped to finally get to work on the nursery (beyond just collecting ideas on Pinterest) and the downstairs playroom.

This past weekend, Zach and I ordered our first BIG baby item: the stroller! I spent hours and hours researching, and finally chose this one based on the great reviews and its versatility. We have my grandma to thank, since she bought it for us — I told her we’ll think of her during all those walks we’ll be taking this summer.

Then yesterday, our changing table was delivered to our front door, thanks to my mother-in-law. All of these baby items are currently occupying our huge closet in the basement, and it will be so nice to finally get everything put together and moved into the nursery. I love how real this is all beginning to feel!