My first Thanksgiving post of the season! I love, love, love this time of year and the songs and activities I have to go along with it. The 10 Days of Thanksgiving is my favorite of all, which is why I blog about it year after year.

This time around, I decided to do something new; I took the visual aide I created and set it to the music, as you saw above. My students love using the iPad in our sessions, so now I can play the video if I don’t feel like using the good ol’ fashioned paper version.

Every time I sing this song, I’m reminded of all the goals and objectives that can addressed: counting, memory recall, reading and sight words, singing along, attention to task, and more. In addition to all that good stuff, I love that it gets everyone excited for the holiday.

The video is available on YouTube, but members of Listen & Learn Plus! get the download (so that it can be used without an internet connection) — along with an instrumental version so that you and your students can sing without me. 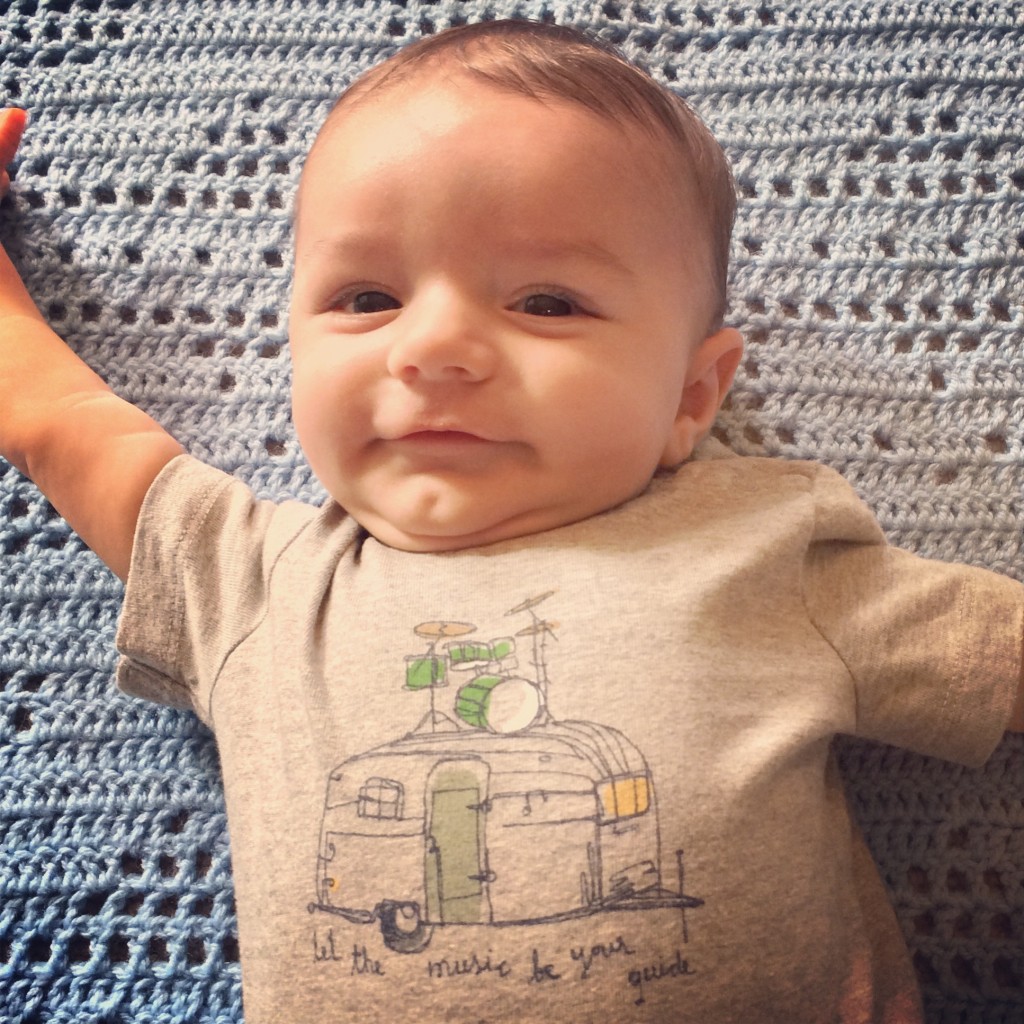 Since the day we brought him home from the hospital, Parker has been exposed to lots of music. (Shocker, right!?) I’ve sung him all the traditional children’s songs — it took me a month to be able to get through “You Are My Sunshine” without crying, thanks to those lovely postpartum hormones — but I definitely didn’t stop there.

Broadway, Jason Mraz, Frank Sinatra, The Civil Wars…he’s heard it all. And while Parker seems to enjoy just about any song I sing to him, his clear favorite is this one.

A Bushel and a Peck has become my go-to song for Parker, especially when he’s upset. It instantly cheers him up and makes him giggle, which is pretty much my favorite sound in the whole world :)

So I’ll keep singing this song a million times a day, but I’ll also keep trying out lots of others. I wonder what his next favorite will be?

Parker rolled over onto his belly for the first time almost exactly two months ago, but it wasn’t until this week that he showed any interest in rolling onto his back. While he was playing on his piano mat the other day, I noticed that he was attempting it, so of course I pulled out my phone in the hopes of catching him in action.

Talk about determination, right!? He definitely struggled the first couple times, but once he learned to get his arm out of the way, he was a rolling machine. Now anytime I lay him on his back, he flips over to his belly in the blink of an eye. Here’s a video I took of him this morning. Notice the progress since yesterday!

Diaper changes have become quite the challenge, because Parker doesn’t have time for laying on his back long enough to get a new diaper fastened. He got to show off his new skill today at baby group, although I think he is jealous of the babies who are already sitting up and starting to crawl. Those things are next on his list!

The first thing I noticed when I looked at Parker’s 20 week photo was how chunky those thighs are getting! He’s nowhere near a “chunky monkey” but it seems like he adds a new little roll every day. Yay!

This week has been a big improvement over last — mostly because Parker (and therefore, all of us) slept much better. Not only are our nights more restful, but Parker has been either sleeping in or going back to bed after an early morning feeding, which has given me some time to work or be productive around the house.

This is a pretty typical snapshot of Parker playing in the morning after he wakes up. Hanging out in his footie pajamas, wishing his feet were bare so he could snack on them. What a goofball.

We kicked off the week with a day trip to Peoria, since Josh and Jeni (my brother and sister-in-law) were in town. They moved to Denver over the summer and hadn’t seen Parker since he was brand new. The funny thing about this picture is that the baby had just spit up all over Josh’s sleeve, so I wiped it up with a paper towel and kept taking photos until I got a keeper. Needless to say, Josh was ready to hand Parker back over at that point.

Poor, poor Sadie. On top of having to deal with a new baby these last few months, she’s had TERRIBLE allergies since August. After several trips to the vet and different treatments, she finally got an allergy shot this week that seems to have done the trick. But that hasn’t stopped her from being a big couch potato every night.

Recently I put together Parker’s high chair, and it has been awesome letting him sit in it while I do things in the kitchen. He will entertain himself with toys for a good 20 minutes or so, and I’ll pull him up to the kitchen counter with me while I eat lunch. He looks like such a big boy sitting in it!

Parker celebrated his first Halloween this week, and of course, he had an outfit dedicated to this occasion. He also had no fewer than 3 “My 1st Halloween” bibs, courtesy of Grandma Libby. With all the drool he has been producing, we actually did make use of all 3 over the course of the day.

Lately Parker has wanted NOTHING to do with laying down. He is a BIG boy, and wants to sit up like one. Unfortunately he can’t do it on his own yet, which is what Mommy and his Bumbo seat are for.

As I was going through my photos, I realized that I only have a handful of Parker and I together. Mostly I just have a million of him all by himself. These aren’t the best quality since I took them myself, but I like them because Parker looks so darn cute :)

Last but not least, here’s a quick video I took of Parker reacting to me singing his favorite song, “A Bushel and a Peck”. I have sung tons and tons of songs to him, but this is the one that always makes him smile and cheers him up when he’s crying. If we are in the car and he gets fussy, I play the version I recorded on my iPhone over the speakers and he instantly calms down.