This little elf is officially half a year old! At 6 months, Parker is experiencing all kinds of exciting new things and hitting some major milestones. He checked out wonderfully at his wellness exam: he’s still a little peanut weighing in at just under 15 pounds (6th percentile), but he’s a string bean as far as length goes (76th percentile). The pediatrician is happy with his weight gain, though, and says he is doing great on his own little growth curve.

I’ve been slacking on the weekly blog posts with everything we’ve had going on — it’s been a crazy busy month! Zach and I have been talking about replacing the flooring in the living room, dining room, front hall, laundry room, bedroom, and nursery for YEARS, and we finally took the plunge this past week. Needless to say, it was a big job that necessitated staying at my parents’ house down the street for almost an entire week.

But it was 100% worth the hassle, because the new floors look awesome. It honestly feels like a brand new house! I was so happy when we were finally able to decorate for Christmas and put up our tree this past weekend. My next project is wrapping all the presents that are piling up downstairs, and of course getting ready for our annual holiday party on Monday night.

Now back to Parker. Along with celebrating his six-month birthday, he is also starting to sit up on his own really well (we’re talking minutes at a time!). Just today he figured out how to get up on his knees, so I’m thinking he’s not too far away from crawling. And THAT is a little scary, because I have a feeling once he starts, he’ll never stop moving.

Another “big boy” moment: Parker’s first taste of food! I made an avocado puree, and you can see from the look on his face just how much be enjoyed it. Maybe the next food we try will be more successful.

Tomorrow is my last day of work for the year, and then I have two whole weeks off to hang out with Parker and the rest of my family. Be ready for an onslaught of adorable Christmas photos!

This weekend, Parker will turn 6 months old. And it kind of blows my mind to think about the fact that I have provided every last drop of nourishment for his entire life thus far. I knew before Parker was born that I wanted to try breastfeeding, but I had no idea how much I would enjoy it and how important it would become to me.

I also had no idea what a huge commitment it would be, and that there would be bumps along the road. I was extremely lucky that Parker latched on right away and the first few days went so smoothly, but I’ve dealt with quite a few plugged ducts (even as recently as this week) and supply issues before I realized I was exercising too much and not eating enough. Those were easy fixes, to say the least!

Being a nursing mom is a full-time job, or at least it feels that way at times. I feed Parker every 2-3 hours throughout the day, and on top of that I pump at least twice so that he has bottles when I’m working. As soon as I finish work at night, we do bath time and then I nurse Parker to sleep, which can take anywhere from 15 minutes to an hour.

And I’ve excused myself from parties, family gatherings, and dinners on countless occasions — not because I’m opposed to nursing in front of other people, but because Parker is SUCH a distracted eater. If there are other people around, a TV or music playing, or even bright lights on, I can forget about a successful feeding.

But I wouldn’t have it any other way; I never take for granted the fact that I’ve been able to breastfeed this long. I’ve been a little reluctant to start solid foods just because breastfeeding is so convenient (no preparation or cleanup involved!), but I’m pretty sure Parker will love exploring new foods. Not to mention that it will be super cute, messes and all.

The older Parker gets, the more busy and wiggly he becomes. Our daytime nursing sessions are getting shorter and shorter, but I look forward to cuddling him at night and nursing him to sleep. I know I’m going to miss it so much when it’s all over, and I can only hope to make it at least another six months.

This week brought a BIG first in Parker’s life: baby’s first Thanksgiving! I’ve said it before, but I’ll say it again — having a baby in our lives makes everything more exciting and joyful, especially holidays.

Thanksgiving is always a pretty low key day in our family. Parker slept through the night and didn’t wake up until around 8 that morning, which was a nice treat for mommy and daddy! We lazed around the house in our pajamas (not surprisingly, Parker had multiple pairs of themed jammies for the occasion) and then Parker hung out with Zach while I baked cookies to bring to dinner.

We headed to our first dinner with my family, hosted by my mom and Joe, where Parker got to hang out with my cousin Steph and my aunt Julie. After that, we made a quick stop at my uncle and aunt’s, and Parker spent some quality time with grandpa Alan.

Our last meal of the day was with Zach’s family at his cousin John’s house. All of the Rambach cousins were there, so Parker had lots of playmates. It was an awesome day filled with family, and as much fun as we had, it felt so nice to come home and relax as a little family of three.

{Mama Moment} Pianist in the Making 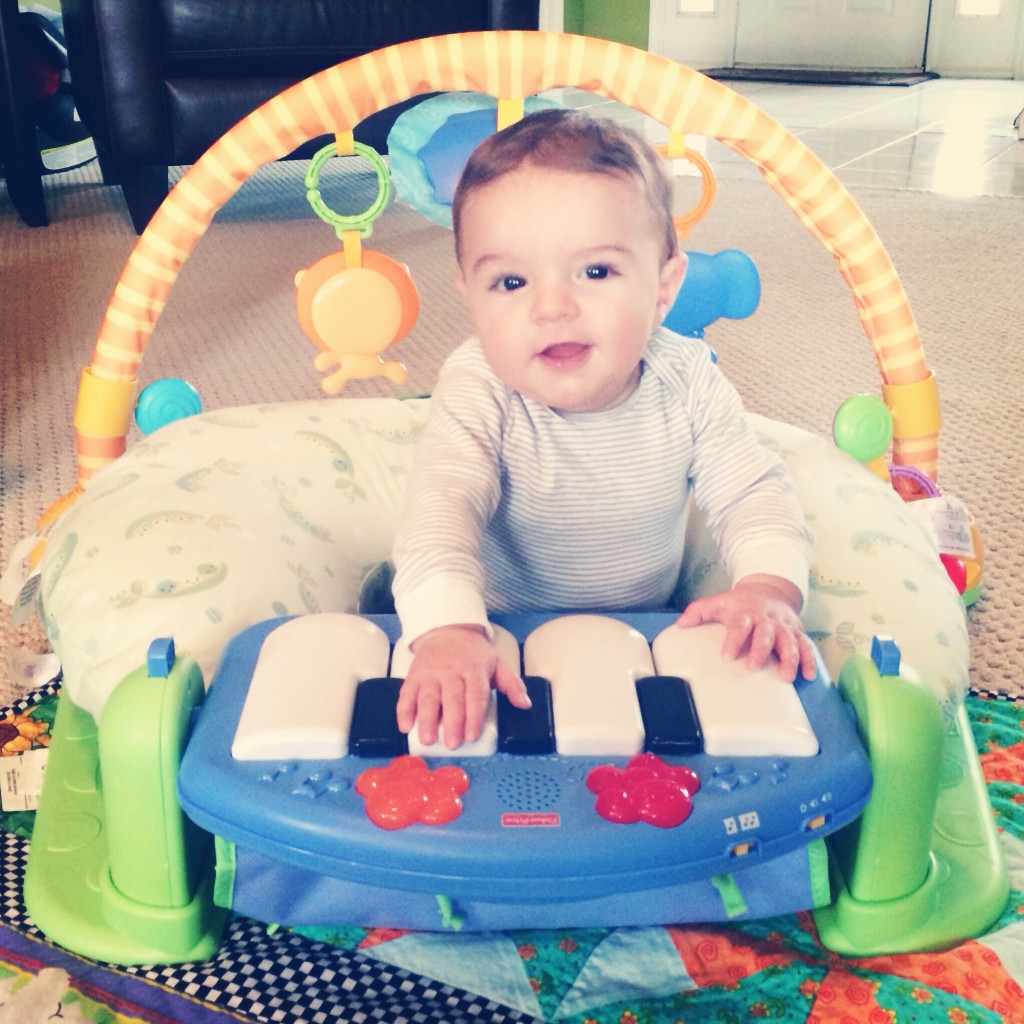 From the time he was just one month old, Parker has been a huge fan of his kick ‘n play piano. He’s spent countless hours on that mat, kicking away at the keys to the point where I have every single tune completely memorized. It’s where he first learned to grab at toys, and he perfected his rolls on that mat as well.

Add another skill to that list: he’s working on sitting up on his own with the help of his little piano. He hasn’t mastered it yet, but when I place his boppy pillow behind him, he does a pretty great job staying upright and tickling those ivories at the same time.

It’s so exciting to watch Parker discover all the things he’s capable of, especially when they are musically related! Everyone always comments on his long “piano-playing” fingers; this is just the beginning step on his journey to becoming a little pianist. Hopefully he’ll be a more diligent piano student than I was as a child ;)
Next Entries »