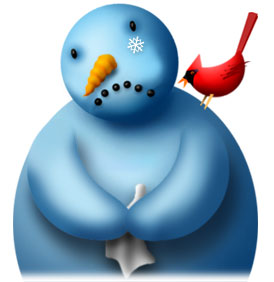 Poor Sydney.  All he wants in life is a new nose, but for now he’s stuck with this old carrot (like so many of his snowman friends).  Cute song idea, right?  But don’t give me any of the credit…that goes to my friend Brian, who suggested this topic on my Facebook page.

When I first started writing this song, I had the intention of letting Sydney find the new nose for which he was searching.  But then it hit me that I had an opportunity for a lesson in self-esteem (though I kept it subtle).  Notice the nods to “Frosty the Snowman” — I just couldn’t resist!

Sydney the snowman had one wish, just one,
And it didn’t have anything to do
With the bright, hot sun.
His wish was for a brand new nose,
Made of anything but carrots,
Which he thought were gross.

Oh, Sydney searched high and low,
He even asked people that he didn’t know,
If they could help fill in the space,
In the middle of his face.

Sydney the snowman liked most things, it’s true.
Candy canes and lollipops
And pretzels and bananas, too.
But the vegetable he did despise,
Unfortunately, was the perfect size.

Oh, Sydney couldn’t think of anything less cute
Than a nose made out of an old orange root,
And then a stranger who was kind,
Gave a compliment that changed his mind.

What a beautiful snowman face have you,
With a nose so bright and button eyes so blue.
I can tell you were made with love,
And that’s something to be proud of.

Big props to Brian for coming up with such a clever song topic! I hope I did it justice. I received quite a few additional ideas as a result of my call for song topics, so I’m trying to decide which to tackle next. Do you have any last-minute holiday song topic suggestions? Let me know in the comments!