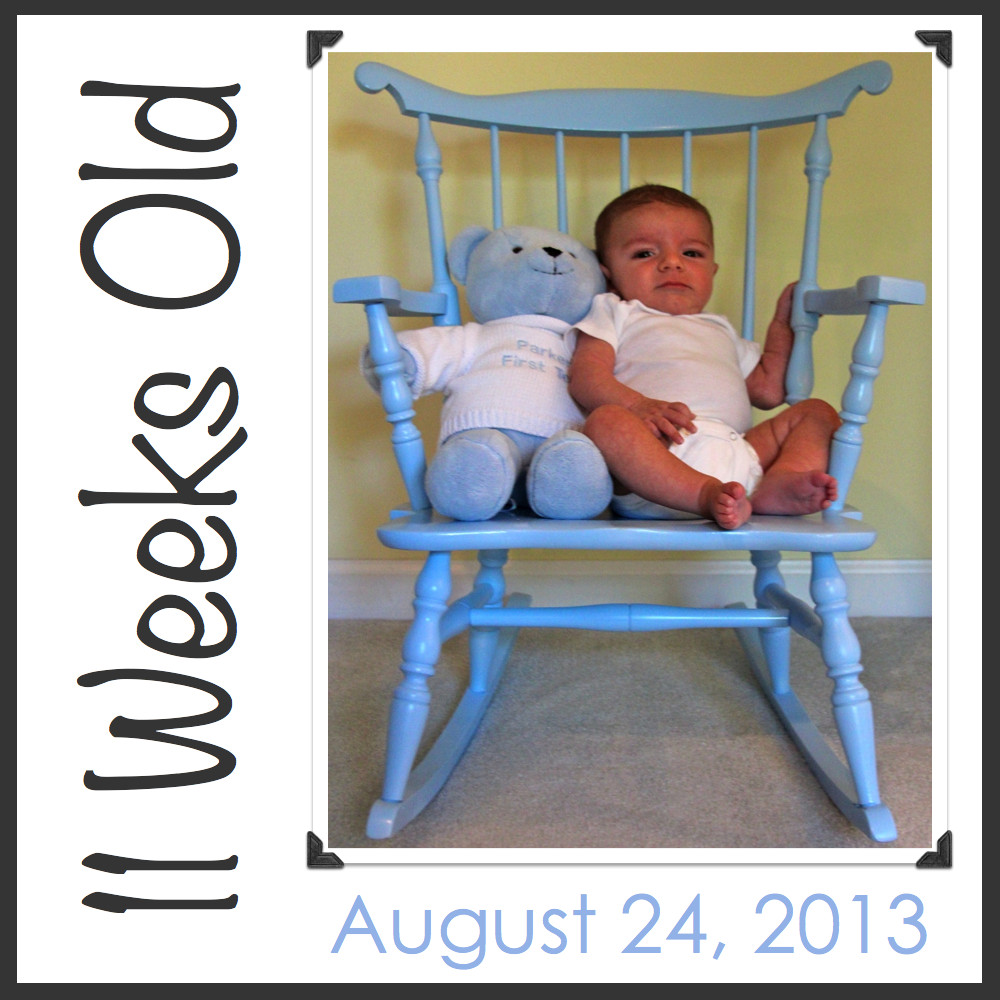 This week brings lots of mixed emotions, because it is my LAST week of maternity leave. On one hand, I am totally excited about seeing all of my students and their families again, but on the other, I am sad that I won’t be with my baby 24/7 anymore. I am going to miss him so much! But then I remember that I get to spend the entire morning and early afternoon with him, and I feel a little better.

Mornings are my favorite, because Parker is almost always in a good mood when he wakes up. I absolutely LOVE unwrapping him from his swaddle and watching his arms go up to stretch, not to mention the adorable smiles he gives me:

The weather was super hot this week, so we didn’t get out of the house too much. We spent a lot of time in Parker’s two favorite spots: the kick ‘n play piano mat and bumbo chair. So much time, in fact, that I made a little video. How cute is this:

I’ve also been putting Parker on his tummy a lot more lately, and he seems to hate it less and less. He’s getting so much better at pushing up and holding up his head, as you can see:

As you can see, I went a little video crazy this week. Of course it would figure that the one time I didn’t have my iPhone in hand, Parker rolled over from his belly to his back for the first time! He had just taken his bath on Friday night, and we had him on a blanket in his nursery. Grandpa Steve was here taking some pictures, and asked Zach to put Parker on his belly for a few shots. As he was checking out the photos on his camera, Zach, Grandma Libby and I watched him roll over all by himself. I couldn’t believe it, but Parker didn’t seem the least bit fazed! So cool that we got to witness this first big milestone.

That was an awesome start to Labor Day weekend. We’re spending the rest of it just hanging out and relaxing before my first big day of work on Tuesday. I get butterflies just thinking about it!

I Said I’d Never Do It 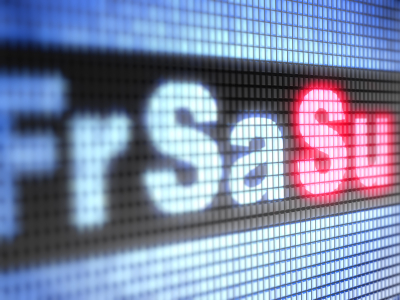 Since I first started my private practice back in 2007, I had a “no weekends” policy. I’ve had families ask about Saturday and Sunday lessons and music therapy sessions, but I always stood firm that I would limit my work week to 5 days. Until now.

The thing is, Sunday has never really served as a day of rest for me. After choir practice and church in the morning, I usually come home and work on a songwriting/recording project or prepare session materials, which works out nicely since my husband is usually busy watching football anyway. And on most Sundays, I head back to church in the late afternoon to teach my early childhood music class. So even though my studio was never open for business on this day in the past, I still was always in work mode.

This summer as I was planning my studio schedule, I realized that something would have to give. With a full load of students and no plans to downsize, plus having to build time in my schedule to pump (one of the very few downsides of being a nursing mom), my choices were to either work well into the night — 8:30 pm on most evenings — or open up a couple hours on Sundays (Saturdays will always be off the table).

The answer was a no-brainer, because a) no family wants to trek out so late in the evening; and b) there’s no way I’m going to miss my baby’s bedtime each night. But I wasn’t sure if there would be any interest in a Sunday session, so I threw it out to all my families in an email. Lo and behold, at least 10 parents immediately responded that they would be very interested. I decided to offer 4 spots on a first-come, first-serve basis, which means I’ll be devoting 2 hours to students every Sunday afternoon.

Some of my friends and family have questioned this decision, but I feel good about it. The way I see it, most working moms don’t have the opportunity to be at home with their children for most of the day on a daily basis, and I do, thanks to an afternoon/evening schedule and no commute. And since I won’t start working until 12:30 on Sundays, I can still go on short weekend trips and be home before my first student arrives.

That being said, I hope I don’t regret my decision once the plan is actually set in motion a week from Sunday. Getting back into the swing of things is going to be an adjustment all around, and though I definitely have some butterflies about the transition, I’m excited. 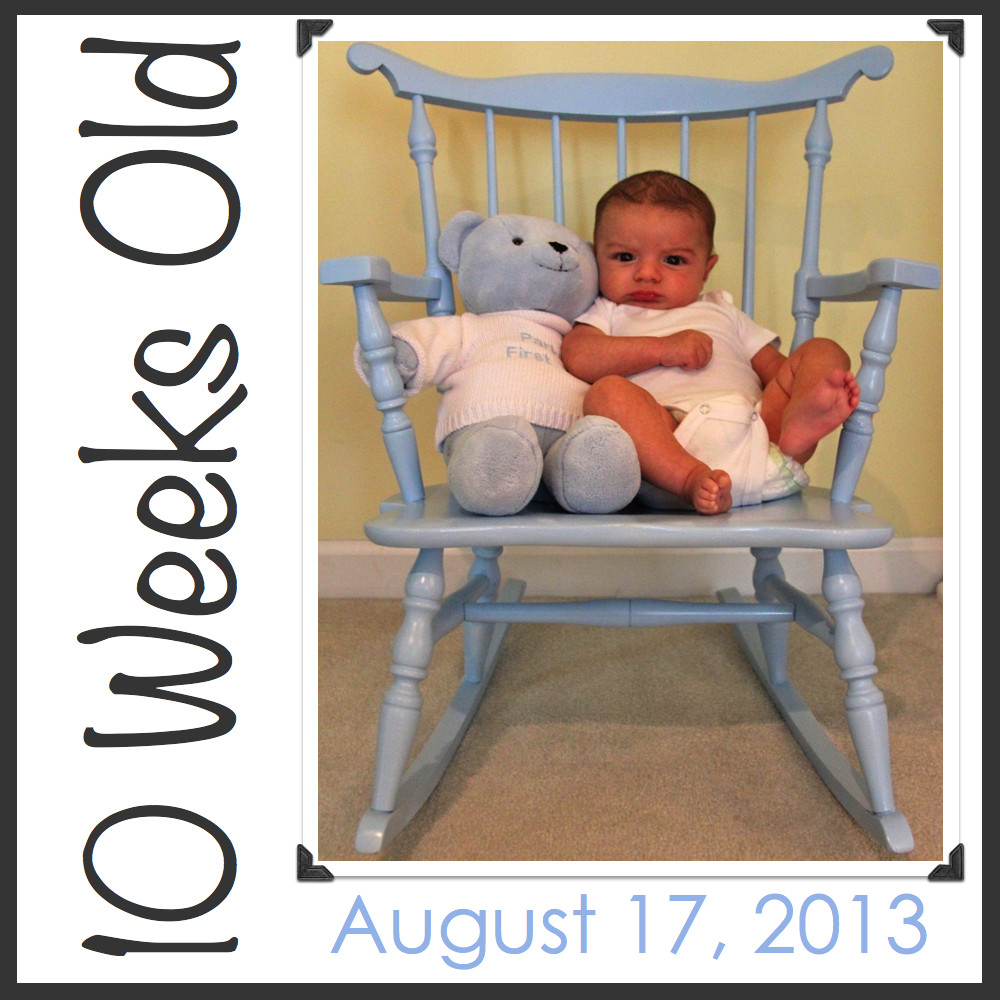 Oh my goodness, we have reached double digits! I have such mixed emotions as the weeks fly by: on one hand, it’s so much fun to watch Parker grow and change, but on the other, I know I am going to miss these tiny baby days so much.

During the first few weeks of Parker’s life, he slept on me all the time. He would fall asleep nursing, and then be perfectly content just lying in my arms for hours. After his last early morning feeding, he would usually sleep on my chest for an hour or so, and words cannot describe the sweetness of having my baby boy right up against me like that. Nowadays, he sleeps so well in his swing and rock ‘n play that he doesn’t spend nearly as much time on me — and I miss it!

But the next best thing is when he falls asleep in either the Moby or Ergo carrier. I put him in the Moby today (using the “hug” hold since his loooong legs are no longer comfortable being froggied up inside the wrap) while I did some chores around the house, and he was asleep in no time. After I finished my chores, I just sat on the couch with him up against me in the wrap and enjoyed those precious moments. 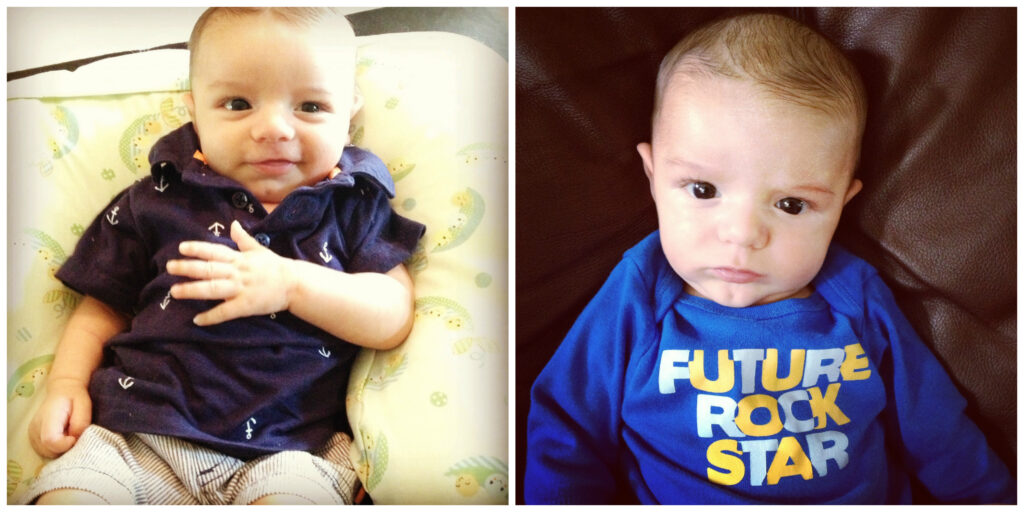 Speaking of precious moments, I have been lucky to capture quite a few on camera this week! On the left, Parker is modeling his new outfit from our friends Sally and Enrique, who we saw in Florida last week. Bonus points that it matches his nautical nursery! And on the right, he makes his career aspirations known ;)

The past few days have been pretty chill around here, after our whirlwind vacation. A bit of a routine is emerging, which I’m hoping will continue in the weeks to come. That will really help when it comes time to return to work (in just a little over a week!). During Parker’s morning nap, I’m able to eat breakfast, pump, do some work on the computer, and tidy up the house so that I can fully enjoy his awake time. We fill that up with story time in his new bumbo seat, making music on the kick ‘n play piano, stroller walks, and tummy time (though this is Parker’s least favorite activity).

One last notable happening in week 10: buckets and buckets of drool! This baby is seriously a faucet all of the sudden…might this be an early sign of teething!? 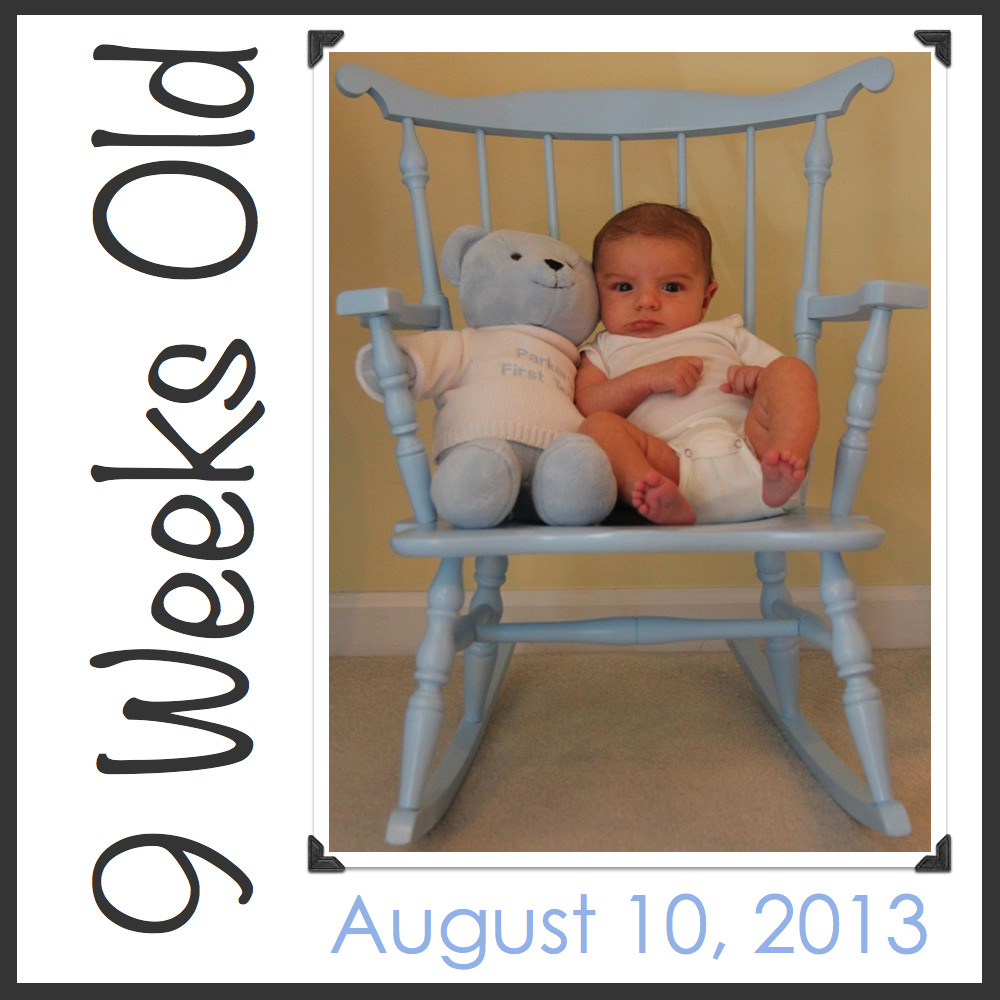 Parker is looking less and less like a newborn and more like a little boy every week :( Where did my tiny little baby go? He crossed the 10-pound mark, but it turns out that he is only in the 7th percentile for weight. He’s still measuring super long at 24.5 inches — that’s 84th percentile! — so we are hoping that his weight catches up with his height soon.

This was a BIG week for Parker: he took his first airplane ride to see his great grandma in Naples, Florida. Everyone’s advice was to nurse him at takeoff and landing so that he’d sleep for most of the flight, and that was exactly what happened! He did have some awake moments on the way there, which we captured in photos. 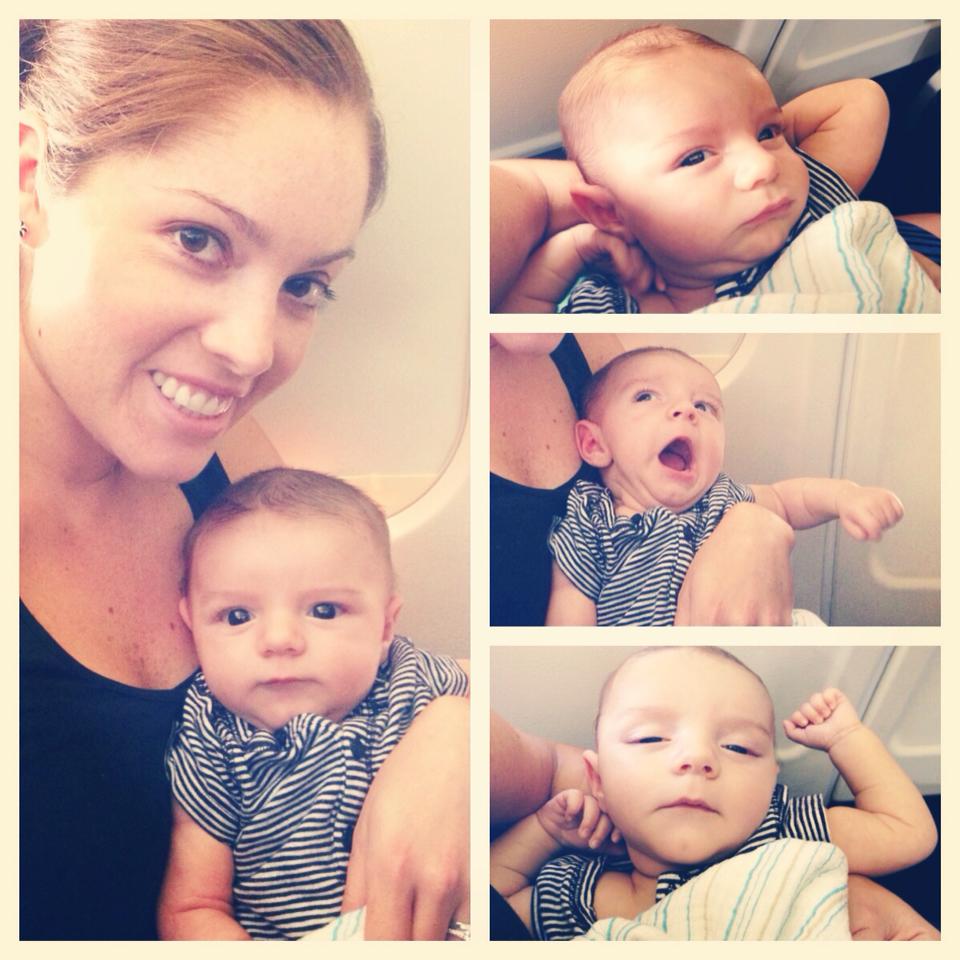 It’s a good thing Parker is such a great traveler, because we do a lot of it. In fact, we are already planning a trip to somewhere warm this winter. Dominican Republic, perhaps? Luckily, Parker also loves the beach and ocean. 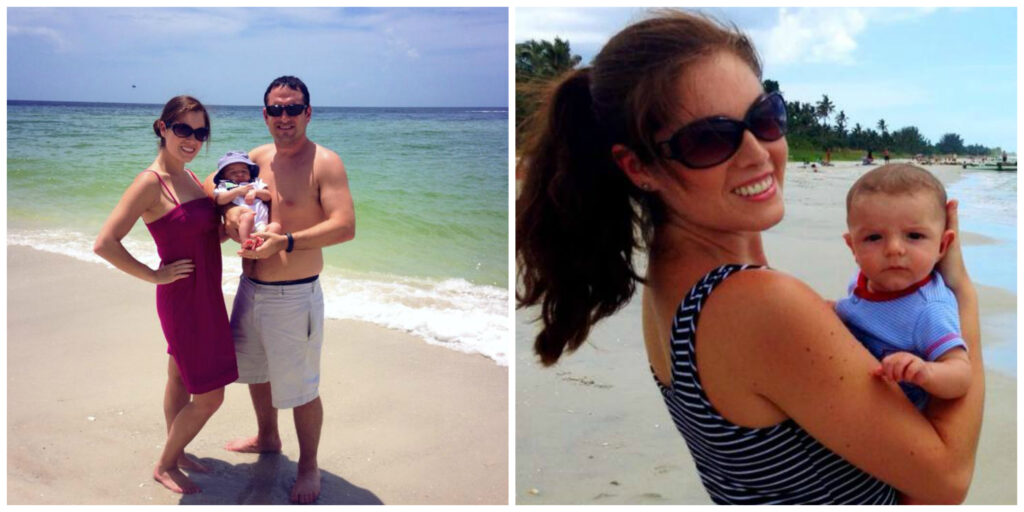 But of course, the highlight of the trip (and the reason for going) was Parker meeting his great grandma — my “Grandma Florida”. We brought along the blanket she made for him, which is one of his very favorite things. 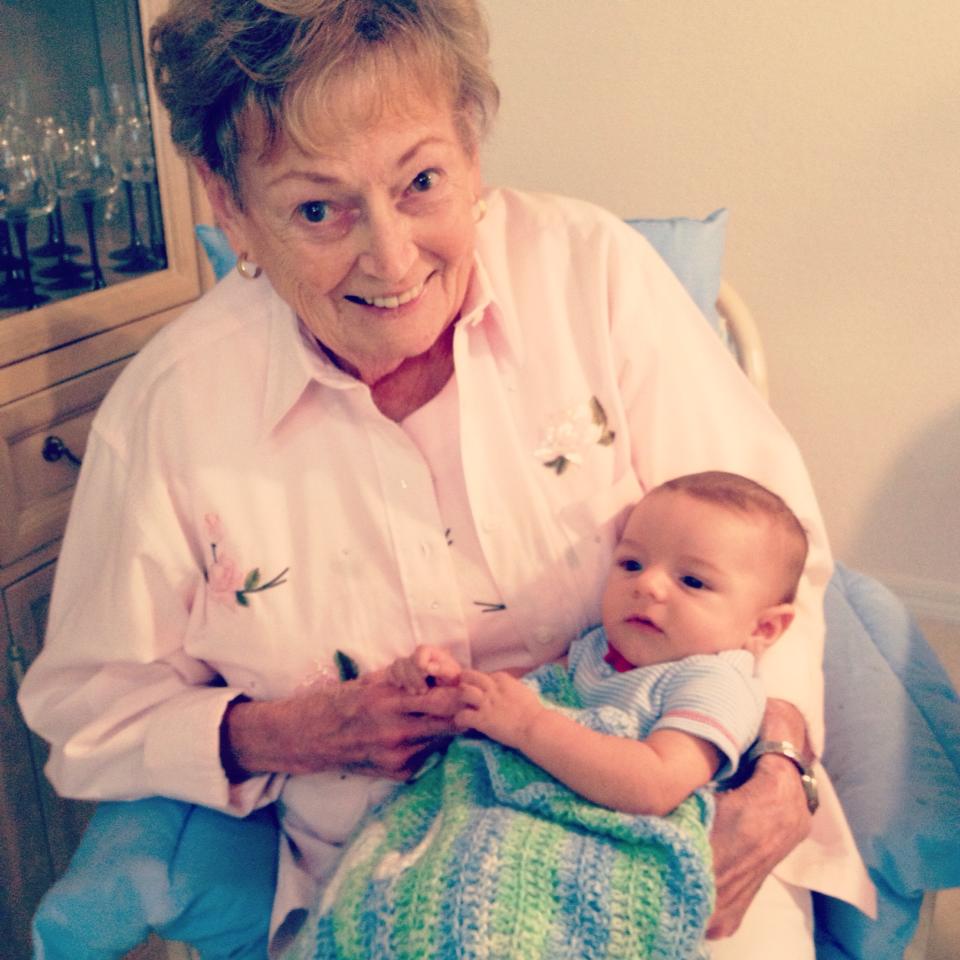 We were only in Naples for a few days, but they were action packed. We went out to eat lots, took two day trips to the beach, visited with our friends Sally & Enrique and their little boy, Ricky, and just enjoyed each other’s company. Oh, and Parker is getting the hang of the pacifier as a result of this trip (we figured it would be a good idea to have one along in case he got fussy in the airport/on the plane/in restaurants).

Now that we’re home, my days of maternity leave are dwindling. I return to work two weeks from today, which is a bittersweet feeling. I will miss the lazy days of summer, hanging out with my baby boy! 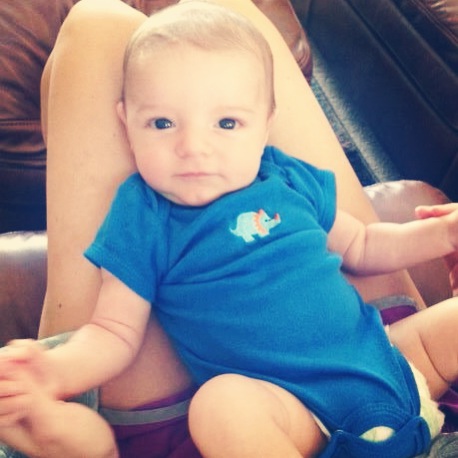 It feels like just yesterday, a whole summer of maternity leave stretched in of me. Parker was born one week after the end of my spring session, so I’ve had an incredible 10 weeks to do very little else than enjoy my sweet baby boy. And now — cue the sad trombone — there are only 2 weeks left.

But before you start to feel too sorry for me, I have to say that when I do go back to work, I have it pretty good. I’ll be home with Parker from the time he wakes up until 3 pm, when I’ll make the “commute” to my home studio (just a few rooms away). While I’m with students, my mom and mother-in-law will take turns coming over to stay with the baby until my husband gets home from work, and then I’ll be finished no later than 8 pm each night.

Even though I get to spend most of the day with Parker, and I don’t have to leave the house to go to work, those 5 hours away from him will still be tough at first. I’m pretty sure all moms feel this way at the end of maternity leave; I’m just glad that I have a job I love and is worth the time apart.

Overall, I’m really excited for September 3rd…but I’m not counting down the days just yet. Tomorrow we head to Florida so that Parker can meet his great-grandma. A few days of family time in the sand and sun is the perfect way to wind down what has been a beautiful summer.