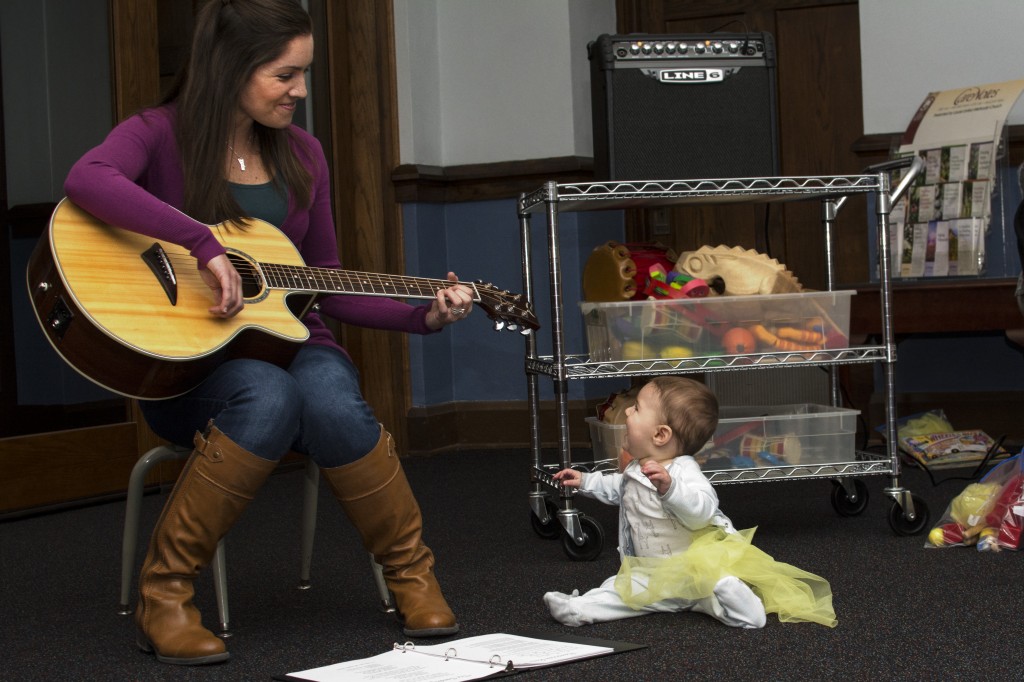 When I took over as Head Mouse of the early childhood music class, Church Mice, I was a music therapy intern in St. Louis and commuting to Springfield on the weekends. I was not married, and I was what seemed like a million years away from thinking about children of my own.

Fast forward 7 years: I’m still the Head Mouse, and there’s a new little mouse in the circle. MY BABY! I cannot fully explain how surreal it is to see Parker sitting amongst the rest of the kiddos, playing instruments and smiling and having fun. 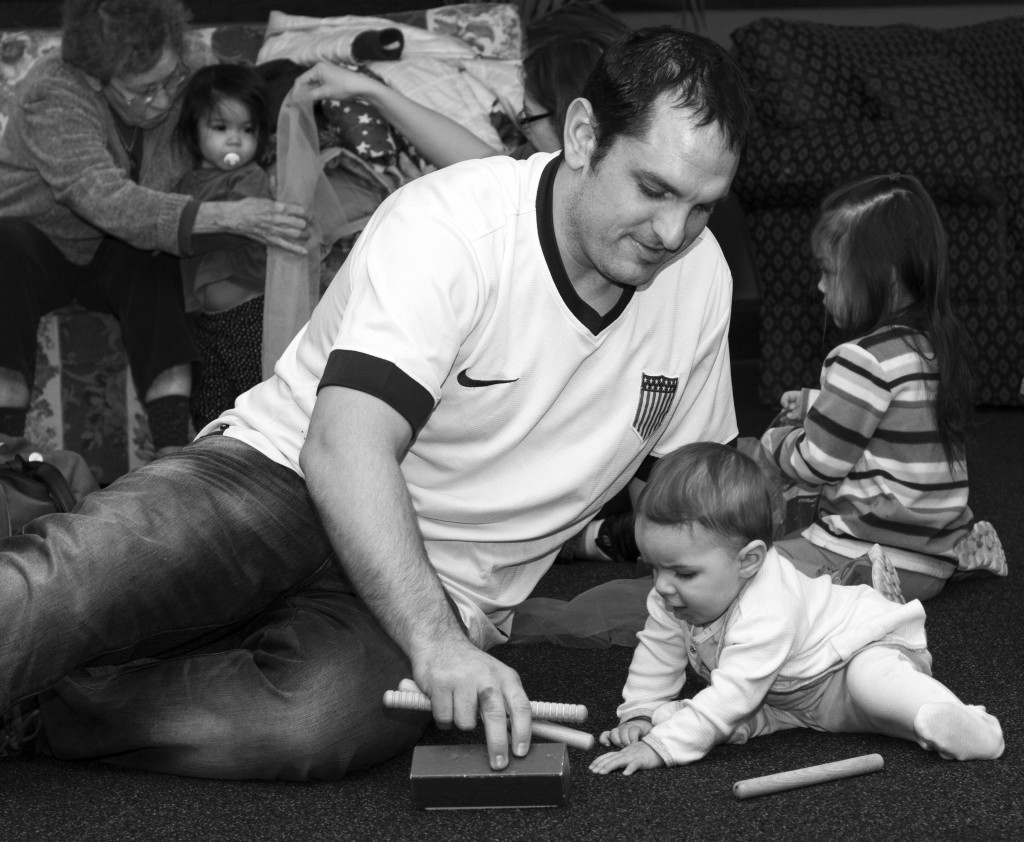 What’s even more surreal is watching Zach (my husband) and Parker play together, just like the rest of the families in the group. When we started thinking about having a baby, and even moreso when I was pregnant, I tried to imagine this scenario — but the reality is so much sweeter than anything I envisioned! The fact that they are bonding through my music just makes my heart swell.

At one point, Zach sat Parker right next to me. He had the biggest grin on his face, watching and listening as I sang. I couldn’t help but grin right back at him. I try not to play favorites in any of my groups or classes, but it’s a little hard not to in this case ;) 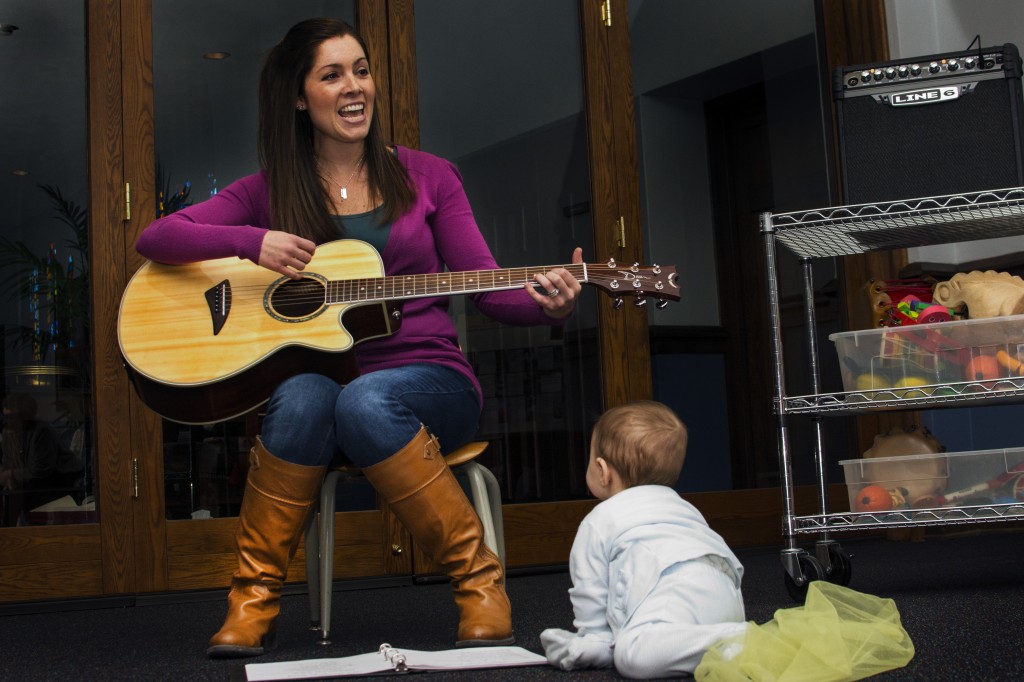 Church Mice has always been one of the highlights of my week, but having my family there brings a whole new level of enjoyment. I know there will come a time (hopefully in the distant, distant future) when Parker is embarrassed by my singing and playing, so until then I am going to soak up these moments, being his musical idol.

This is quite possibly my favorite age yet. Parker is still an infant — he’s little and needy and still nursing often — but he’s also showing some signs of becoming a “big boy”. And as bittersweet as it is to watch my baby grow up before my eyes, it’s also pretty awesome.

He’s so happy; he’s really a sweet, good-natured boy. I can make him smile just by making a silly face or doing a funny dance, and he giggles every time he lays eyes on Sadie. He LOVES his grandparents and his sitter, Greta, and just about everyone else he meets.

At 32 weeks, Parker still wants nothing to do with solid foods. I have tried many different kinds, both homemade and store-bought, and even “puffs” were mostly a no-go. It’s kind of baffling, because he puts everything ELSE in his mouth without a second thought. I’m trying not to get discouraged, but it’s hard when I hear about other babies eating and loving solids. We’ll just keep trying and hope that one of these days, he changes his mind.

Parker has been babbling for quite some time, and right around Christmas he discovered the “ba” sound. Ever since, it’s “bababa” and “bubba” (which happens to be our nickname for him) 24/7, but recently he has added a new word: MAMA. Not “mamamamama”, which has been around for months; just “mama”. He looks so proud when he says it, probably because I clap and cheer and attack him with kisses every time :) He has been playing around with “da”, so “dada” is probably not far behind.

We’ve been going a little stir-crazy inside, and I am so ready for winter to be over. I miss our walks in the park and even just being able to go outside, but it has just been too cold. We spend a LOT of time playing with toys (and the toy bin itself, haha), practicing crawling and walking, and finding other ways to pass the time around the house. Even this homebody is getting bored!

But we do have a couple trips to look forward to in February. We are heading to Florida not once, but twice; the first is for my NICU music therapy training in Orlando, and then the following weekend is Marco Island for Zach’s company trip. It will be so nice to escape the frozen tundra for a few days.

I Want to Remember This

I’ve held a sleeping baby in my arms every day for the last 7.5 months, usually multiple times per day. I’ve taken dozens of pictures like these: of his perfect little lips, his chubby little fingers hanging on to my shirt. Sometimes I try to transfer him to his crib, but other times, I just stay put and let him sleep on me.

Every day, the thought crosses my mind that I’m one day closer to a time when I won’t hold him like this anymore, and that makes me really sad.

I know we have a lot to look forward to as Parker gets older, but I don’t want to forget any of these precious moments. They are far and away the best moments of every day.

The Wheels on the Bus 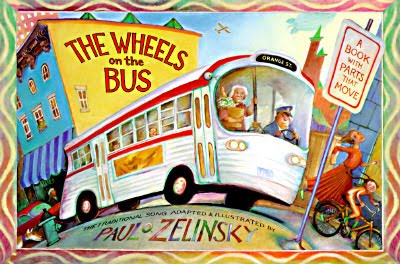 I’m always on the hunt for books I can sing with my students, and my collection of singable stories has grown exponentially since Parker was born. While I love to write my own melodies for books that don’t already have one, I like having plenty of “ready-to-sing” classics on hand.

This month while I was combing Amazon for a few new additions, I came across this super fun version of The Wheels on the Bus — it doesn’t get more classic than that! Each page includes illustrations that come to life when you pull the tabs, which makes the book even more interactive.

I put together a recording of this version, which doesn’t stray too far from the song we all learned back in preschool or earlier. It’s yours to download for free; just enter $0 when asked to name your price :)

I have another singable story to share with you soon thanks to my mom, who picked it up as a Christmas gift for Parker. In the meantime, here are some more of my very favorites for your browsing pleasure. Feel free to share your own must-haves!

My favorite milestone so far: independent play. Parker has demanded my full attention since he was born, and it wasn’t until the last couple of weeks that he has finally been able to entertain himself for longer than just a few minutes.

Since he mastered sitting up on his own — both getting into sitting position and sustaining it — he’s been very content to play with his toys on his own (as long as I’m in sight). I’ve dubbed the far side of our living room “Parker’s Playhouse”, because that’s where we spend a LARGE portion of our day together. Most of the time I’m right down on the floor with him, but now that he is happy to play on his own for a little while, I can use my laptop/eat lunch/fold laundry and still keep an eye on him from just a few feet away.

The key is to have a LOT of toys on hand, because this baby has the attention span of a gnat. I usually dump out two bins full of various toys, teethers and stuffed animals, though it is inevitable that he makes his way off the playmat eventually (he’s a champion roller, scooter and backwards crawler).

I also have a mobile version of the playhouse for when I need to work at my desk for a little bit. Since my office is carpeted, I can spread out Parker’s toys on the floor and plop him in the middle of the room where he’s perfectly content. He especially loves listening to me write songs or record, my little musician in the making :)

Our plan is to finish Parker’s downstairs playroom in time for his 1st birthday, but for now, I love that he has his own space in the room where we spend the most time together as a family.