A Glee-ful Trip Down Memory Lane 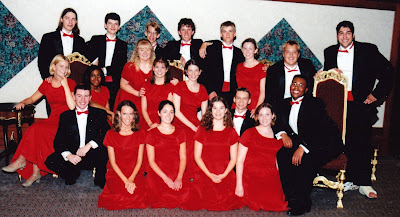 Yesterday’s post about Glee! got me feeling pretty nostalgic about the “good old days” of high school show choir. So nostalgic, in fact, that I went over to my parents’ house and dug out my box of photo albums. I graduated from high school in 2001, the days before digital cameras became the norm, but I did find a few snapshots of my show choir, Seven & Senators, in action. Can you find me in the picture above?  (Hint: click the picture to enlarge it.) 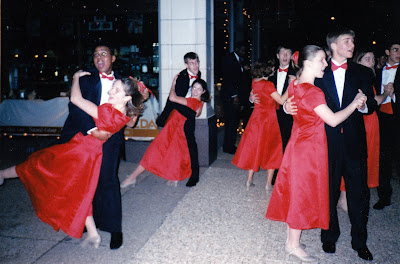 We actually called ourselves a “swing” choir rather than a show choir, because we performed mostly jazz songs.  In this picture, we’re doing “Moonglow” – that’s me in the back, getting dipped by my sophomore year crush.  We never dated, but almost all of my high school boyfriends were musical types.  So it surprised lots of people when I went and married a non-musical soccer player :) 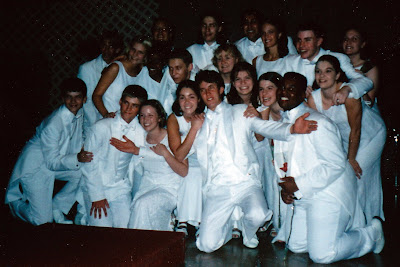 My junior year, our choreographer taught us all how to tap dance.  And by the end of the year, we were GOOD.  At our spring concert, we performed this awesome arrangement of “Bill Bailey” and seriously wowed everyone with our dance skills.  That’s why we all look so happy in this picture! 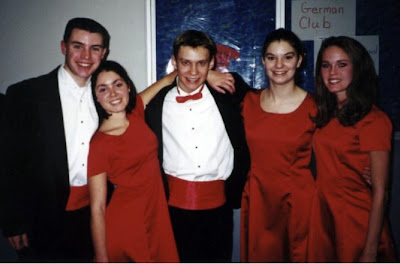 Part of what made being in Seven & Senators so much fun is that I was surrounded by my best friends.  We spent a LOT of time together, so over the years we became very close.  Two of my fellow sopranos were even bridesmaids in my wedding.

There aren’t many life experiences like being a member of a tight-knit performing group.  Of course, we had our share of drama (questionable directors, upperclassmen jealousy when as lowly freshmen, my two friends and I made the group instead of them, arguments over solos and dance partners) but we were quite low-key compared to the hijinks that ensue on Glee.  We might not have made for very good television, but we still had a darn good time!