I am pleased to welcome another special guest to the “Sunday Singalong” series: Michelle Erfurt! Michelle contacted me early Saturday morning, asking if she could share one of her favorite Christmas tunes here at Listen & Learn. And since I’m battling a particularly nasty cold and laryngitis, I was more than happy to oblige.

And what a fun song! I’d never heard it before, so now thanks to Michelle, I have another one to add to my ever-growing list. I’m looking forward to sharing some holiday songs myself in the coming weeks. Now if only my voice would return…then I’ll be all set to crank out a few videos before Christmas day (which, FYI, is exactly 3 weeks from now).

Sunday Singalong: A She & Him Cover

This was a super busy week for me! Between getting back on track after my trip to Atlanta, the holiday, and two big performances, I barely had time to breathe — let alone record a “Sunday Singalong” video :(

But as I was downloading some video from last night’s gig, I had an idea: since I have mentioned the band She & Him several times here on the blog (and turned several readers into fans!), why not post a cover of one of their songs as today’s video? So that is exactly what I’m doing:

Call me lazy, but it’s better than no video at all…right? :) Next week I’ll go all out with more traditional Listen & Learn fare, and that’s a promise!

There are lots of reasons I love attending the national music therapy conference, but today I’m adding a new one to the list: the opportunity to record my first-ever guest edition of Sunday Singalong!

Actually, it’s kind of funny that I had to come all the way to Atlanta to see Meryl Brown, who lives an hour north of me in Bloomington, Illinois. Meryl and I were in the graduate program at Illinois State University at the same time, and have since kept in touch via our state association and social media. She runs a successful private practice, Developing Melodies, and always has excellent professional advice to share with me.

When she told me about her scarecrow song on the first night of conference, I immediately asked her if she would mind sharing it in a video. She agreed, and Andrew Littlefield volunteered his guitar for her use. I must say, us music therapists are excellent team players!

Be sure to check out Meryl’s website and follow her on Twitter. I happen to know that she has many more fun songs like this one up her sleeve, and you never know…she just might be making another guest appearance here in the future.

The other day while singing this song during a music therapy session, I completely blanked out when it came to singing about that 7th little turkey…oops! Isn’t it funny how the brain can fail you like that, even after singing a song year after year? Luckily I remembered that he “hid with the chicks” while recording the video.

When I sing this with my students, I like to pause before the number at the end of each verse and let them fill it in if they can. Another option is to have visual number cards available for pointing and counting down. Either way, “Ten Little Turkeys” is a November staple!

Last night, I attended the National Children Protection Training Center’s inaugural gala in St. Paul Minnesota. Not only did I attend, but I had the opportunity to perform the song my mom and I wrote, because it was chosen as the winner of their national songwriting contest.

Sharing the song with all of the gala attendees was such a fun experience. And each person received a copy of the song on CD (which I didn’t have to burn!) as a souvenir. Here’s a picture of my mom and I at the gala: 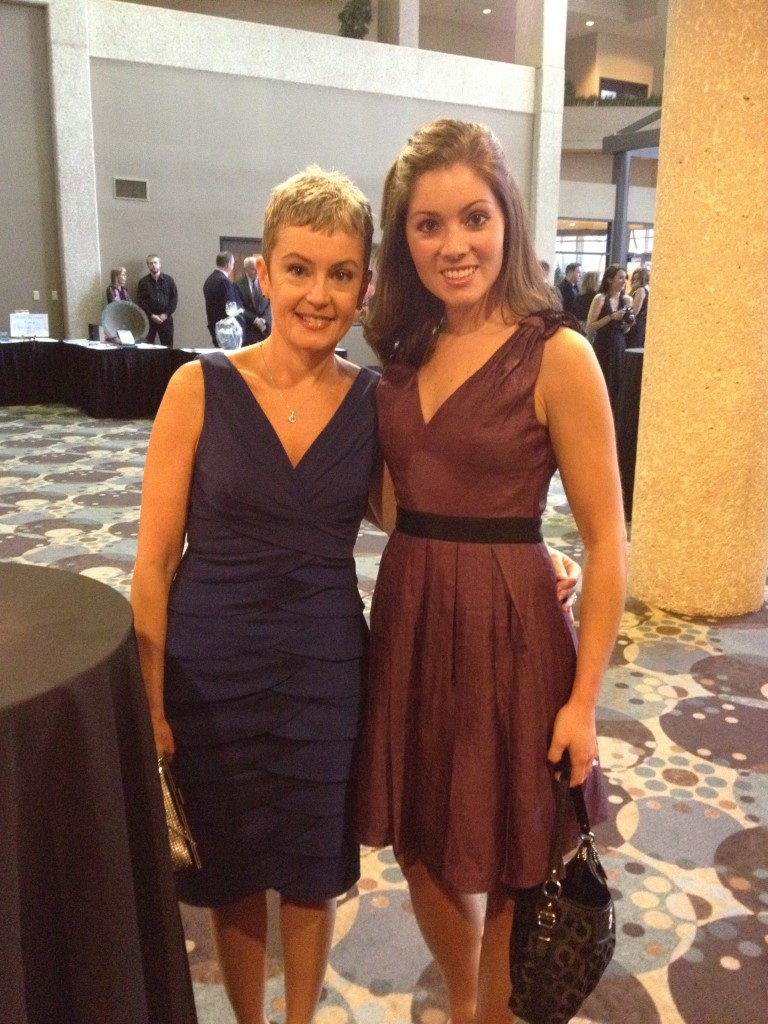 The weekend was great — we did lots (and lots…and lots…) of shopping at the Mall of America and even had some chill time, which I’m not used to at home!

But I’m excited to head back to Illinois later this morning, because I have so much to do in order to prepare for my next trip. I’m heading to Atlanta in a little over a week for the national music therapy conference!