Recognizing, counting, and using money are functional skills that every child is taught at some point in his or her education. I’ve been impressed so many times over the years by the creative methods that teachers use to teach the concept of money, and I can’t tell you how many different songs I’ve heard about the penny, nickel, dime, and quarter.

So I thought to myself, why not add one more to that heaping collection? The song I’m sharing today focuses on recognizing the four main coins, and also their monetary value. I have yet to use this song in a music therapy session as it is fairly new, but hopefully it is effective. “Four Little Coins” goes like this:

A penny is copper in color.
Small, thin and round, you see.
Abraham Lincoln is the face on this coin,
One cent for you and me.

A nickel is silver in color.
Small, fat and round, you see.
Thomas Jefferson is the face on this coin,
Five cents for you and me.

A dime is silver in color.
Small, thin and round, you see.
Franklin D. Roosevelt is the face on this coin,
Ten cents for you and me.

A quarter is silver in color.
Big, thin and round, you see.
George Washington is the face on this coin,
Twenty-five cents for you and me.

There are four little coins in my pocket,
Now you know each one’s name.
What it looks like and how much each one is worth,
Because their values are not the same.

I’ve always found that it works best to use actual coins when teaching money concepts, rather than pictures or fake money. One thing I’ve done in the past is put velcro on the back of each coin, and asked students to match the coin with its correct value, name, or description. I made a book for this purpose during my internship, and still pull it out from time to time. What kinds of activities or songs do you use to teach children about money?

In case you missed it, my goal of raising $2,000 (to create a CD for kids with autism and other disabilities) was met and SURPASSED on Friday, September 4. Not only was that the day Listen & Learn Music officially turned one year old, but it was also the very day I realized that this little dream of mine was going to become a reality!

Since then, I have been hard at work planning my course of action. I found the perfect recording studio back in August, but waited until I knew the funding would be there to actually book it. I am thrilled to officially announce that I will be recording the CD at Jupiter Studios in St. Louis over my spring break, March 30-April 2.

And there’s more exciting news! Kimberly Smoot, an amazingly talented local photographer, has offered to donate her services to the cause. The shoot for cover/insert photos will take place next Saturday, October 3 at her studio here in Springfield. You can check out some of her stunning work HERE.

As I’ve mentioned, this CD (in both physical and download form) will be given away to families of children with autism and other disabilities at no cost. While the money that you all have so graciously pledged will cover recording expenses, there won’t be a whole lot leftover for production costs. So in these final 12 days remaining, I am asking for those of you who have not already pledged to consider doing so. Every extra dollar means another CD can be produced and given away to a child who can enjoy it.

Click here to watch the video, read more, and make a pledge if you are so inclined. Any amount, $1 and up, is greatly appreciated!

Sometimes I feel like there are so many directions I want to go in life, so many things I want to do, that I can barely keep my head on straight. When I graduated from high school, my goal in life was to perform music. I spent my college years working toward that goal, until I realized that I wanted to help people through music. I went to graduate school with the new goal of becoming a music therapist, but I never lost my passion for performance. I just sort of put it aside for awhile.

In the last year or so, though, I’ve had the itch to get back into it. That is not to say my passion for music therapy has diminished; in fact, quite the opposite is true. Lately I’ve been feeling more and more like I can do both, and though it can be overwhelming at times, I have found inspiration in so many places to keep at it. These are just a few sources of that inspiration:

Other music therapists who are in similar situations. Last spring, I had a long conversation with a music therapist across the country who struggles with finding a balance between her music therapist-self and her performing-self. I completely identified with her, and was reassured to hear her say that it is okay to embrace both passions.

The internet. I come across websites every day that tell stories of other performers with unconventional backgrounds, career paths, and day jobs. I am constantly reminded that people don’t fit neatly into boxes labeled “singer/songwriter”, “music therapist”, “teacher”, etc. There is a lot of overlap between all the branches of the music world.

Laurie Berker. Okay, so I talk about her all the time, but I can’t help it. Like me, she began her career using music to connect with and help children. She started writing her own songs, and with a lot of hard work, made a name for herself through her music and now reaches children all over the world. I read a great interview with her yesterday which made me look up to her even more.

Allison Weiss. This girl knows what she wants to do, and is going after it. She makes use of all of her resources, and is, as she calls herself, a totally DIY artist. In fact, I first learned about Kickstarter through her website. She raised $7,000 to make her album, and although she doesn’t work with children, she connects with people through her music in a way that any music therapist or musician in general can appreciate.

My own audience. When I am doing music therapy, I don’t think of my students as my audience. Music is merely the tool that I use to work with them on goals that are actually non-musical. But when I hear a student (or staff member!) singing one of my songs outside of the music therapy session, it makes me feel like my music is not only therapeutic, but also enjoyable. Sort of the same feeling I get when I am performing in a non-music therapy setting and people are responding to my songs.

I hope this all makes sense, not just inside my head, but to you as well. The bottom line is that I never want to stop being a music therapist, nor do I want to stop performing. The universe seems to be telling me that it is okay to do both, so I am just going to keep listening :)

If you are a music therapist, educator, or parent and HAVEN’T heard of or visited Songs For Teaching, then you have been missing out on one of the best resources for educational children’s songs and materials on the web. I discovered this amazingly comprehensive website less than a week into graduate school, as I was planning music therapy sessions for an assignment. I knew the minute I entered the site that it was a goldmine – there are thousands of songs by hundreds of artists to choose from, not to mention lyrics, lesson ideas, printables and freebies.

Last year I had the opportunity to offer my own Listen & Learn music at Songs For Teaching, and at this point there are 13 albums available for download. So I was absolutely thrilled when Songs For Teaching invited me to write for their brand new blog, which just recently went live. You can find it HERE, and there is also a link to it from the main page.

I will be blogging about many of the same topics you read here at Listen & Learn, though I go a little bit more into depth there about strategies for using music in the classroom. The goal is to spread the message that music is an extremely useful educational tool, and not only that, but it’s fun. Please take the time to visit and let me know what you think! 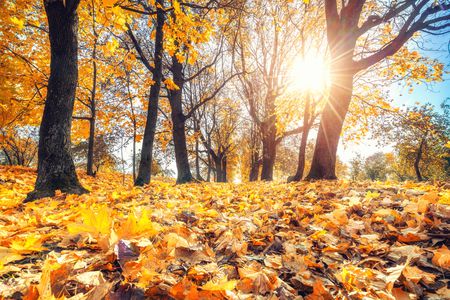 It is officially fall! Preparations are being made at The Hope Institute for this weekend’s Fall Festival, which include homemade scarecrows from each classroom (for a song about scarecrows, click here) and decorated leaves.

Though “Fall Into Fall” has been our official song of the season since last year, I wanted to add another one to the rotation. “All About Autumn” includes the major events in the coming months, and although I could have easily added several more verses, I decided that three was enough :) Take a listen:

I want to tell you all about autumn,
That’s another name for fall.
It begins at the end of September,
When the days are short and the trees are tall.

Autumn is a time to change the clocks,
We fall an hour behind.
We get an extra hour to sleep at night,
‘Cause that’s what happens when we rewind.

Autumn is a time for Halloween,
Wearing costumes while we trick-or-treat.
Walking around our neighborhood,
Collecting so much candy to eat.

Autumn is a time for Thanksgiving,
Let’s be thankful for the food on our plate.
And all of the good things in our lives,
With our family, we celebrate.

One of the things I’m looking forward to this autumn is the end of daylight savings. While I know most people would like the sun to stay up longer, I’m eager for it to rise earlier! I wake up at 4:30 am during the week in order to hit the gym, and it is always so much easier to get going when it’s lighter outside. What are you looking forward to in the next few months?