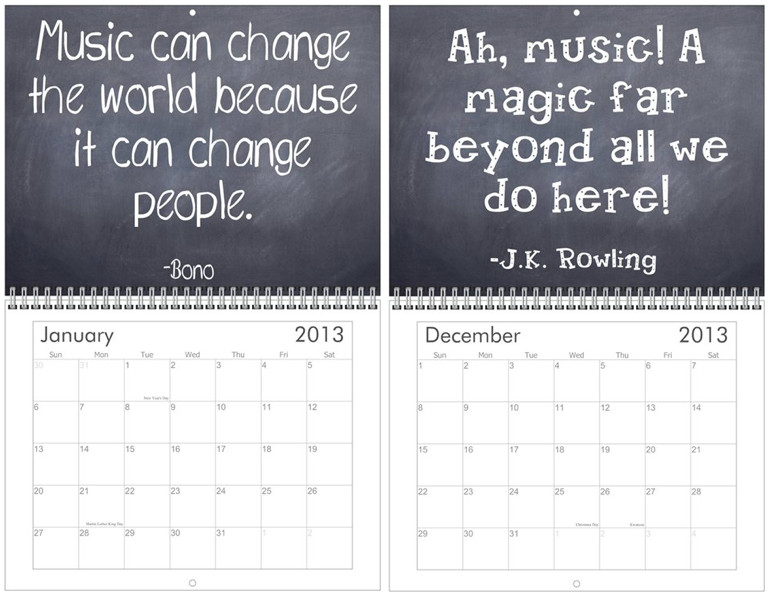 Hands down, 2013 has been the best year of my life thus far. The first half was spent anticipating the birth of my first child; the second half has centered around watching my baby boy grow and develop right before my eyes.

Needless to say, when it came to my work I was a little…distracted. Don’t get me wrong: I still put 100% into each music therapy session and lesson, but the extras — songwriting, recording, my online biz, THIS BLOG — took a backseat. For the first time in 6 years, my career was no longer my baby. I guess that’s what happens when you have an actual baby.

That being said, I did manage a few professional accomplishments over the past twelve months that I think are worth noting, if only for my own peace of mind. This list will come in handy on days where I feel like my only accomplishments involve diapers, board books, and an assortment of Fisher-Price toys :)

In January, I participated in Social Media Advocacy Month by writing an adapted version of The Lumineers’ song “Ho Hey” for my clients. I also celebrated my 6th year teaching Church Mice, the early childhood music class at my church (a “job” I will probably do until I’m old and gray, I love it so much).

In February, many of my students participated in Junior Festival and ALL of them received superior scores. Several received their first gold cups, and I couldn’t have been any prouder. That month also saw the launch of Listen & Learn for Little Ones, my new class for kiddos ages 0-3.

In March, my CMTE course — The DIY Guide to Writing, Recording, and Sharing Your Music — went live at MusicTherapyEd.com. This was a huge cause for celebration, because I spent countless hours back in the fall writing and recording the course videos (while simultaneously dealing with horrible morning sickness).

In April, I presented a workshop for my local Illinois Federation of Music Clubs titled Music is for Everyone: Teaching Children with Special Needs. I was super nervous about presenting in front of a room full of fellow music teachers, but it went well and I felt like a (very pregnant) rock star afterwards. Later than month I released a new digital songbook, Tapping, Shaking, Music Making!

In May, with only a few weeks to go before my due date, I started winding down professionally and getting ready for the baby. I made it to my last day of the spring session on May 31, and then enjoyed a few days of rest and relaxation before going into labor just a week later.

In June, I gave birth to my son 3 days after turning 30. As you can imagine, I was just a little busy with Parker and didn’t do much in the way of work all month!

In July, I was still on maternity leave but thrilled to feature guest posts from several awesome music therapy bloggers. Michelle, Kimberly and I held our annual Music Therapy Round Table “meeting of the minds” via Google Hangout, since traveling was out of the question this summer.

In August, I made the big decision to work on Sundays in order to have more time in the evenings with my family. And then I got busy planning my fall schedule, since my maternity leave was up at the end of the month.

In September, I returned to work and realized just how hard it is to have two full-time jobs (stay-at-home mom to an infant during the day, music therapist & teacher in the afternoon/evening) with very little sleep. But somehow I survived that first month back, and it only got easier from that point on.

In October, I had the opportunity to use fellow music therapist Lisa Barnett’s My House Interactive Songbook and blog about it here. I also wrapped up the fall session (which is always my favorite because I get to see how much all the kiddos have grown over the summer) of Church Mice.

In November, I started a new series here on the blog called {Mama Moments} where I get to talk about my favorite topic of all time ;) It was also #AMTA13 conference time, so I made the trek to Jacksonville, FL (with my family in tow) to present and network with lots of awesome music therapists.

In December, I wrote a whopping ONE blog post in all that spare time when I wasn’t a) seeing students; b) undergoing a major house renovation; c) taking care of my baby; d) getting ready for Christmas; d) all of the above. This month flew by in a flash, which seems to have been the story of 2013.

And now here we are, days away from 2014. I have no idea what the next 12 months will hold, nor am I announcing any huge goals as I have in years past. (Blogging every day? Nailed it in 2011. New song every week? Got the job done in 2012. Grow a human being? Delivered on that one in 2013.) But I do have some hopes and plans for the new year, starting with a brand new song for 2014 right here later in the week.

Thank you for reading, offering feedback, supporting my work with your purchases, and just generally being wonderful. Now let’s all go enjoy the last days of this year.

We had an awesome Christmas. When we weren’t taking ridiculous photos of Parker in various holiday attire, we were spending quality time with our families — eating, opening presents, and of course, playing with all of the fun new toys.

Our house feels so much homier now with the new floors, and that was amplified by all the Christmas decorations. I’ll be so sad when it’s time to take everything down.

Parker is still too young to really know what was going on, but he gave us plenty of smiles and humored us by ripping the wrapping paper off a few gifts (and promptly putting it in his mouth). He spent most of Christmas morning napping in Grandma Libby’s arms, but he rallied for round two with my family later on in the day.

We were all very spoiled this Christmas with tons of great gifts from our family and friends. But I won’t lie: I’m the most excited about everything that Parker received! Since I spend most days playing with him, it will be nice to have lots of new toys to add to the rotation.

There’s nothing quite like baby’s first Christmas, and we have so many wonderful memories from this past week. Next year will be a completely different experience with a mobile toddler!

On Being a Mom

Sometimes the fact that I’m a parent sneaks up on me. I had one of those moments tonight, actually: Zach has been playing in a soccer tournament all evening, so I had a few hours to hang out by myself after Parker went to bed. I watched a movie in our bedroom and caught up on some blogs on the computer, which is how I spent many evenings before the baby was born. (Nowadays most post-bedtime hours are spent catching up on laundry and doing the work I didn’t have time to complete during the day.)

When I came out of the bedroom to refill my water bottle, the pile of toys in the living room caught my eye. It took me by surprise at first — maybe because those particular toys are new and I’m not used to seeing them. But this wave of holy crap, I have a kid washed over me, just like it had on Christmas Eve as I was wrapping gifts and wrote “Love, Mommy & Daddy” on Parker’s gift tags.

I’ve experienced the same feeling at the grocery store, when I’m loading my stuff onto the conveyer belt and pick up a pack of wipes from my cart. And when I’m talking to a student’s mom, who asks how the baby is doing. The list goes on…which is surprising considering I’ve had almost seven months to get used to this role. After all, it consumes most of my waking (and “should be sleeping”) hours.

I always thought that once I became a mom, I would all of the sudden feel more grown up or have life all figured out. But in all honesty, that hasn’t happened; in fact, the opposite is true. Now that I have a baby, I question all of my decisions and wonder if I’m doing the right thing for him and our family.

But maybe that’s normal. Just like Parker is figuring out the world as a new human, I’m doing the same as a new mom. Everything is different with a child, whether he is physically with me or not, and sometimes my brain has to process that (again and again).

Another sneaky parenting moment I experience often? When I’m hit with the fact that holy crap, this beautiful creature is all mine and I get to keep him. I really like when that happens.

A Child is Born

Parker made his acting debut on Christmas Eve, and he did such a great job that he was featured on the front page of the newspaper on Christmas Day. Go figure that it took Zach and I thirty years to make the front page, but only six months for our little thespian.

We played Joseph, Mary and Baby Jesus in the nativity skit at Laurel United Methodist Church. We didn’t have any lines or real responsibilities other than walking up the aisle and standing at the front of the church with the various animals, wisemen, and angels (played by children from the congregation).

Parker didn’t make so much as a peep during the entire service; he was way too busy looking around at everything and everyone…while wearing nothing but a diaper and swaddle cloth. I know I’m biased, but I think he made the perfect Baby Jesus. Needless to say, his first Christmas Eve is one we won’t forget!