Last weekend, I had the pleasure of leading the music portion of my church’s “Breakfast With Santa” event. This was the second year of my involvement, so I knew better what to expect and what the kids wanted (the chance to get up, dance around, and sing Christmas songs) as well as their parents (happy, occupied children and cute photo ops). I managed to combine all of these things in a ten-minute activity, and it was so much fun that I thought it deserving of “Friday Fave” attention!

Reindeer were the theme of the music room, made evident by the reindeer antlers on my head. Once all the children arrived, were seated, and commented on my headgear, I asked them if they knew who was the most famous reindeer of all. Of course, they all shouted, “Rudolph!” and we went right into the song, Rudolph the Red-Nosed Reindeer.

Next I asked if they were aware that Rudolph isn’t Santa’s only reindeer, and told them that I would need 8 volunteers to show them what I meant. This worked out perfectly, because the groups were made up of 10-15 kids, and there were always a few who just wanted to watch. My volunteers came to the front and reached into my bag of tricks: 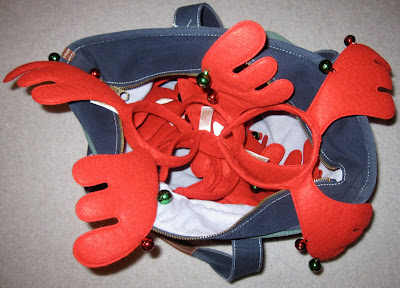 After all, every reindeer needs a good pair of antlers (the jinglier, the better) and a substitution for hooves (rhythm sticks, of course). I knew the props would be a hit, but I wasn’t quite ready for the excitement they would stir up. And that was fine with me! 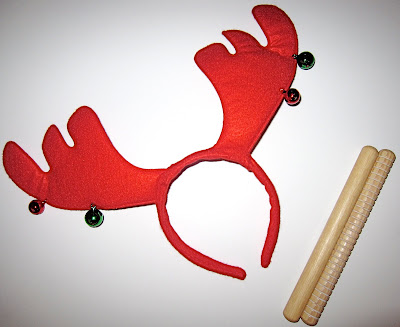 The finishing touches were the nametags, which my “reindeer” wore around their necks. I made these by printing the names in a Christmasy font, laminating, and hole-punching so that I could string the sparkly rope through and tie it at the top. 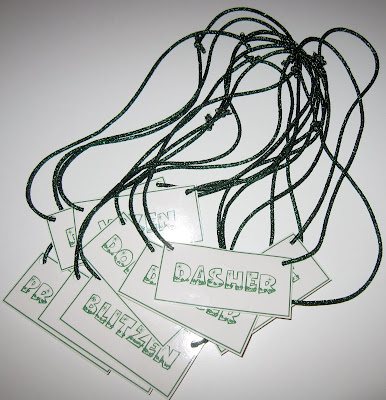 Not all of the kids could read, so before the song, I pointed to each “reindeer” and read his/her name aloud. Then I told them to listen carefully, because when their name was called during the song, I wanted them to fly away just as the lyrics instruct.

The song that I used for this activity is one of my own, The Other Eight Reindeer. Both the kids and parents got a real kick out of it, and you should have seen those cameras flashing as each child “flew away” when it was his/her turn.

After the song, I asked the children to return to their seats for the next song, Up on the Housetop. They all clicked their “hooves” and sang along, still wearing their antlers (I’m telling you, it was a chore getting them off their heads and back into my bag). At the end of the song, it was time for the group to move on to the next station. I repeated this activity eight times that morning, and had a nice long nap when I got home :)