Inside the Recording Studio: Day 3 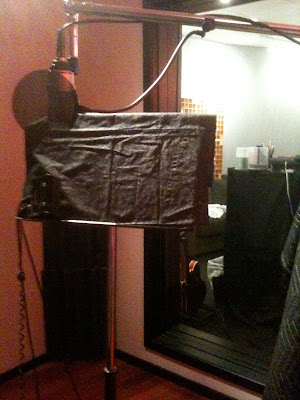 As I write this recap, I’m getting ready for my final day in the studio.  I’ve spent over 30 hours here, and I’m going to miss this place when I’m finished!  Yesterday was a big day, so I’ll get right to it.

To be honest, I was a little bummed to be missing out on such a gorgeous day outside.  Here in St. Louis, the sun was shining and the temperature was 75 degrees (unusual for the end of March).  But as soon as we got to work, I completely forgot about the weather and turned my focus to the music.

We started with song 7, using the same process we’d gone through for the previous songs.  Jim (my sound engineer) laid down the drums, then keyboards, then bass and electric guitar, and then it was time for me to play my acoustic guitar part.  We did two takes, and when that was finished I moved to the vocal booth.  First, I sang the lead melody twice through.  My voice was still fresh since it was early in the day, so we got good takes right away.  Then I sang the harmonies three times through.  That was it for song 7!

While I was in the vocal booth, we went ahead and recorded the vocals for song 6 (which we had tried to do the night before, but it was 10 pm and my singing reflected that fact).  This went quickly, and it was time to listen to songs 6 and 7.  I was thrilled with both of them and couldn’t wait to send preview tracks to my mom, dad, and husband.  They have been my sounding board throughout this process, providing feedback on each track as they are completed.  The rest of you will have to wait, though :)

Song 8 is my new favorite (though so far, I’ve said that about every song).  Jim started playing the keyboard as he listed to the scratch track, and I instantly knew we were dealing with greatness.  He had some pretty complicated work to do on this one, so I spent some time on the internet until he was ready for me to play my acoustic guitar part.  After I did that, I went into the vocal booth to record the melody.  Instead of a traditional harmony line, I did some scatting to match the instrumentation and the result was pretty, pretty cool.

We got to work on Song 9 just after 10 pm, as my energy started to dwindle.  Jim got through the keyboards, bass, and electric guitar, and I somehow managed to make my fingers form chords and strum well enough to lay down the acoustic guitar.  He suggested I do vocals, but after one take, we laughed at my poor exhausted voice and decided to call it a night.

At that point, it was 11:30 pm and another engineer arrived to do some overnight tweaking on my vocals. I got to listen to each of the songs as Jim showed him what he would be working with, which was really fun.

Coming tomorrow: a recap of my 4th and final day in the studio.  Thanks so much for following along with me on this exciting journey!