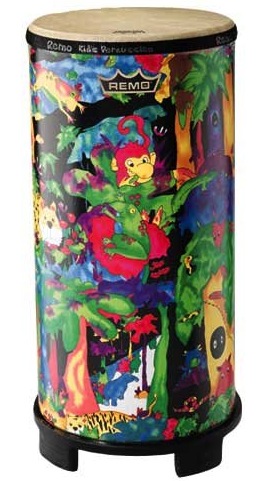 This drum has been a fixture in my studio for a couple of years now, but lately I’ve been incorporating it into music therapy sessions more than ever.

Here are the three things that I like best about this tubano drum by Remo:

Added bonus: the drum makes a perfect mini side table when not in use. I keep it next to my piano, and my caddy for pens/pencils/antibacterial gel/other small items sits on top.

I’ll have to write another post about the specific songs, activities, and interventions I’ve come up with just for the tubano drum. And as always, feel free to share your own uses for it!

I may be turning 28 next month, but I’m still allowed to make a wish list for my birthday!  With my new studio transformation in progress, most of the things I’m asking for relate directly to my work — though that is almost always the case.  (Last Christmas, my parents insisted that I put at least one thing on my list that didn’t concern music or technology.)

So here are the top 3 items on my loooong list of wants.  Let’s just say I would be more than pleasantly surprised if I receive them on June 5. 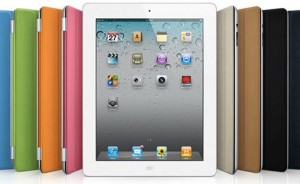 iPad 2: I’ve actually gone back and forth on this one.  As awesome as the iPad is, I just don’t know if I really need it.  For one, my husband has one and gives me free reign over his whenever I want.  Also, I already have an iPhone.  But the more I read about the iPad and explore the apps that are available, the more convinced I become that it would be a useful tool in my studio. 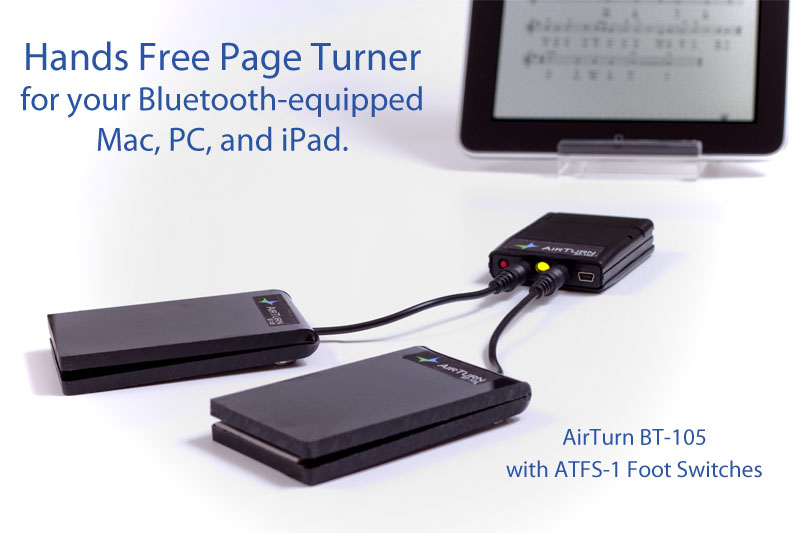 Airturn Page Turner: This is one of reasons I want the iPad.  The idea of my students and I being able to play using sheet music displayed on the iPad or Mac (of course, I would also need this) and use a foot pedal to turn the pages is just awesome. 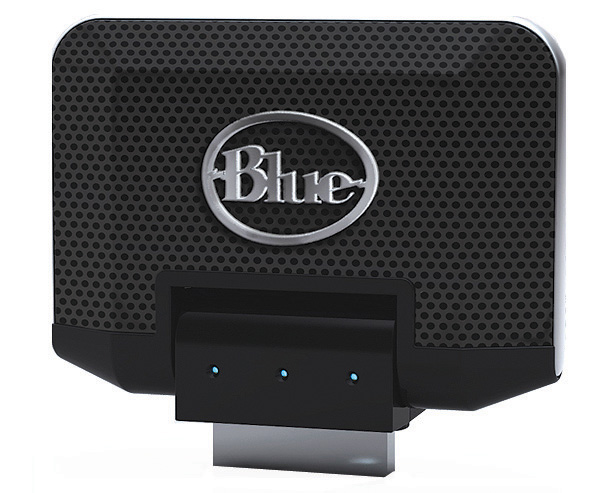 Blue Mikey: A microphone for my iPhone.  I am a huge fan of Blue Microphones and have been using the Snowball for years.  But sometimes during a lesson or music therapy session, I don’t necessarily want to set up my computer and microphone.  I’d love to be able to just plug this bad boy into my iPhone and start recording.  I do this every once in a while with the voice memo app, but it would be nice to get a more high quality sound.

What music & technology related items are on your wish list?

Have Cart, Will Travel 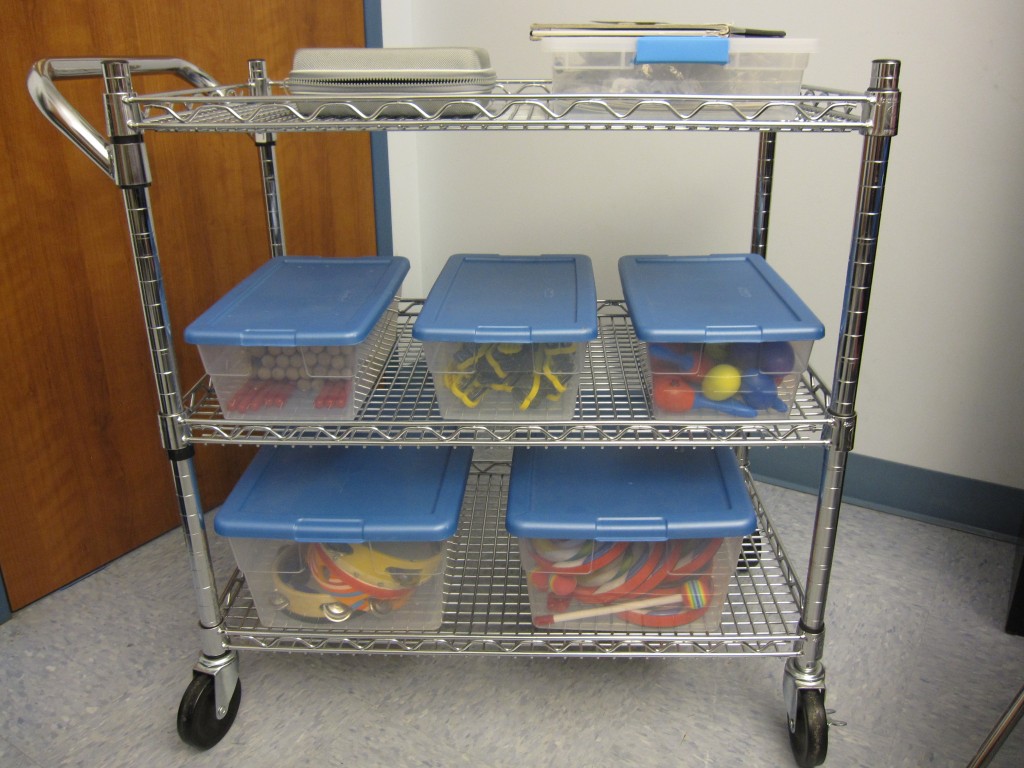 I have to admit: pulling a cart from classroom to classroom took some getting used to at first.  Four years later, though, my trusty cart is like an extension of myself.  That and my guitar, of course.

I know very well that I’m not the first music therapist or teacher to travel with a cart.  The speech therapists and art specialist at my school do the same, and it works extremely well for our students.  They get to stay in their classroom or activity room, where they feel the most comfortable, and we take only the materials we’ll need on that particular day.

That being said, I wish I had a third eye to keep on my cart during particular music therapy sessions.  It can be a little too tempting for several of my students at times, especially when there are favorite instruments or equipment on it.  Some teachers keep a sheet over their carts while working with students, which is not a bad idea at all.

So what do I put on my cart?  Well, the instruments change from week to week, as do any visual aides or props that accompany my activities and interventions.  Every so often, I’ll bring along my iPod and speaker, which I use as positive reinforcement for a few classes.  My visual schedule and guitar stand are cart staples, since I use them every day in every classroom.

Pretty soon, I’ll be passing my cart down to my intern, who will be taking my place when she graduates and I go full-time with my private practice.  It has served me well over the years, though I’m not sure how much I’ll miss the fun of squeezing it in and out of my office several times a day!

Do you travel by cart, too?

Two years ago, my “home recording studio” consisted of two things: a 13″ Macbook and a $12 Logitech microphone.  Though it wasn’t fancy, it did the job, considering I was simply recording music therapy songs for the students at my school.  But the more songs I wrote and the more interested I became in home recording, the more sophisticated my setup became.

Now that I sell my self-recorded music (in addition, of course, to my studio album) both in my own store and on larger platforms like Songs For Teaching, I have a much higher standard of quality.  That comes with a need for higher-quality equipment, which is the topic of today’s post.  The picture above gives you an overview of my home studio, but I’m going to break it down for you even further.  Let’s go!

The #1 most important component in my setup is my computer.  My 15″ Macbook Pro powers the software I use, which is Garageband.  This program is included with the price of the computer, and for entry-level software, it is really quite powerful.  Although I’m sure there are great recording programs for PC, I am most decidedly a “Mac person” and simply love the intuitive interface, ease of use, and integration of Garageband with iTunes.

Pictured on the right is my M-Audio USB MobilePre Preamp, which I use to record my acoustic-electric guitar and monitor my sound input.  I wrote a detailed post about the preamp earlier this year.  The Sennheiser headphones

I use are awesome; they cover my ears completely, are crystal-clear, and have a long coiled cord that reaches from one end of my studio to the other.

was a birthday gift from my husband, and for someone who spends so much time in front of the computer, it has truly been a game-changer.  The wide screen view is especially useful for Garageband; when I’m tracking instruments and vocals, it’s nice to be able to see big chunks of audio at a time.  The monitor is connected to my computer with an HDMI cable and adapter.

Next is my M-Audio midi keyboard, which I use to record keyboard and other instrument sounds.  It connects via a USB cable, so basically, all I have to do is plug in (Garageband immediately recognizes the MIDI input) and then I’m ready to play.  I have a super duper deluxe model

at school, which has so many features I haven’t even learned half of them yet.  That will be a project in itself when school starts!

.  I get lots and lots of emails from people wanting to know what I use to record my vocals, and I delight in telling them that it’s a simple USB mic that costs less than $100.  I have a ringer shockmount

attached as well as a pop filter

My speakers are relatively new, and I’m head over heels about them.  These Logitech Omnidirectional USB Speakers

are inexpensive, loud, and high-quality.  They also look really nice!  Although I listen to all of my recordings through headphones, I also want to make sure they sound good through speakers, since that is how most other people will be listening to the songs.

If you’ve been keeping track, you’ve noticed that 4 of the pieces of equipment I’ve covered connect via a USB port.  Any Mac user knows that the computer only offers 2 USB ports, which is why I use a Rocketfish USB Hub to power my entire studio without plugging and unplugging anything.  It only takes up one USB port on my computer, and the best part is that it has a suction cup, so I can attach it to the backside of my desk in order to hide the spaghetti factory of wires and cords.

Two last pieces of equipment to mention, and then I promise I’ll end this insanely long post :)  These are crucial if you use an external monitor: the Apple Wireless Keyboard

and Magic Mouse.  As you can see in the first picture, I record my vocals relatively far away from my computer and monitor, so instead of walking back and forth in between takes, I can bring my keyboard and mouse over to control things remotely.

So there you have it: the Listen & Learn home recording studio.  There are definitely things I’d like to add to it over time, but for now, I’m quite happy with it.  I’m also more than happy to answer any questions you might have about the equipment I’ve mentioned, or just home recording in general.  Let’s tackle them in the comments!

by M-Audio?  Excuse the pun, but I couldn’t help myself :)  Maybe you have no idea what a preamp is, and that’s totally fine.  Because the truth is, until a few months ago, neither did I.  Basically, what a preamp does is takes the signal from a microphone or instrument and boosts it so that it can be recorded.  In other words, I can plug a microphone and guitar into my preamp (which is connected via USB to my computer), do my thing, and voila!  I have a high-quality recording.

Before my preamp arrived earlier this week, I had been recording all of my guitar tracks just by setting up my Blue Snowball Microphone

and playing my guitar directly in front of it.  This worked well enough; my Snowball mic is awesome, but I knew there had to be a better way.  With my old setup, any background noise made while recording the guitar part could be heard (the most common being me knocking the guitar against my desk – oops!).  Now, since the signal goes directly from my guitar into the computer via the preamp, that problem is eliminated.  That means a much cleaner-sounding guitar track, resulting in a much better recording overall.  Oh, and the preamp even has a headphone jack right on the interface so that I can monitor the sound as I am playing!

I should mention that since my aforementioned Snowball mic connects via USB, I don’t need to use my preamp when I record my vocals.  But since there are two microphone inputs in addition to the instrument input, that leaves the option available if I get a new microphone at some point in the future.  You can’t beat that versatility.

I haven’t had much time this week to play with my new toy, but you better believe that I’ll be spending a good deal of my three-day weekend doing just that!  Hopefully I’ll have some brand new songs to show for it, too.  What are your plans this weekend? Are you one of the really, really lucky people who has a four-day weekend?  Happy Birthday, Mr. Lincoln, and for all of you readers who got to stay home in honor of it, enjoy!