Being a Music Therapist During the Holiday Season

Well, Christmas has passed and the New Year is almost here. To my fellow music therapists out there: Congrats! You’ve almost made it through the holiday season!

The holidays bring so much joy, cheer, excitement, and fun; they always provide for an interesting music-making experience. This is my first holiday season as a music therapist, and I’ve noticed just a few things:

END_OF_DOCUMENT_TOKEN_TO_BE_REPLACED

By the time October 31st rolled around, I completely lost count of how many times Parker had already worn his Elmo costume. My mother-in-law bought it at the beginning of September, and every time Parker saw that red fur, he’d beg for it. Needless to say, we didn’t have to twist his arm to participate in a little pre-Halloween photo shoot with Zach’s cousin Matt. 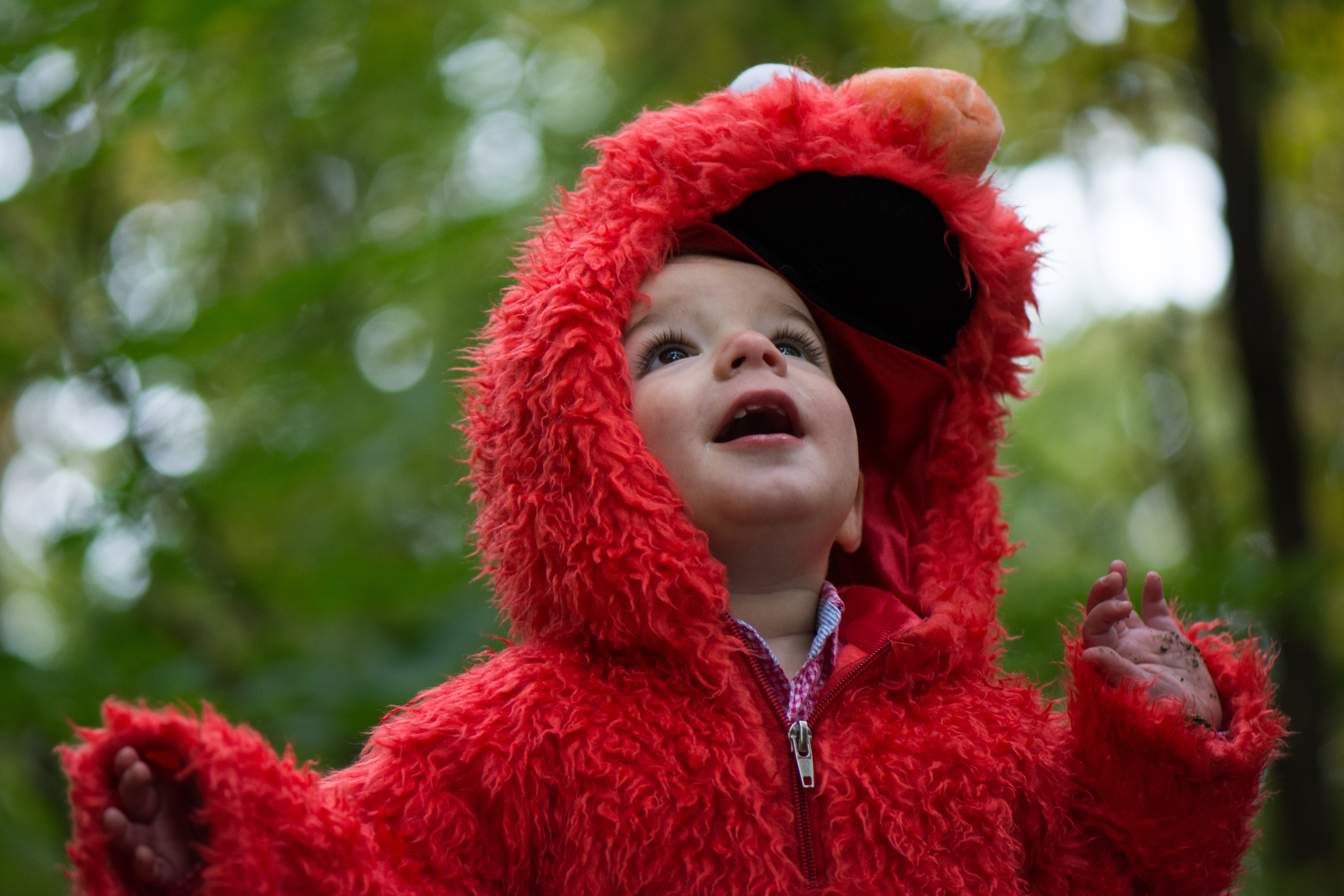 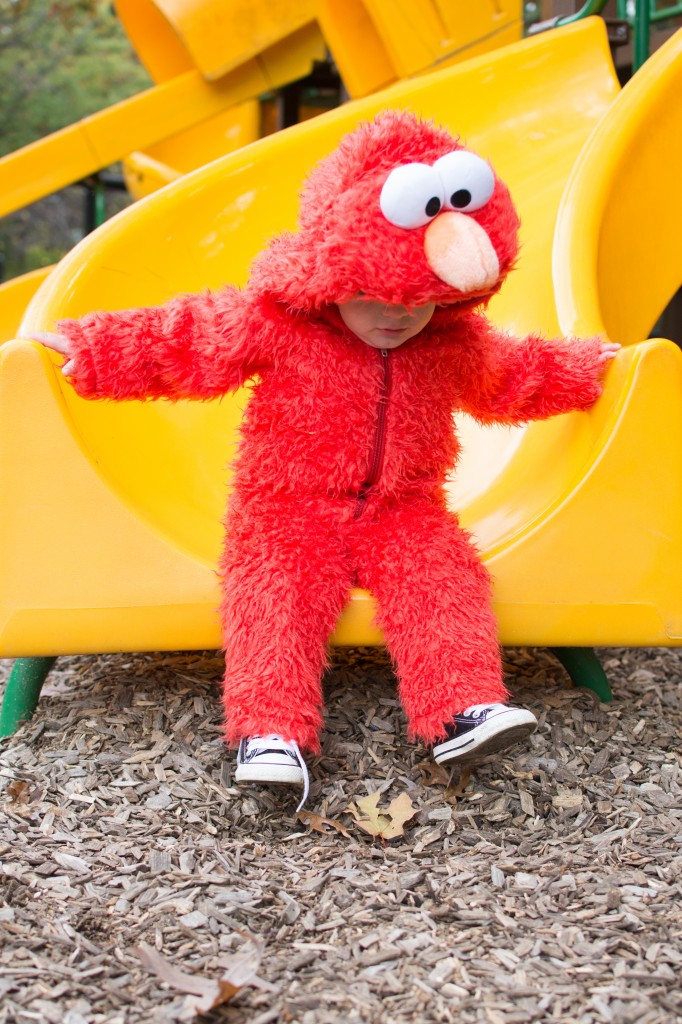 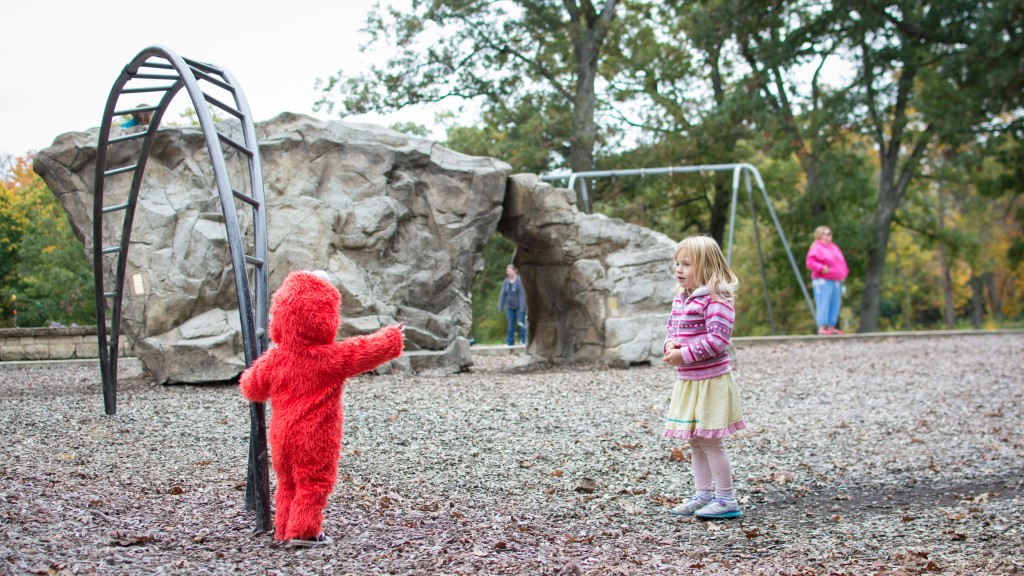 On the afternoon of Halloween, Zach and Parker met up with our friend Jose Carlos and his twin boys to do a little indoor trick-or-treating. Thank goodness they had that option, because we decided it was too cold to go visit our neighbors like we had originally planned. 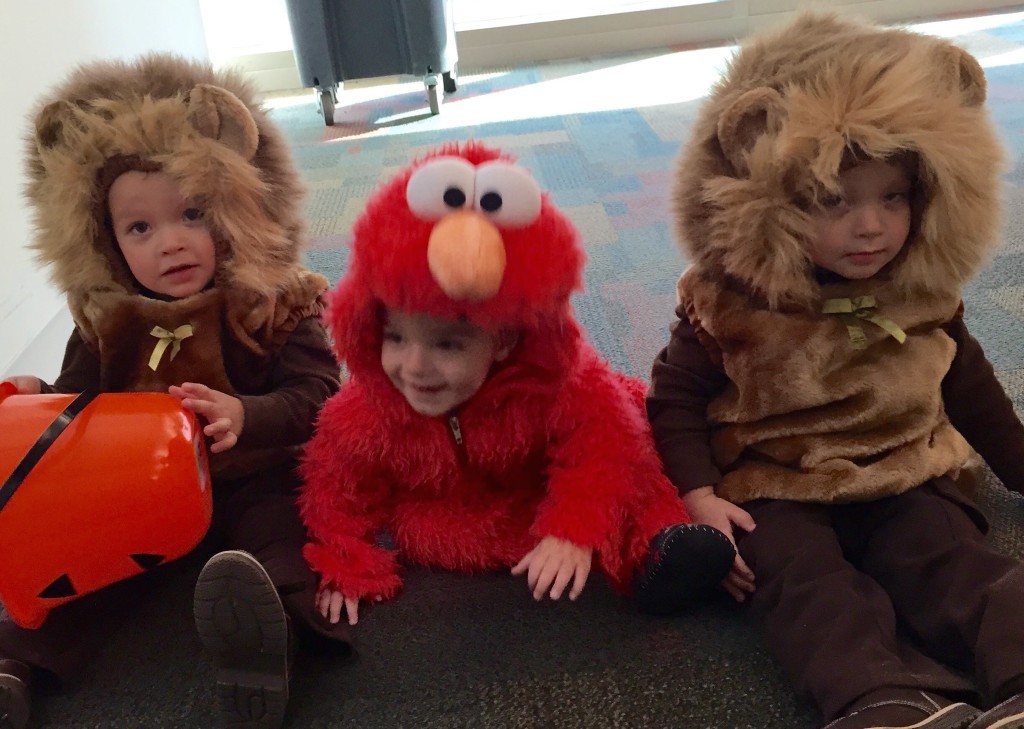 Zach treated Parker to his first taste of Halloween candy, and that little bit of sugar really got him going (as evidenced by his feat of strength below). All in all, Parker’s 2nd Halloween was a big success for everyone — he slept reeeeally well that night :) 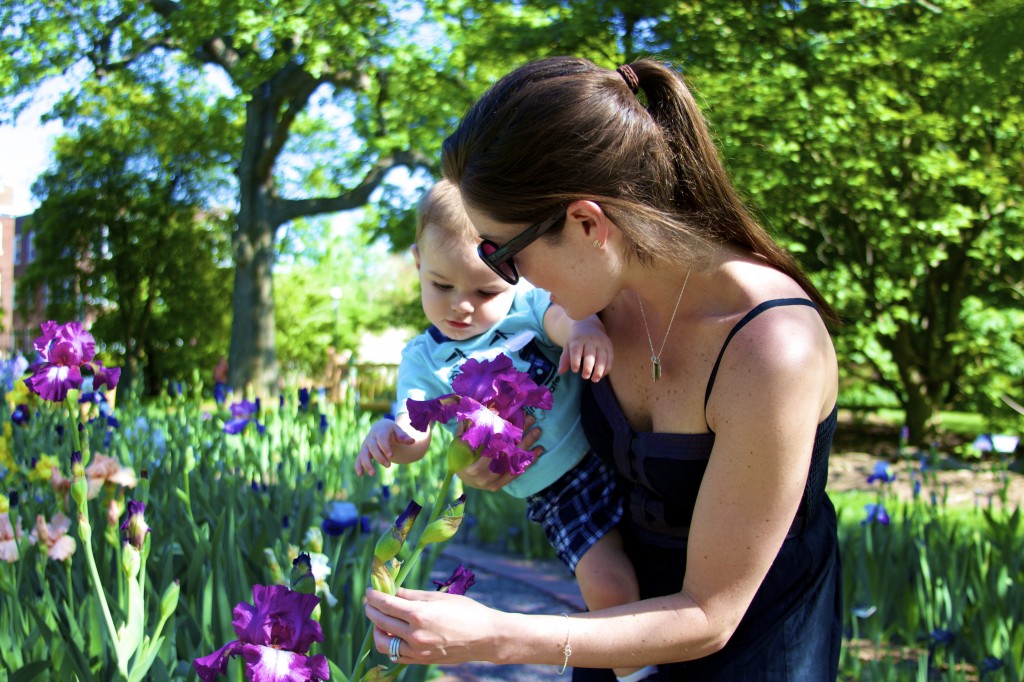 Had Parker been born just 3 weeks earlier, I would have celebrated my first Mother’s Day last year. But instead, I celebrated being an almost-mama; one of my last quiet, lazy Sundays for a long, long time.

This year was quite another story. Life as Parker’s mom is anything but quiet and lazy, and Mother’s Day was no exception. Zach surprised me with a family weekend in St. Louis, so we headed down on Saturday. Our day started at the St. Louis Zoo with thousands of other families who had the same idea. It was crowded, but we had so much fun introducing Parker to all the animals. He loved them all, but his favorites by far were the birds. Go figure! 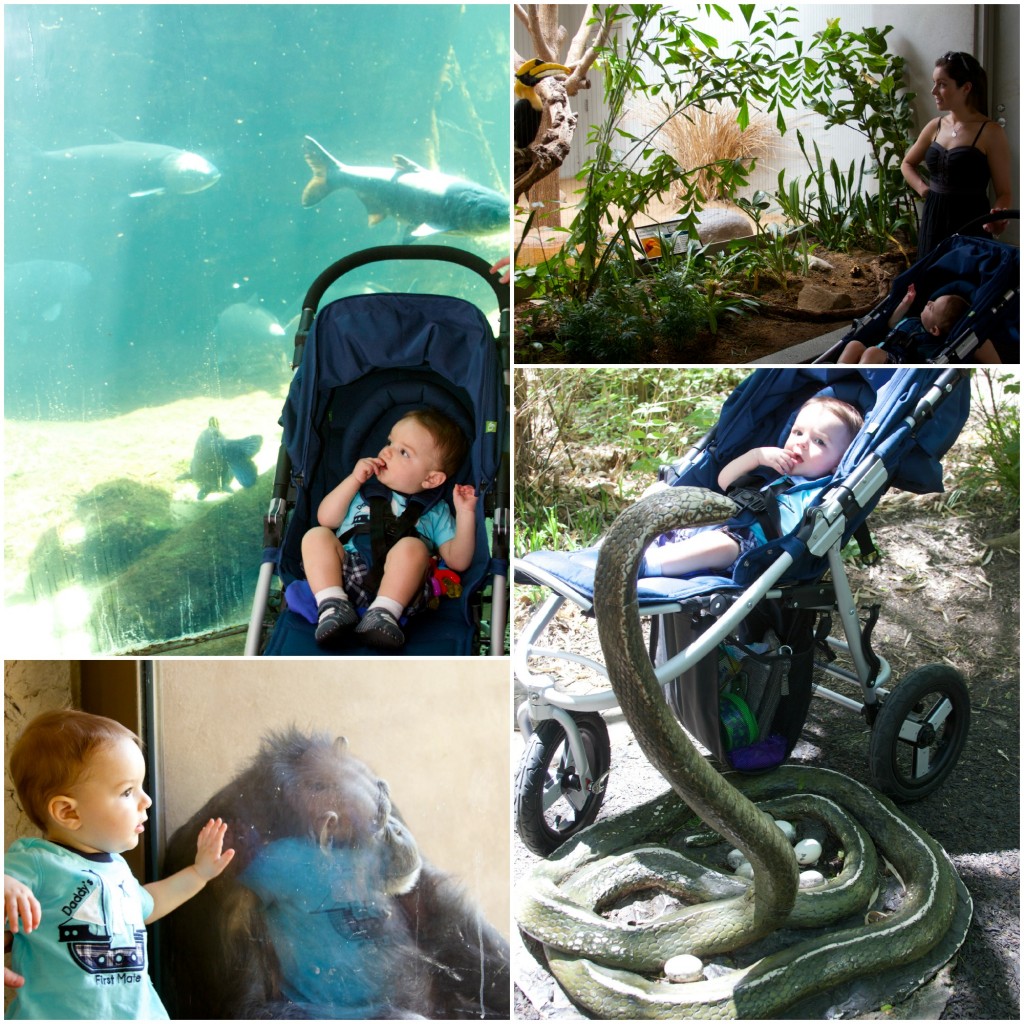 After a few hours at the zoo, all three of us were ready for a relaxing, low-key afternoon. We wanted to take full advantage of the gorgeous weather, so we headed to the botanical gardens. I really could have spent the entire day there! (And we almost had no choice — Zach lost his keys and we spent the last half hour tracing our steps with no luck. Fortunately, someone turned them in to the front desk.) 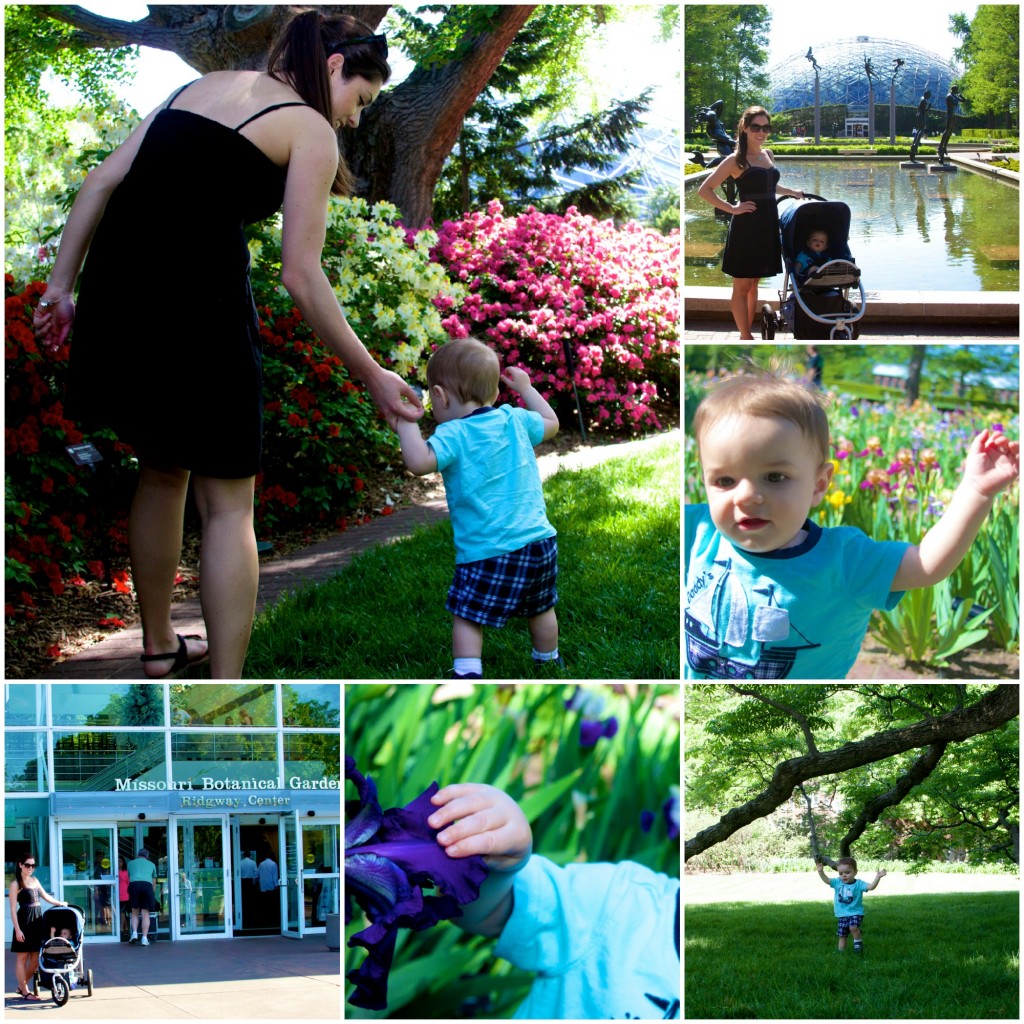 Our next stop was the hotel, where we rested for a few minutes before getting ready for dinner. Zach’s sister suggested we try Bailey’s Range, which was within walking distance of where we were staying downtown at the Hyatt. All I can say is OMG. Our dinner was amazing, and I haven’t stopped daydreaming about it since! Parker was an angel all the way through our meal, and then he fell asleep just in time for dessert. Perfection. 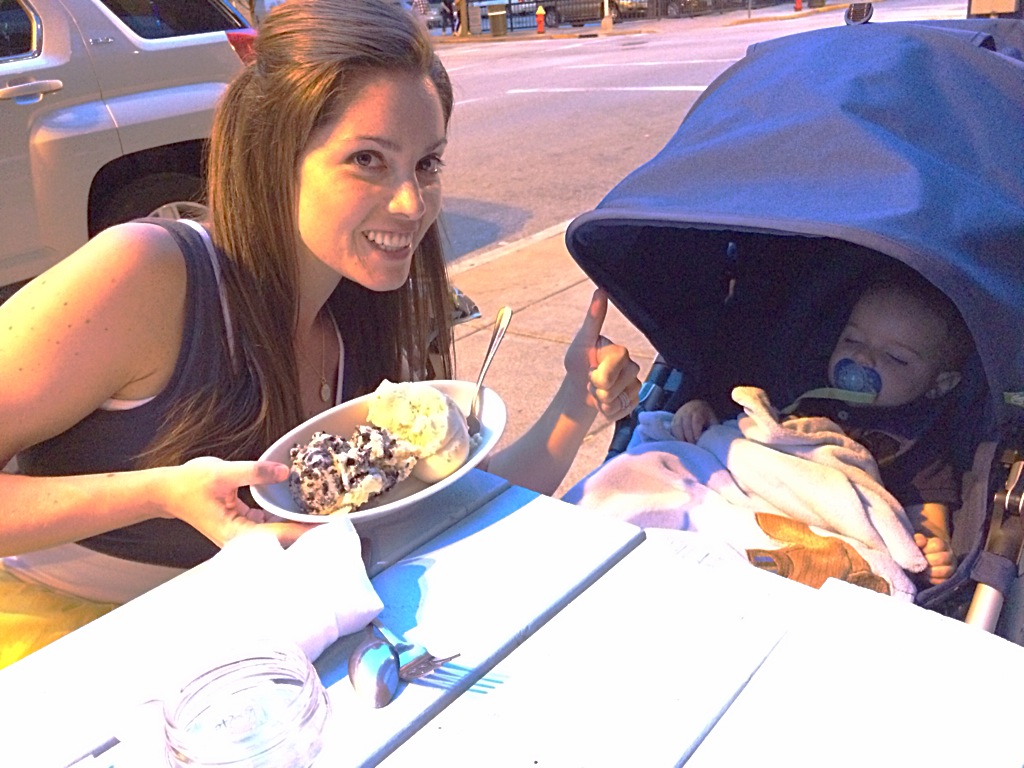 We headed back to the hotel after dinner and went to bed early. The next morning, we had a yummy breakfast at the Hyatt before hitting the road back to Springfield. We spent Sunday doing family stuff and getting more fresh air before I taught my Church Mice music class, and then had dinner at Zach’s parents’ house.

It was a nearly perfect first Mother’s Day weekend. The only thing that could have made it better would have been getting to spend part of it with my own mom, but she was in Phoenix meeting my new nephew, Alec. Luckily she lives just down the street and I see her all the time :)

One more little surprise from Zach: this adorable video he put together and played for me on Mother’s Day. It made me cry and feel SO incredibly blessed to be the mother of the most amazing little boy. 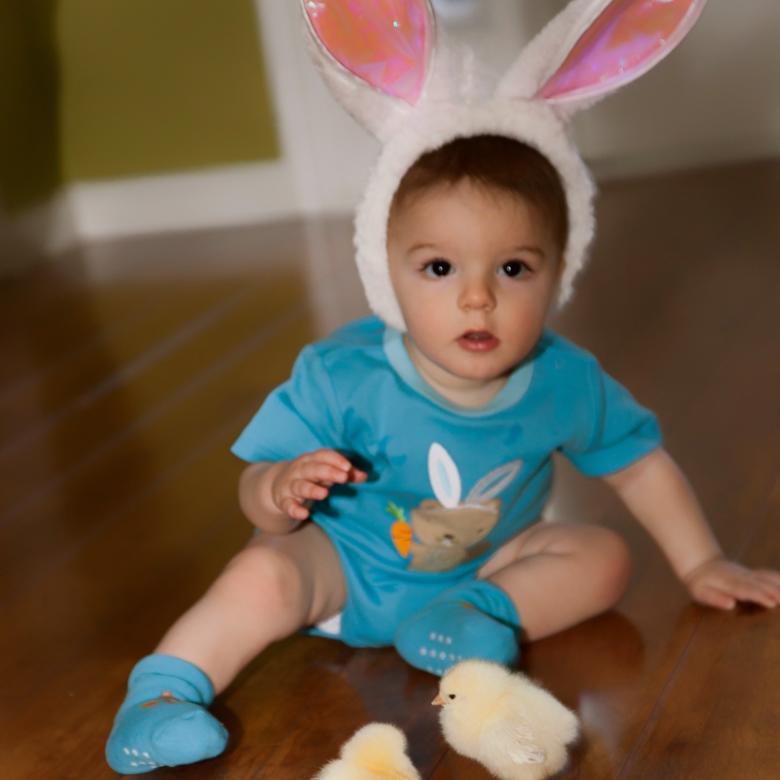 Easter has always been a holiday I’ve never gotten too excited about as an adult. Of course I have always enjoyed dressing up, going to church, singing with the choir and reflecting on the meaning on this day, but that was about it. However, this year I learned that Easter is a whole lot more fun when kids are involved!

We started the holiday weekend with an Easter egg hunt, although Parker could have cared less about the “hunt” part. He did, however, enjoy playing with the plastic eggs and chilling out in the sun with his Rambach cousins, Maggie and Ellie. 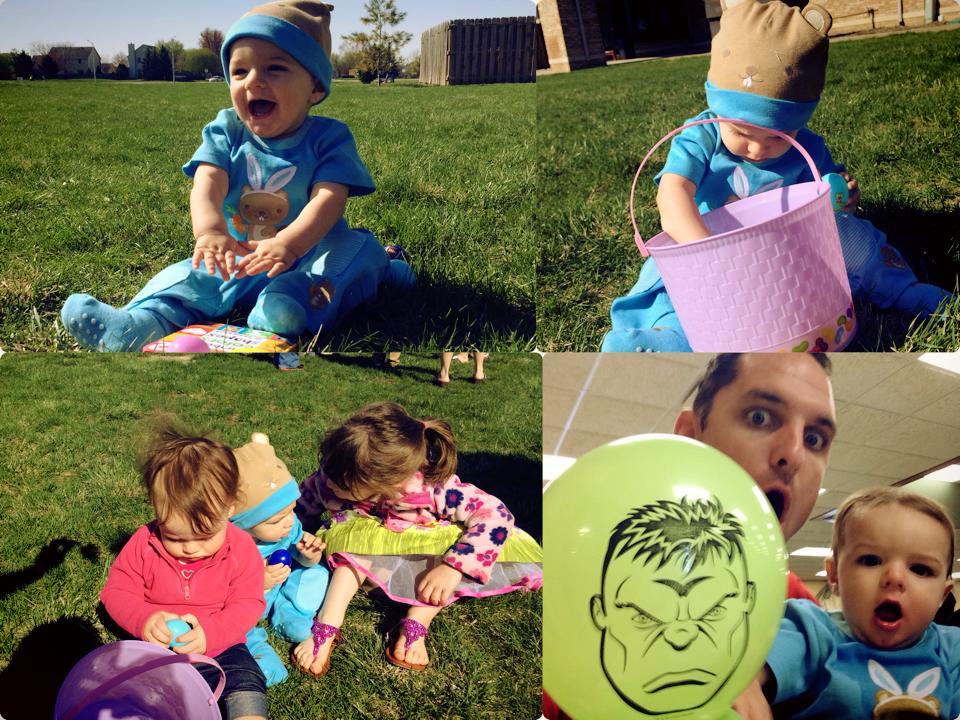 On the night before Easter, Zach’s parents always host a Passover Seder to honor their Jewish roots. Parker enjoyed some matza and matza ball soup along with some other yummy goodies. Then on Easter morning, we headed to Washington Park and enjoyed the GORGEOUS weather. We seriously lucked out with an amazing weekend of sunshine and warm temps. 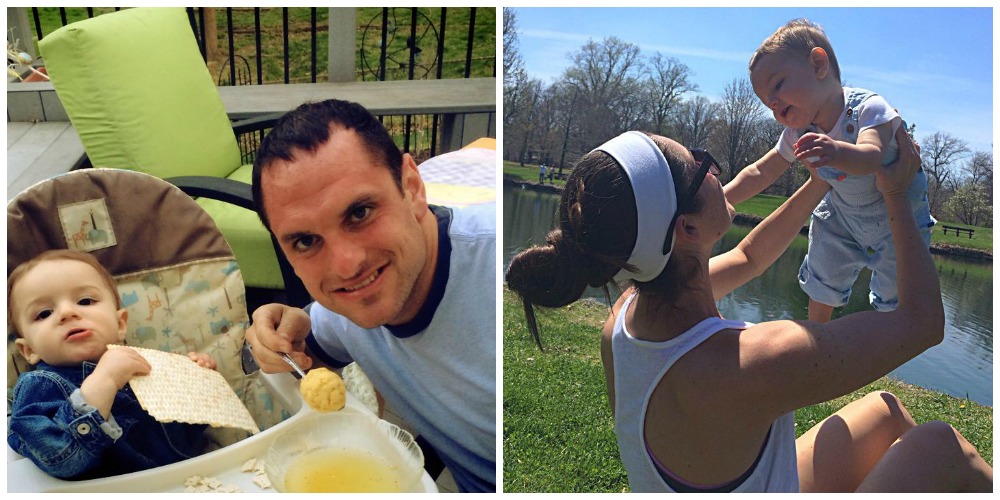 Here’s our attempt at a family selfie. Haha! Sadie could have cared less about smiling for the camera, but Parker showed off his waving skills. He is getting really good at waving hello and goodbye to people. It is so cute! 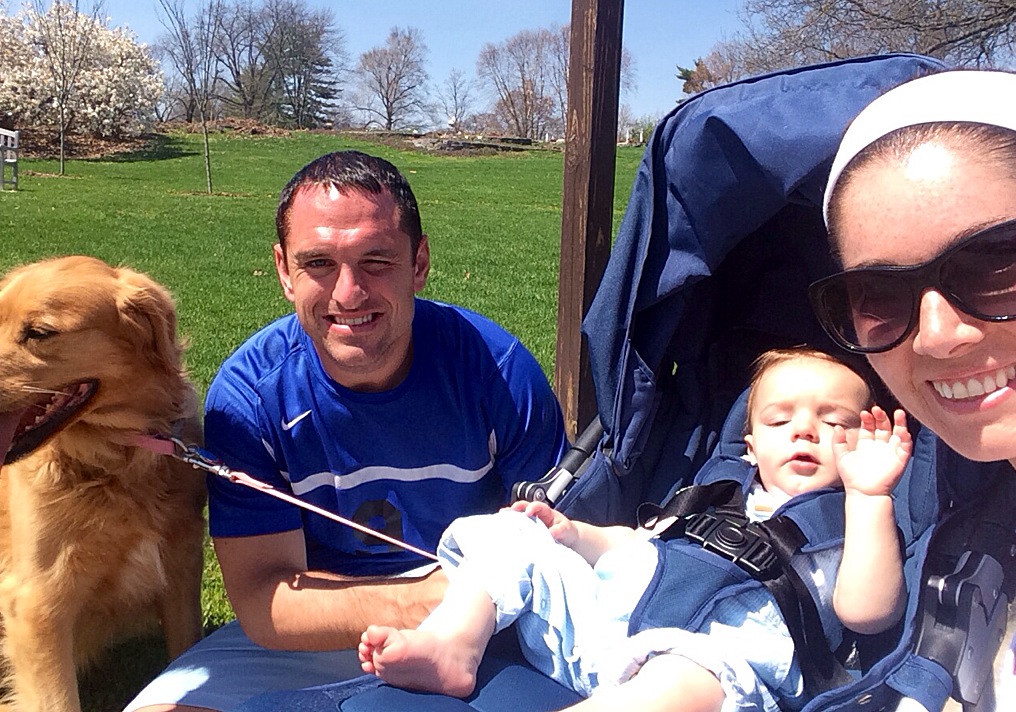 It was so much fun spending time with the Rambach and Wilderson cousins all weekend. Parker absolutely adores his older cousins, especially Mason, who is usually not one for posing for photos. But when Parker was on his lap or next to him, he was all about it! 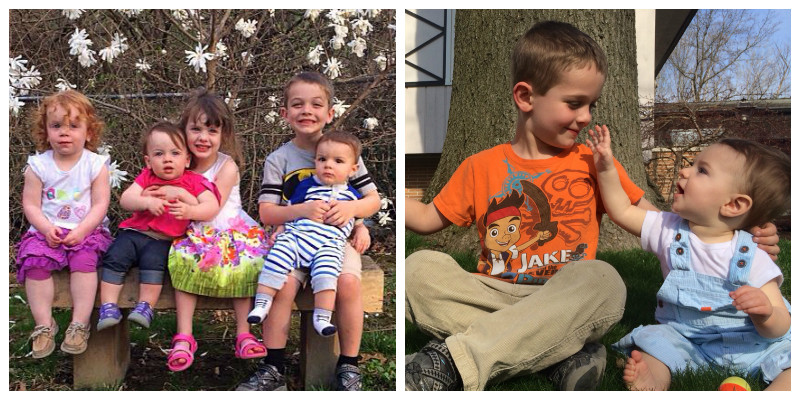 Zach and his dad had a little Easter photo shoot while I was working, and got some funny/adorable shots. How sad is that face in the black and white? Now that is a pouty lip if I’ve ever seen one. 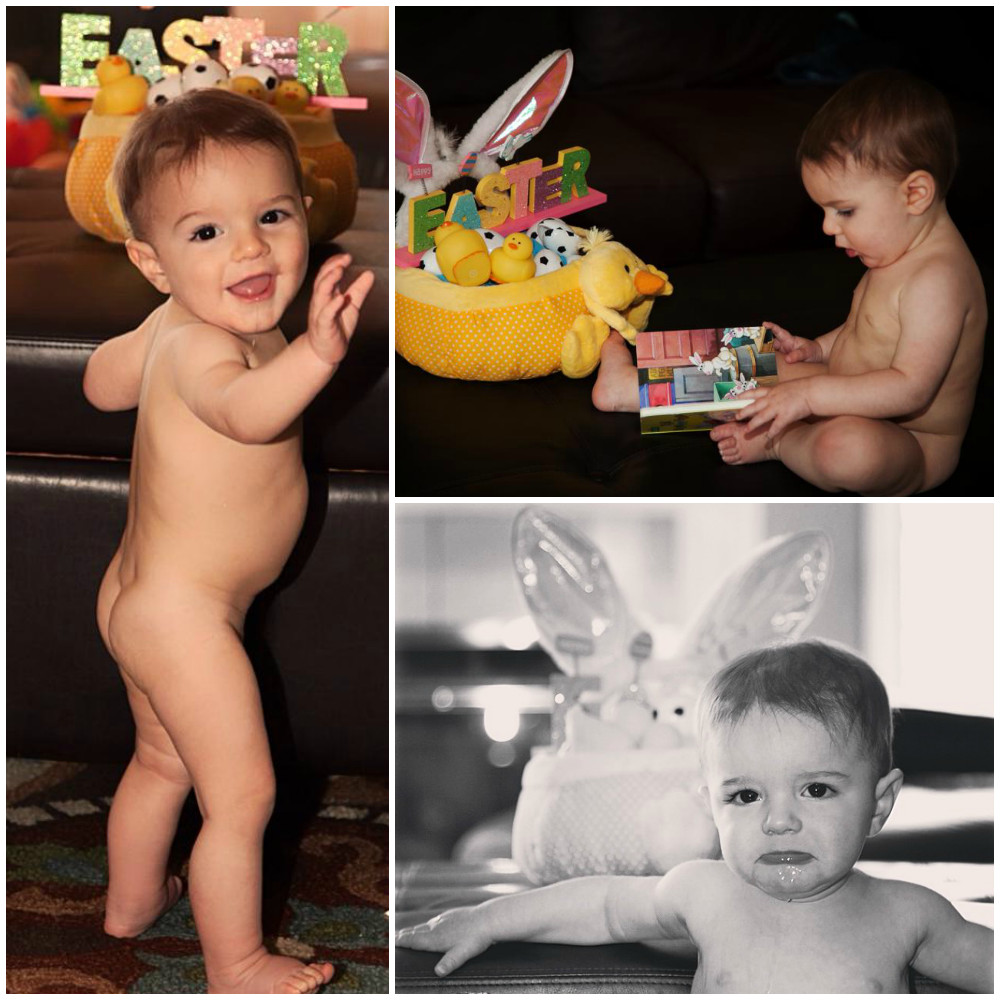 We ended the weekend with dinner at my mom’s house, during which Parker CHOWED. If you have been reading the blog, then you know what a big deal that is! He had veggies, potatoes, a little meat, and even a few bites of our gluten-free/sugar-free dessert.

It’s pretty crazy to think that Parker has now celebrated just about all the major holidays in his 10 months. Only Mother’s Day and Memorial Day are left…followed closely by his first birthday. But I am so, so, so not ready to go there yet! So I’ll wrap up this post with one last family photo from Easter. 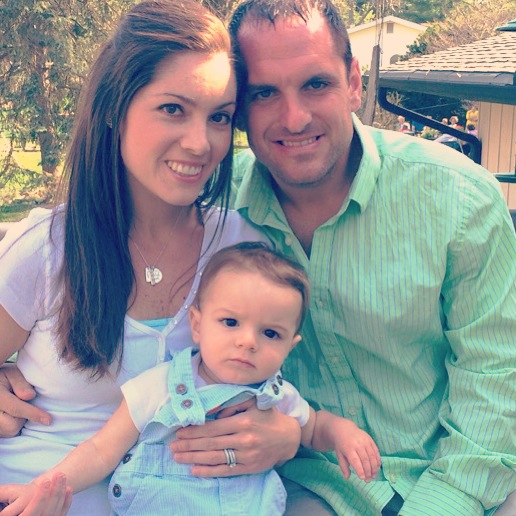 Zach and I have never been big on Valentine’s Day, so I wasn’t expecting any sappy gifts this year. But he totally surprised me with something WAY better than chocolate or flowers: adorable Valentine’s photos of Parker. I found them waiting for me on his dresser, which completely made my day.

SHOCKINGLY, we got another snowstorm that day, which meant we were housebound (the theme of Winter ’14). Later on in the afternoon, I saw a few students whose parents were willing to brave the terrible weather, and then we celebrated Valentine’s Day with my mother-in-law, who had brought some gifts over.

We went over to my parents’ house for a Valentine’s dinner, and then were back home and in bed by 9 pm. Just another wild night for us crazy kids ;) It’s hard to believe that there are just a couple holidays left before Parker turns 1, which means we are almost out of “firsts”.