“Under the Sea” Playroom

On the morning of Parker’s birthday, we took him downstairs so that he could open up his BIG gift: a brand-new playroom! I’m so happy we caught the reveal on video, although he has since grown much more excited about it than he was that morning.

This playroom has been a work in progress since the day we moved in. We referred to it as the “Bozo room” for the longest time, because this is how it looked originally. 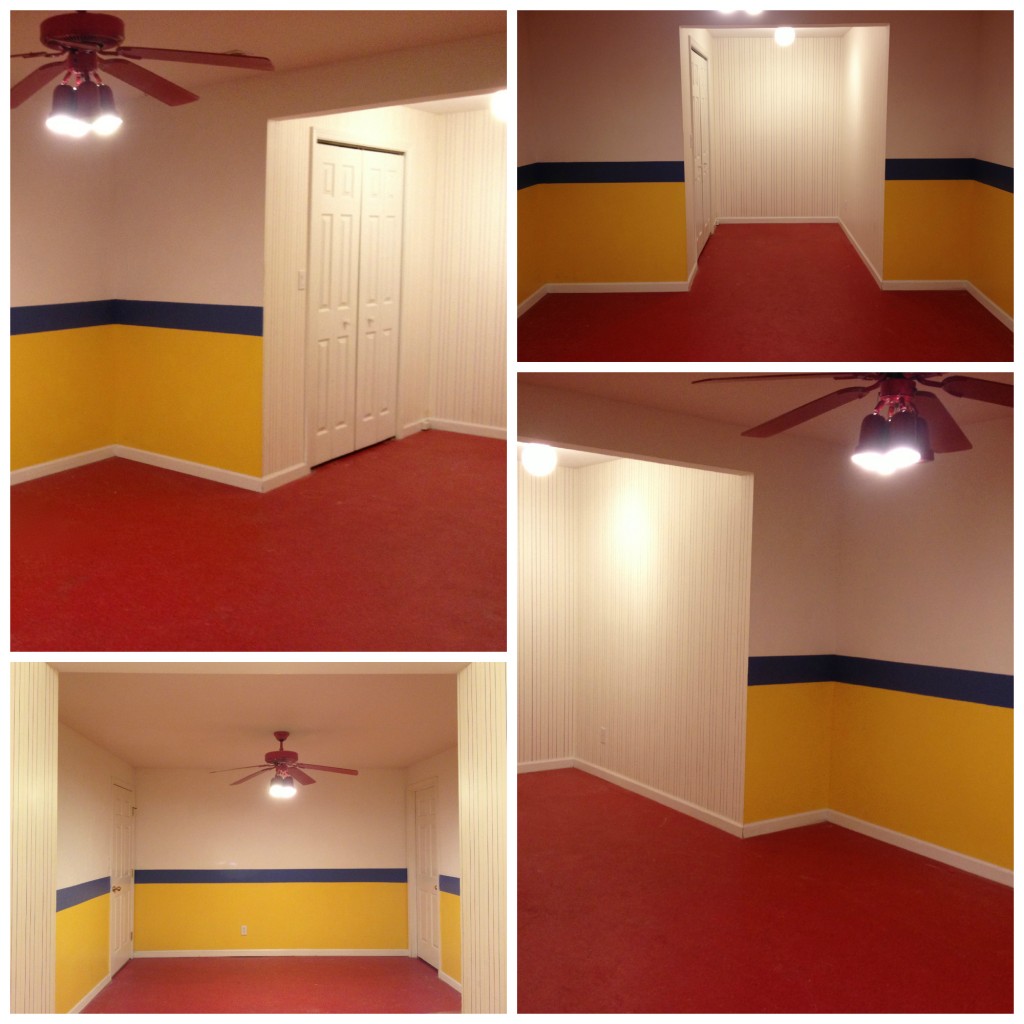 I wrote a blog post about the beginnings of our playroom makeover way back before Parker was born; it only took 15 months to complete this little project! Isn’t it amazing what a coat of paint and foam tile flooring can do to a room? 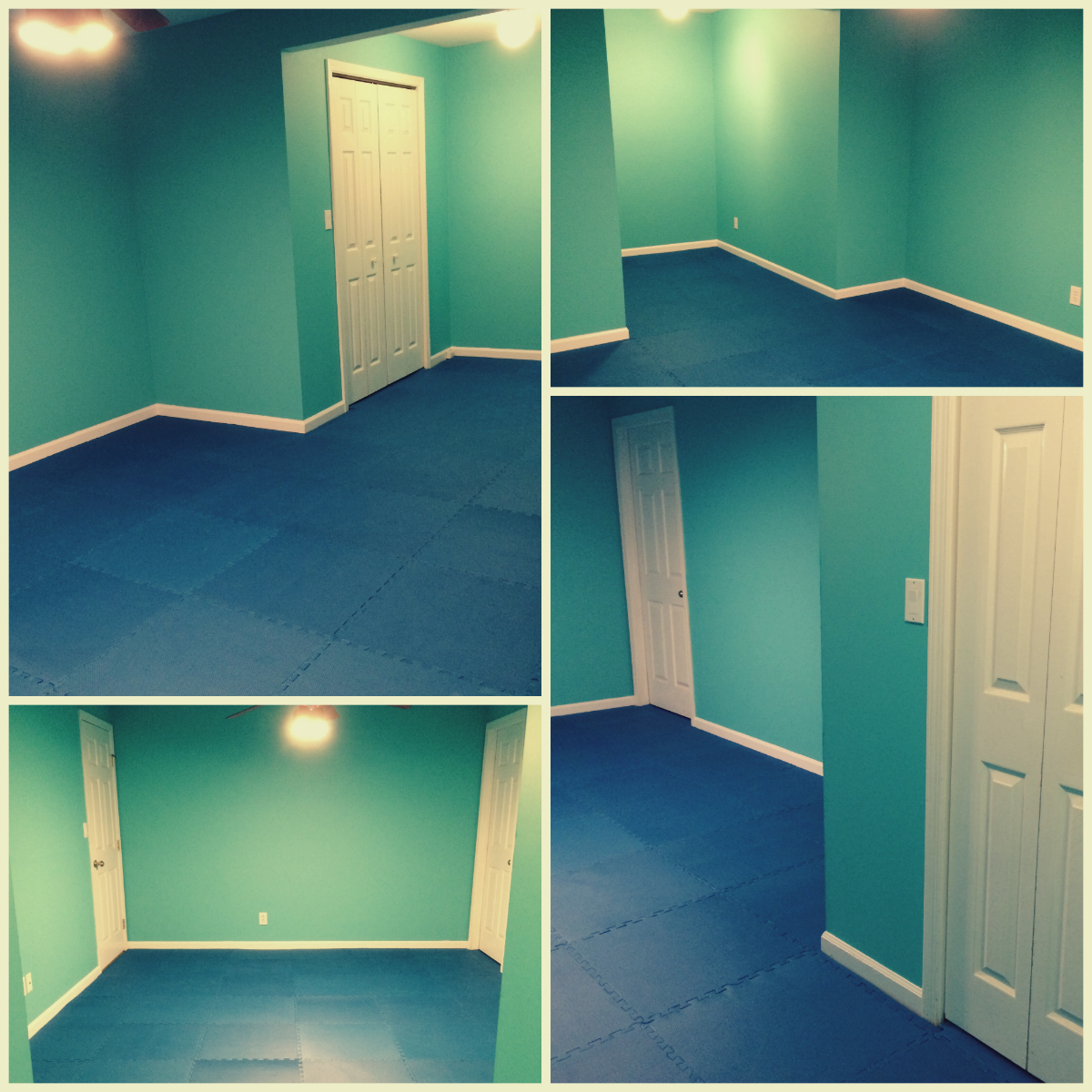 The last week or so before Parker’s birthday, we spent just about every evening downstairs putting in the floor, decorating the wall with decals, putting together the furniture, and slowly moving in the toys. I took some photos before that last step, so in these photos the room is looking pretty stark. Trust me, it’s chock full of toys now. 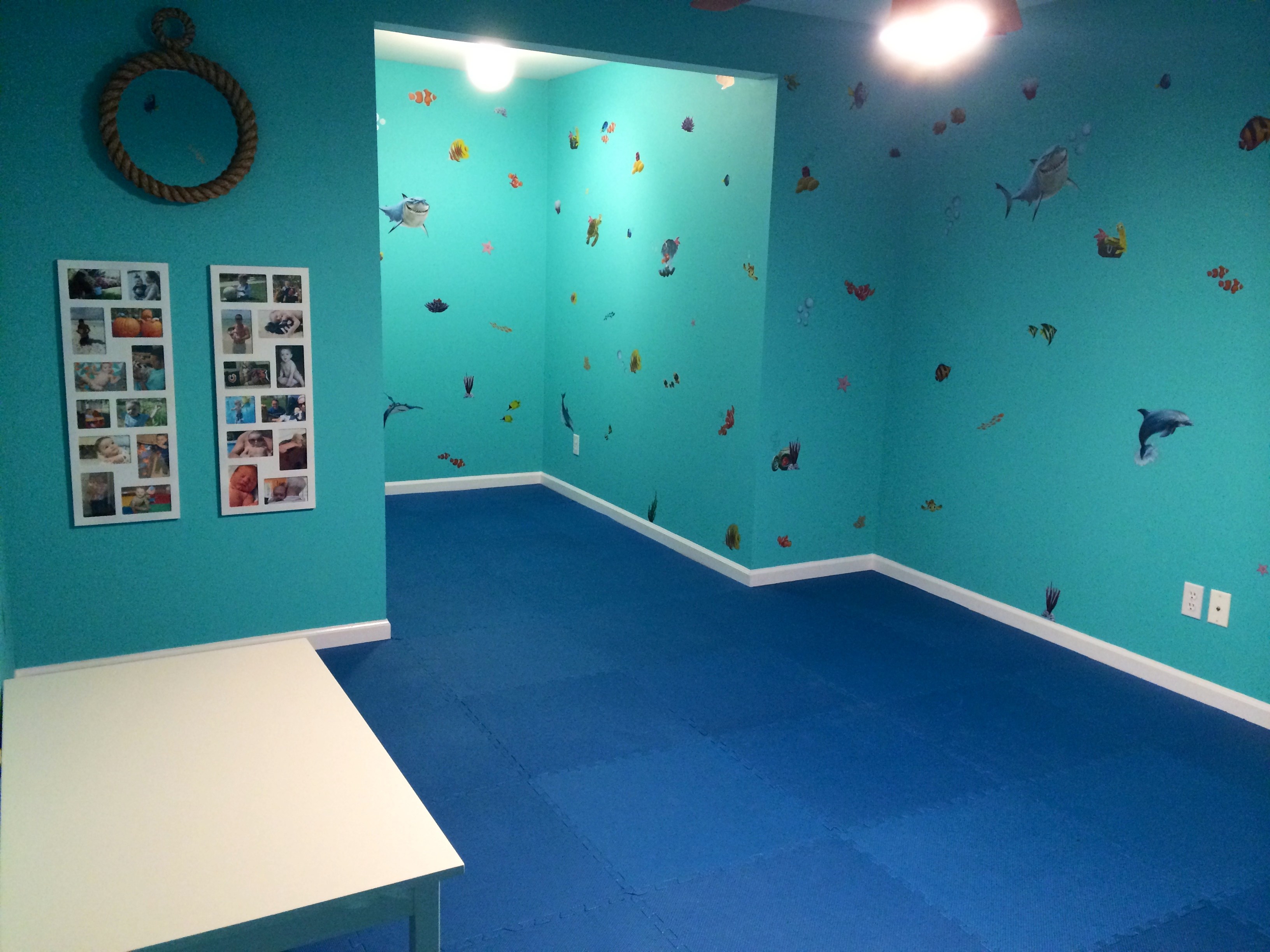 It was actually my mom who came up with the ocean theme for the room. I had chosen the wall color last year just because it was bright and pretty, but I didn’t really have a them in mind. Once we agreed on the ocean theme, we ordered the blue foam tiles. Zach found the decals online to complete the look. 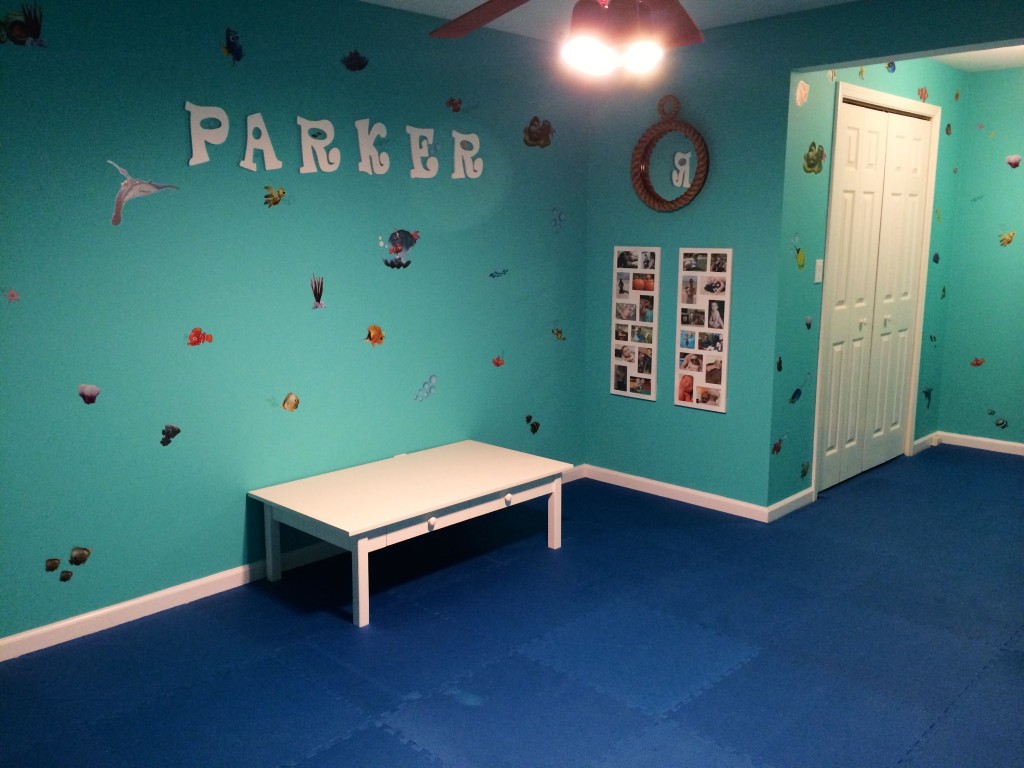 My mother-in-law ordered the Carolina craft table from Pottery Barn Kids as a gift for Parker. It comes with two different sets of legs, so there are longer ones for when Parker gets bigger. We also have chairs for the table, which we are storing in the closet until Parker is old enough to use them. 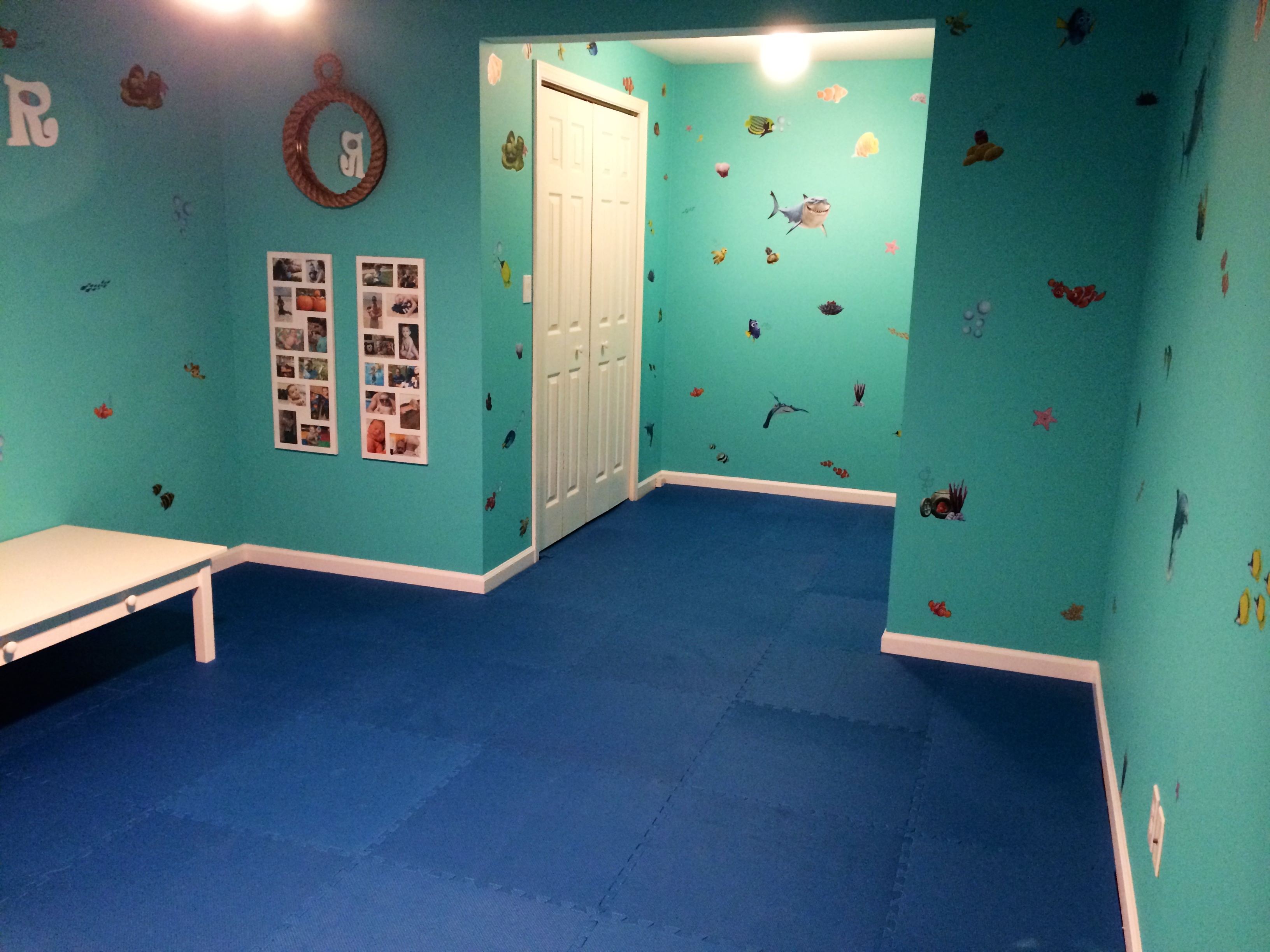 The nautical rope mirror is also from Pottery Barn Kids. I found the frames at Target, and filled them with some of my favorite photos from Parker’s first year. Never did I expect that those photos would be one of his favorite parts of the room! 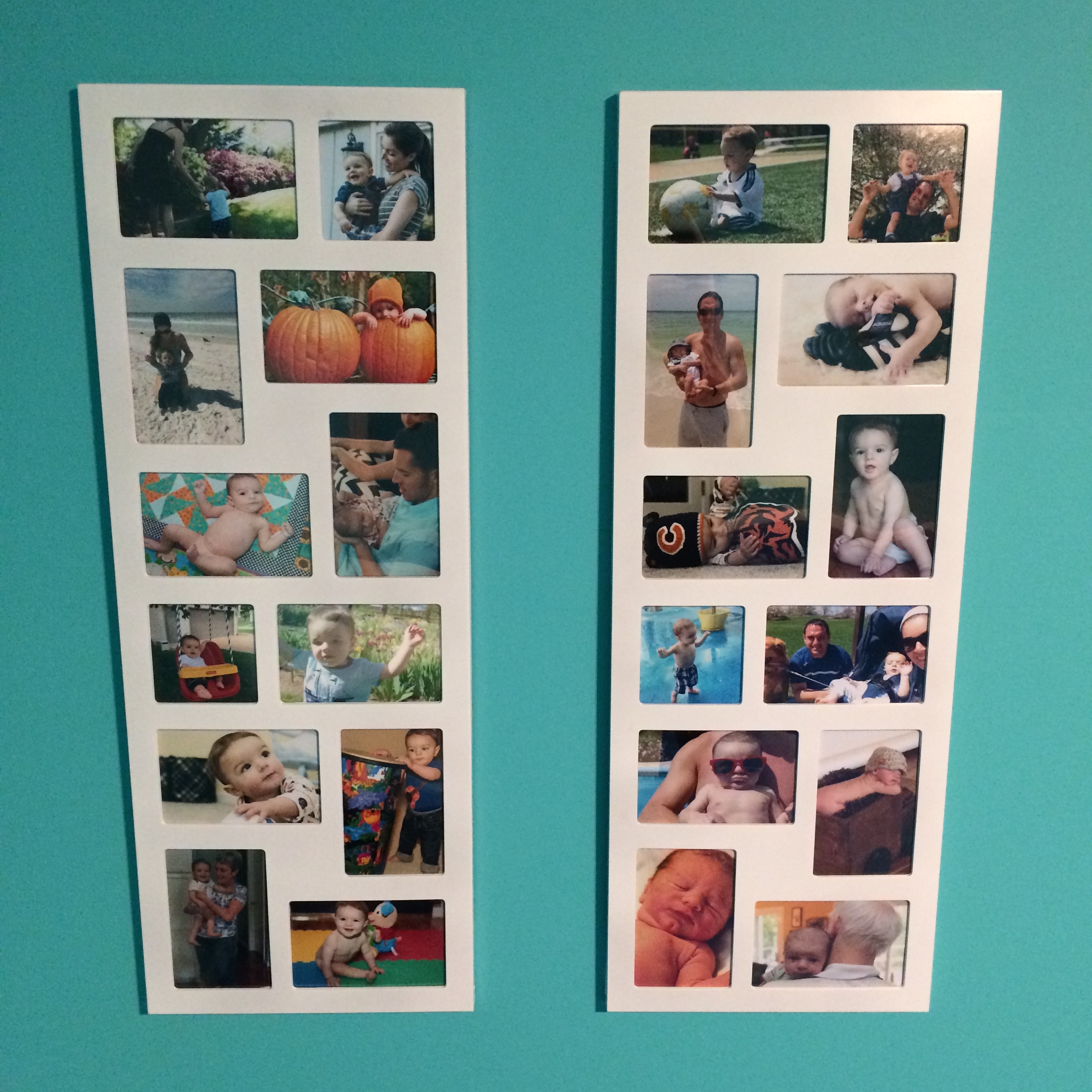 Here is a close-up shot of the photos. It’s so funny to watch Parker go up to the frames and touch them, and then look at each photo. He is a little vain when it comes to pictures of himself ;) 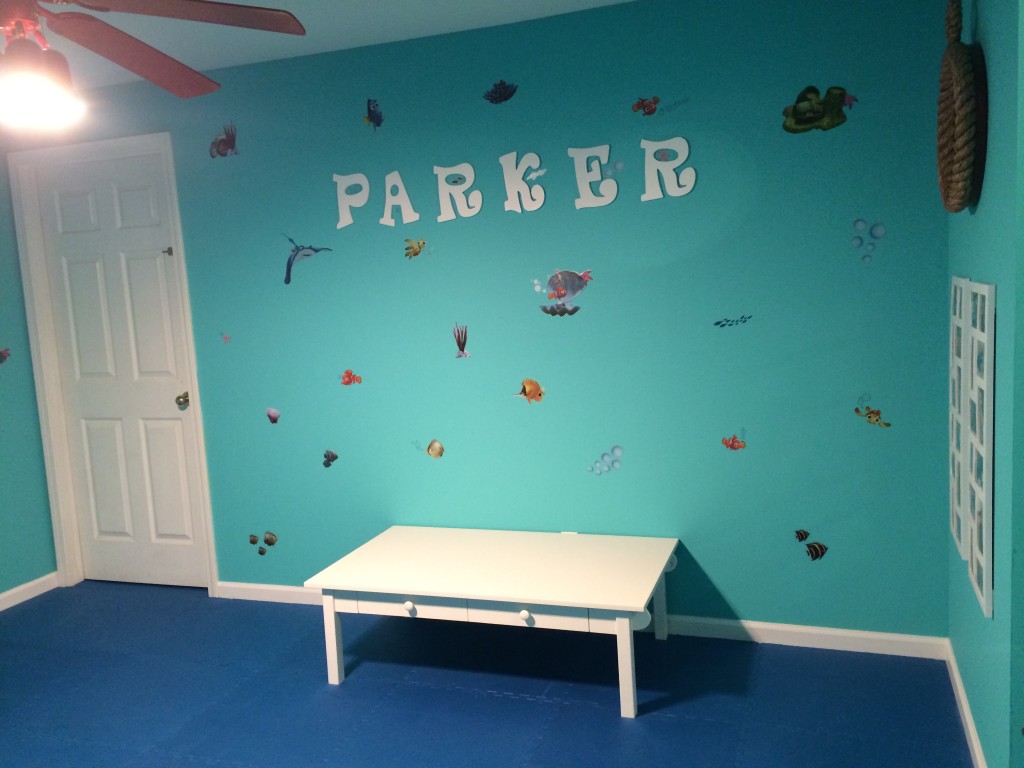 The wooden letters are from Hobby Lobby. I have added a few more decorative touches to the room since these photos were taken, though I wanted to keep the walls pretty sparse (besides the decals). I imagine one day they will be full of Parker’s art work. 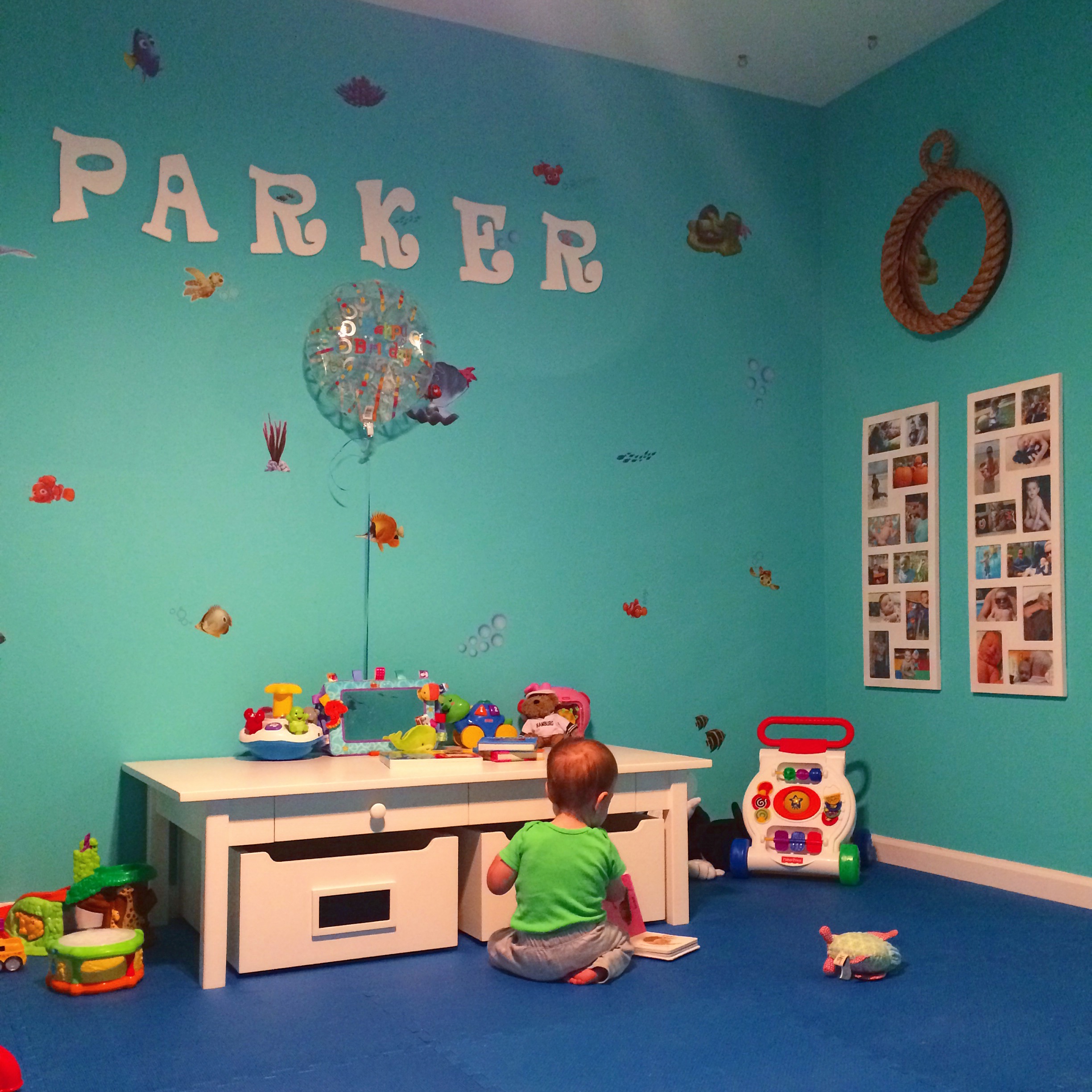 Parker received SO MANY TOYS for his birthday that this room was pretty much a necessity. I love that it is self-contained; there is a door to the downstairs family room that can be completely shut, so when we are playing in the playroom, he almost forgets that any other rooms exist. It’s big enough that we don’t feel claustrophobic, and with all the toy choices, he doesn’t get bored easily.

This summer has been insane so far, and we haven’t had much time to spend at home as a family. After Zach gets home from the World Cup in Brazil (yeah, that’s a different topic for a different day), the plan is to start hanging out in the basement more often. I don’t think Parker will have a problem with that!