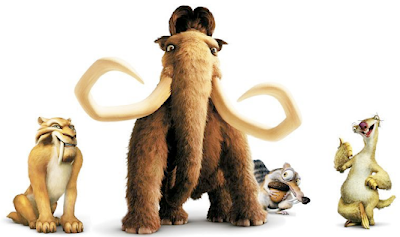 If you’ve seen Ice Age, then you probably recognize these creatures as the main characters.  My song is unrelated to the film, but I loved this picture – and the animals just happen to be the right species!  “The Ice Age Song” is my attempt at consolidating general knowledge about this prehistoric era in a way that children can understand.

Now, this is not a topic I’d cover as a matter of course.  But my sorority’s local alumnae association is hosting a kids camp-in with an Ice Age theme at the Illinois State Museum later this month, and guess who is providing the musical entertainment?  I did actually do a search for songs on this subject, but unfortunately came up empty-handed.  So I got to work writing my own, and this is what I came up with:

Millions of years ago,
The earth was covered in ice and snow,
No oak tree grew, no grass on the ground.
Only glaciers all around.
The air was cold, the land was bare,
In the Ice Age everywhere.

Wooly mammoths, and cave bears too,
And wooly rhinos, just to name a few.
Were animals who lived back when,
But have become extinct since then.
There were also reindeer with their great big hooves,
And horses, bison and wolves.

35,000 years before now,
The Ice Age people lived somehow.
They hunted with tools they made from rock and bone,
In caves and shelters they found a home.
Fire kept them warm and scared the animals away,
They were able to live this way.

The Ice Age was a time of discovery
For those who came before you and me.
Eventually the ice began to melt away,
And the Earth evolved into what it is today.
Now glaciers and fossils and drawings show,
That the Ice Age existed long ago.

I kept the information pretty basic and straightforward, bearing in mind that my audience will be made up of late-elementary school students.  My program comes at the end of the evening, though, so by then, they’ll probably already know all of this and then some.  In fact, maybe the kids could help me write “The Ice Age Song: Part 2”.  Hmm…now that’s not a bad idea!