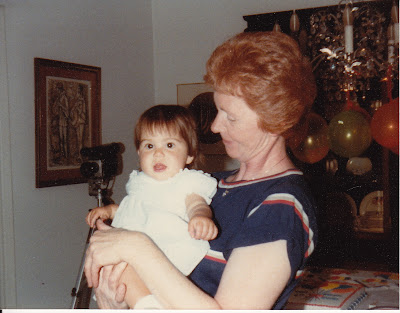 I want to thank you all for the thoughtful comments and emails I’ve received over the last couple of days. As I mentioned in my previous post, my grandma passed away this week. And as difficult as this has been, it really is a blessing that she is at peace now.

My grandma was diagnosed with Alzheimer’s Disease thirteen years ago, just as I was beginning high school. She was only in her early sixties, and had to move into a nursing home a couple years later. As time went on, her memory became worse and so did her ability to recognize me and my family. But the one thing that she never lost was her love of music.

It really was amazing how she came to life when she listened to Frank Sinatra, Neil Diamond, and anything else she’d loved before she got sick. In fact, I was so blown away with the effect music had on her that I began looking into music therapy, even though I was less than a year away from graduating college with a degree in voice performance. After shadowing a music therapist for a couple of months, I decided to graduate early so that I could get started in a music therapy graduate program. My first practicum took place in a nursing home, and I knew I was in the right place from day one.

Even though I had always planned on working with seniors (specifically, those with Alzheimer’s) I ultimately decided that I wanted to specialize in music therapy with children. But I have my grandma to thank for sparking that interest in me. It was so neat being able to share that with her; I will never forget the transformation I saw when I started playing my guitar and singing familiar songs to her. She sang along to every single one of them, and knew all of the words.

I’ve spent a lot of time this week going through old pictures, and listening to my dad and uncle tell stories about my grandma. I’m lucky to have so many memories of her as the person she really was. As sad as I am that my grandma is gone, it’s comforting to know that her disease no longer has a hold on her.

I’m ready for life to get back to normal this week, and that includes picking up where I left off here at Listen & Learn. I will announce the other two winners of the Halloween song topic contest either tomorrow or Monday (a holiday for me!) so check back in soon.