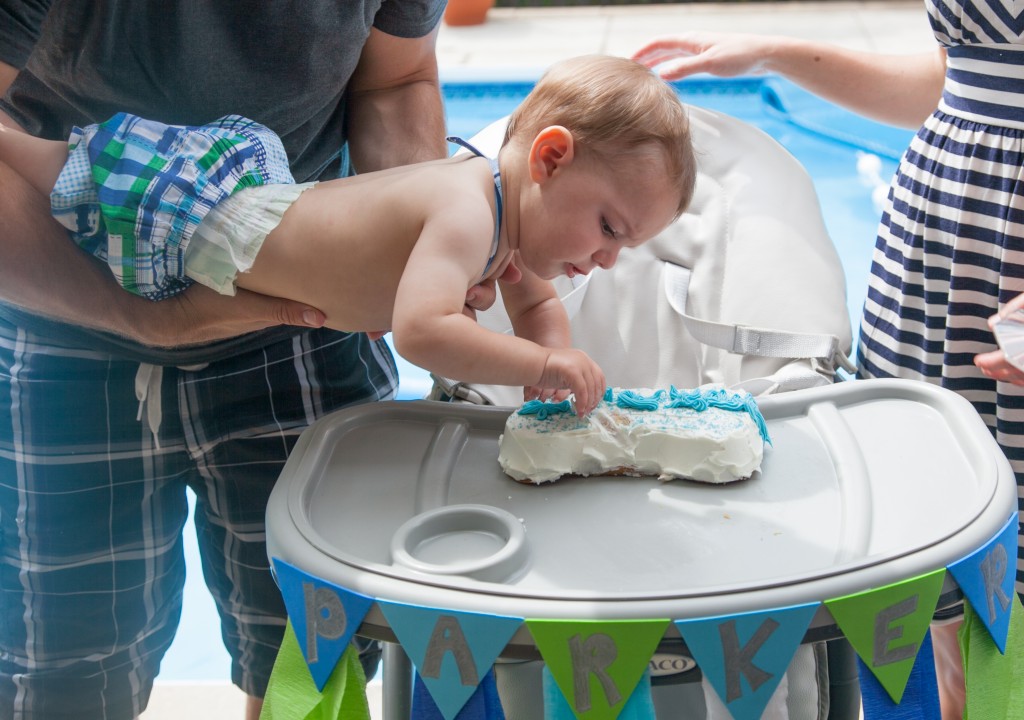 Parker has always been a charmer, but based on his birthday party, I think it’s safe to say that he specializes in small groups rather than large crowds. As more and more people arrived and showered attention on him, it was clear that the birthday boy was feeling more than a little bashful. But the straw would break the camel’s back a little bit later. 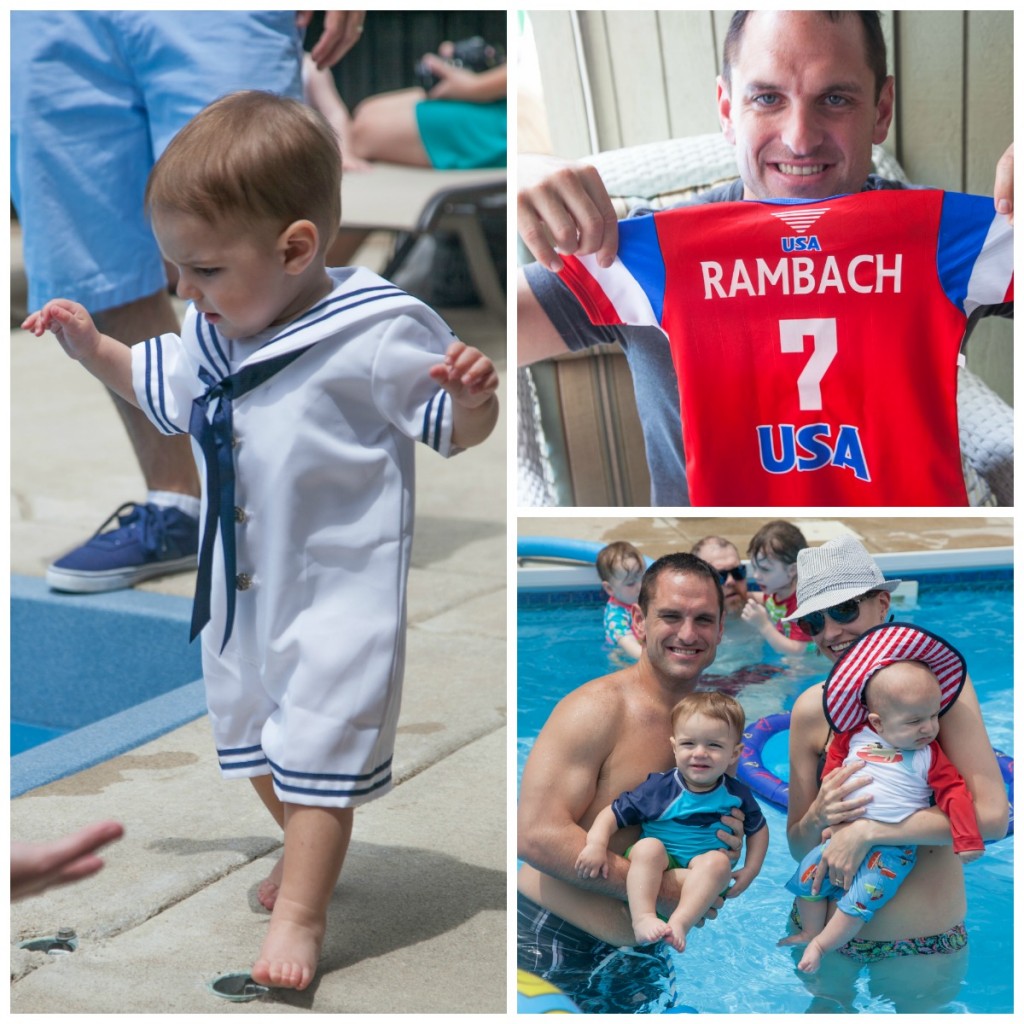 We went all out with the nautical theme to match his nursery and new playroom (more on that coming soon!). So naturally Parker dressed the part in a sailor suit as the guests arrived. But before long, he made his first wardrobe change into swim attire so that he could join all his friends in the pool. 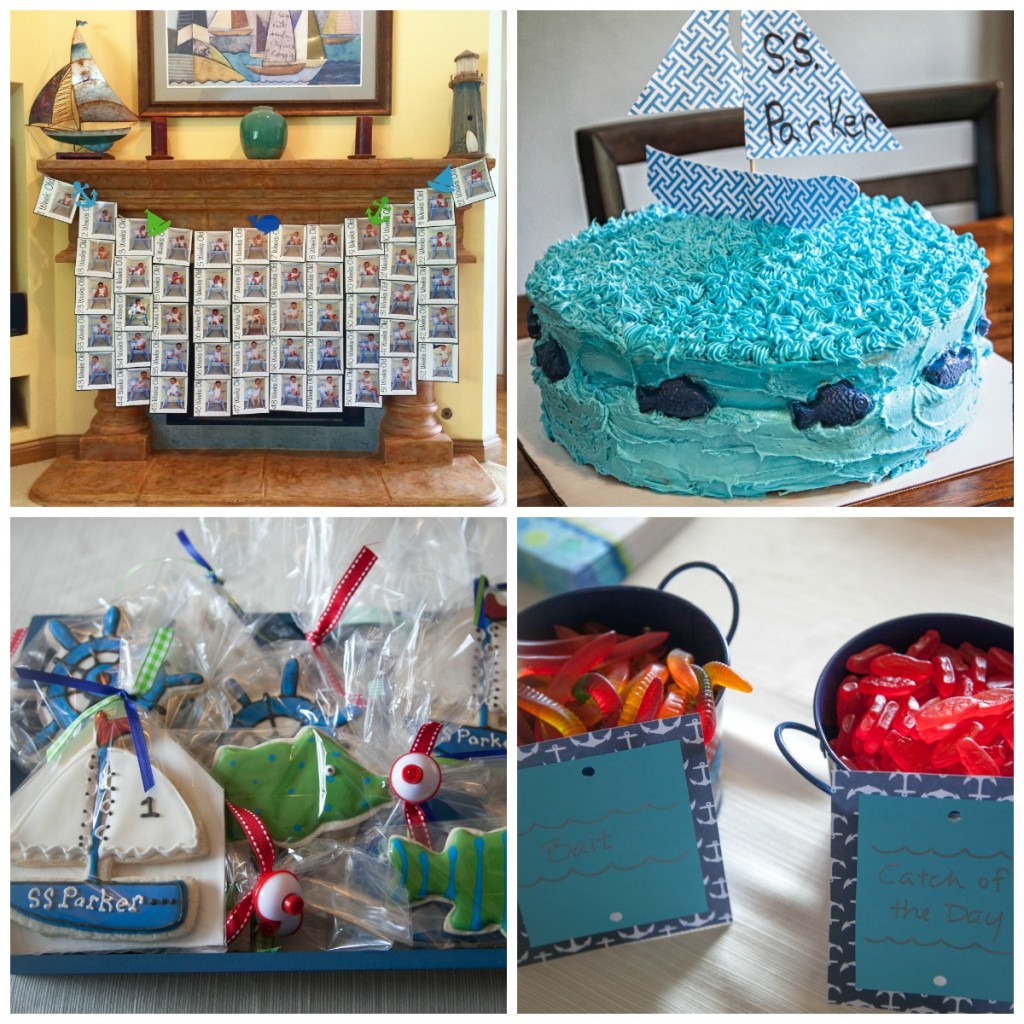 My mom and stepdad went above and beyond by not only hosting the party — which included opening up their pool to a gaggle of babies and toddlers! — but also preparing almost all the food. The spread was pretty fantastic. My mother-in-law contributed with fruit and desserts, and my mom’s friend Terri created the awesome cookies. I’m not much of a chef, so I stuck to decorating and making sure everyone was having a good time. 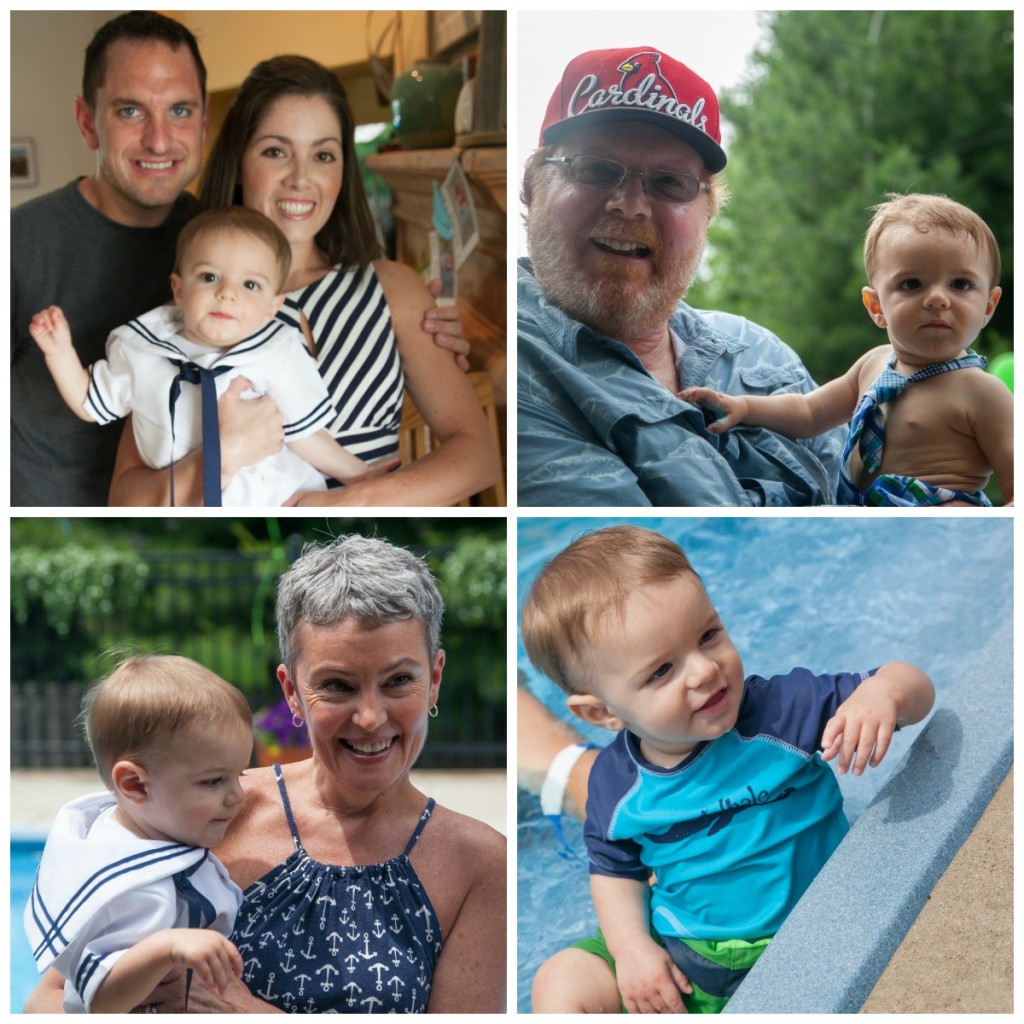 Parker made the rounds throughout the party, but spent the majority of it chilling in the pool with his buddies. He loves his friends! It was so cute watching them interact in the water. Parker looks like such a little peanut next to them (though to be fair, he is the youngest by several months).

The weather was beautiful…a perfect day for a pool party. It was fun watching everyone splash around and have a good time. That is by far the most people ever to swim in that pool at once. 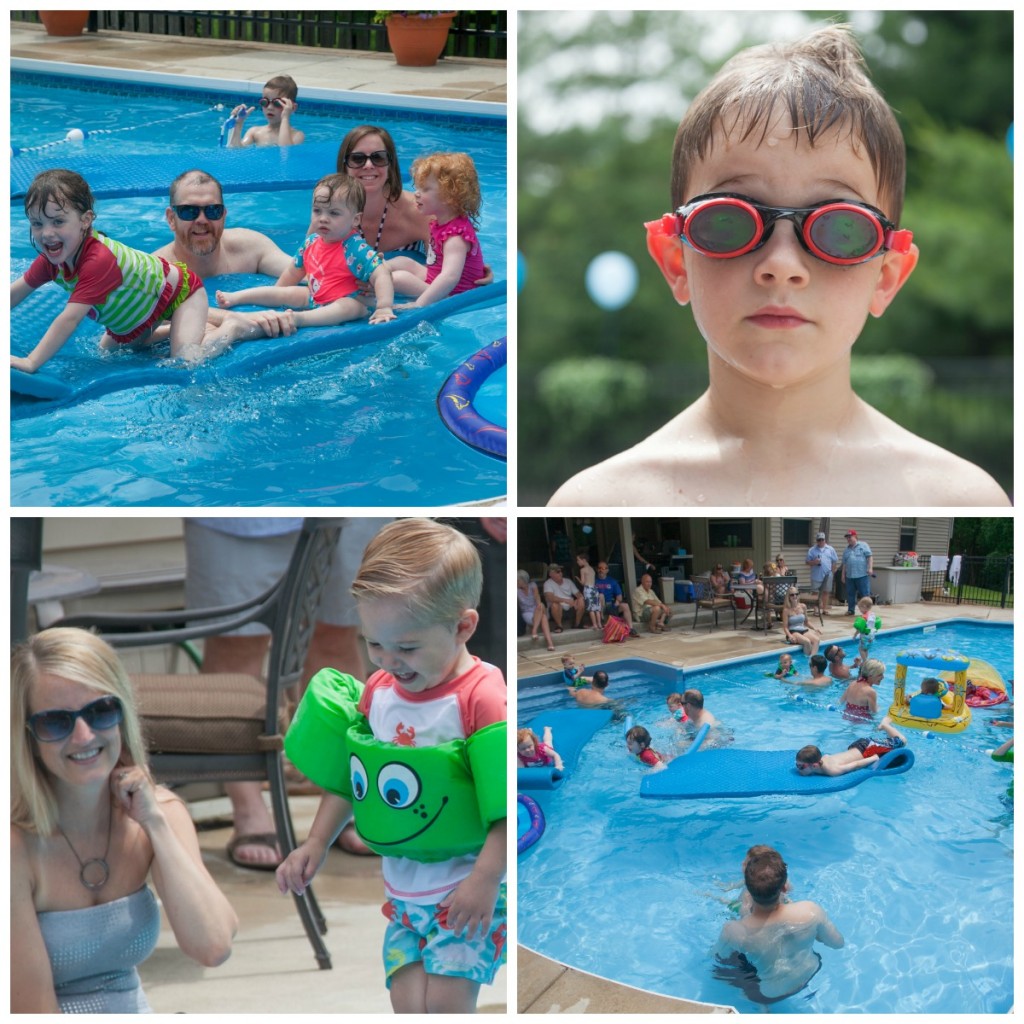 After we filled up on hot dogs, hamburgers, pasta salad, and lots of other yummy food, it was time to sing “Happy Birthday”. Parker wasn’t thrilled about sitting in his high chair, and it only went downhill from there. He burst into tears as soon as everyone started singing to him, and wanted absolutely nothing to do with his smash cake. 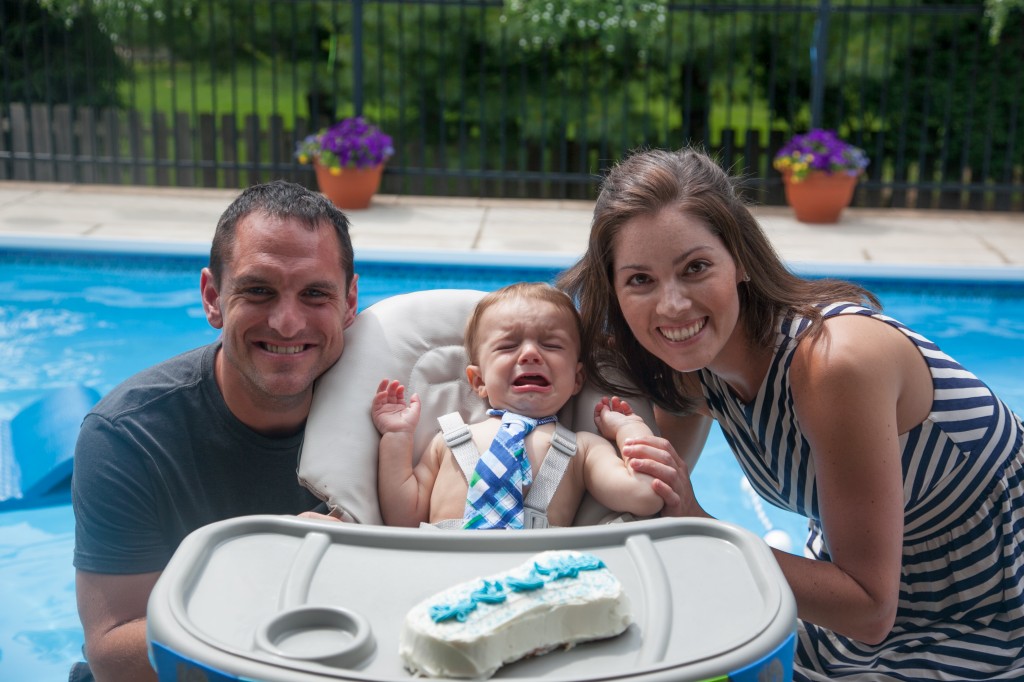 I smiled for this photo, but inside my heart was breaking for my overstimulated, overwhelmed, overtired little buddy. I rescued him from the hot seat a few moments later, but not before Zach dangled him over his cake. I’m sure you can guess how I felt about that!

At that point, the 30+ person crowd began to thin out and Parker had a chance to chill out. He opened a couple gifts, including a pair of Air Jordans from his friends Augie and Charlie. Pretty fancy! 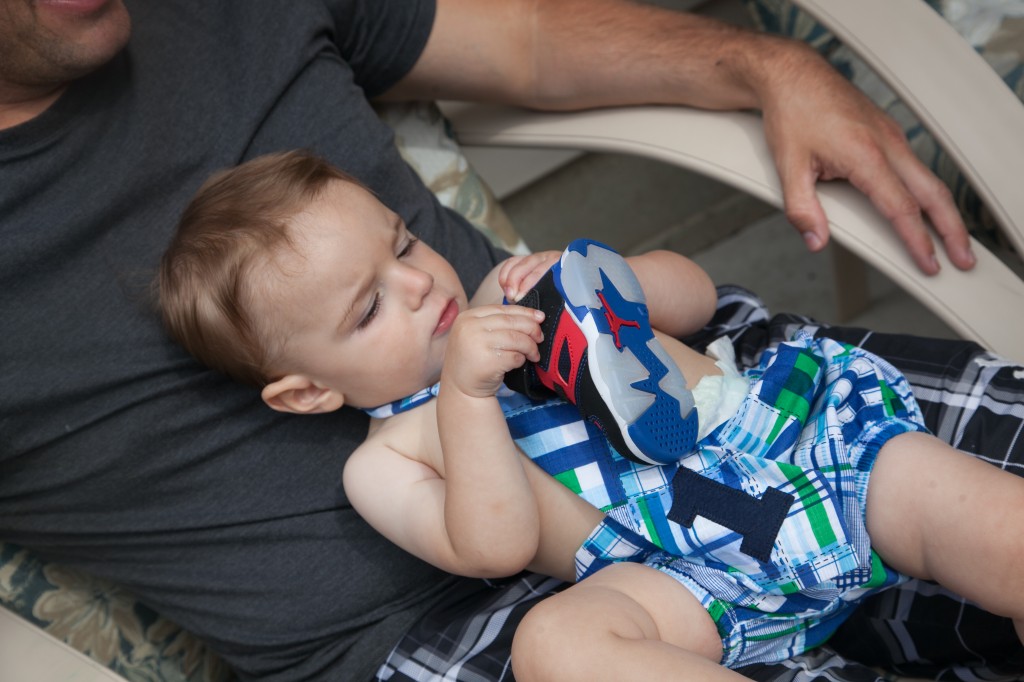 He also got his very own personalized soccer jersey, which of course Zach put on him immediately. One of my mom’s gifts to Parker was an engraved Louisville Slugger bat with his name and the Cubs logo. I think Daddy was much more excited about it than Parker :) Parker’s cousin Mason helped him open the rest of his gifts. 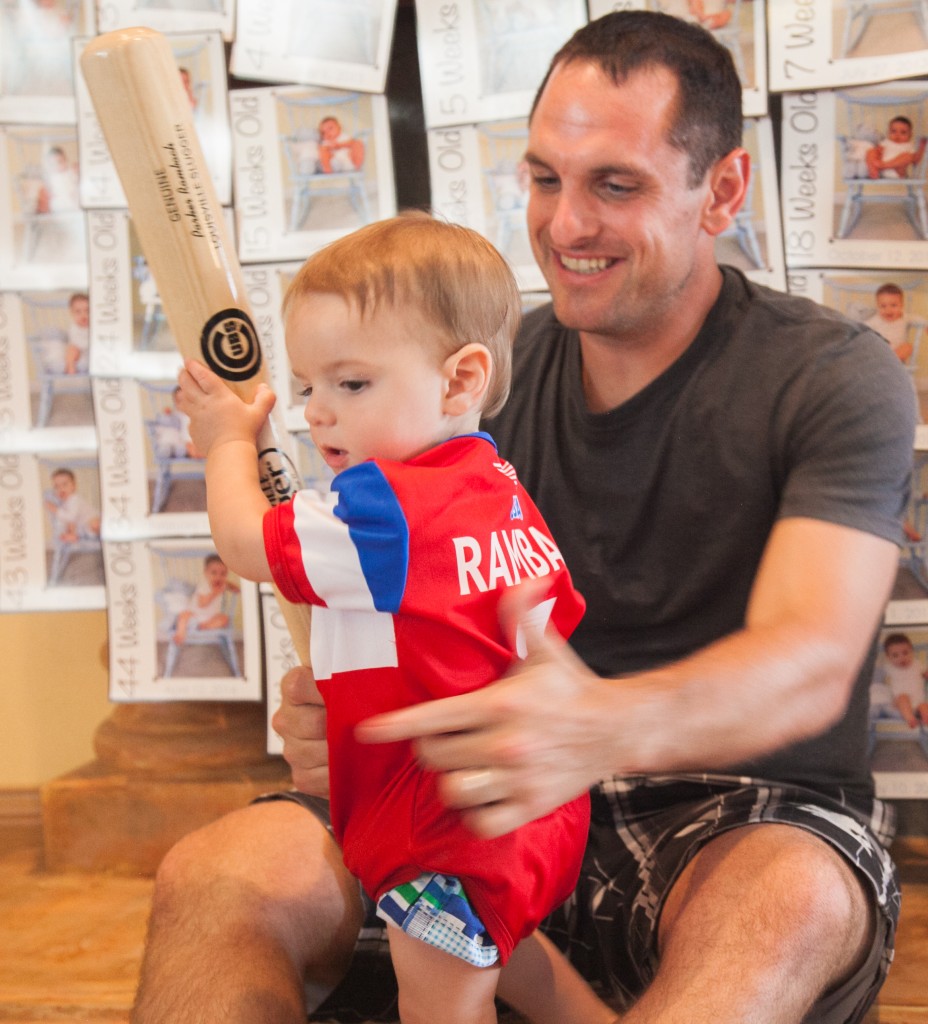 I’m so grateful first and foremost to my parents for hosting and doing all the hard work involved with throwing the party. The rest of the grandparents (especially my mother-in-law) helped out and made it such a special event. So many of our friends and family traveled to Springfield to help Parker celebrate; we are super thankful for the great company and of course, all the awesome gifts Parker received!

After the party was over, we loaded everything up and took our exhausted one-year-old (!) home to get ready for bed. Needless to say, he slept VERY well that night. We all did, actually. It was a wonderful day, but I’m glad first birthday bashes only happen once.