Publicity, Performance, and Praise, Oh My! 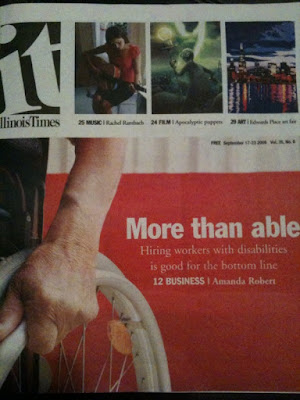 On Thursday morning I got an email from my husband. It was a picture of the Illinois Times cover taken with his iPhone after he realized that I just happened to be on it! I had an idea that I might get a mention because of a show I was scheduled to play this weekend, but a picture on the cover? No clue! Needless to say, it was a nice surprise. 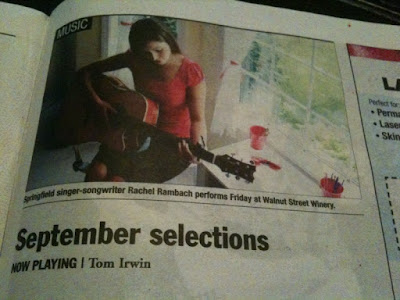 And then he opened up the paper to find that my picture was also featured in the article, along with a short write-up in which my songs were described as “delightfully perceptive”. I couldn’t think of a higher compliment, really :)

The extra publicity was much appreciated, as I had a full house for my show this weekend at a new winery near Springfield. It was a beautiful night, so I was able to play on the outdoor stage. The audience was great, but the very best part of the whole night was right after my first set, when a little girl and her parents came up to talk to me.

The man said that he had seen me in the paper, and wanted his daughter (whose name was Gracie) to see a girl playing the guitar and performing. She had just gotten a guitar for her birthday, and wanted to learn to play it. Gracie told me that her favorite song I sang was “The Climb” by Miley Cyrus. Her dad bought a copy of my CD for her (plus three more to give as gifts) and asked me to autograph it. Before they left, she thanked me for playing and said, “I loved your music!” And then my heart melted.

It was a fabulous night, and exactly the musical outlet I needed after the last several weeks of work-related stress. I can’t wait to play there again in November!

Just another quick thanks to all the new visitors who have stopped by via Blogger’s “Blog of Note” announcement. I am loving all the comments and feedback – please keep them coming, and I promise I will respond to everyone very soon!