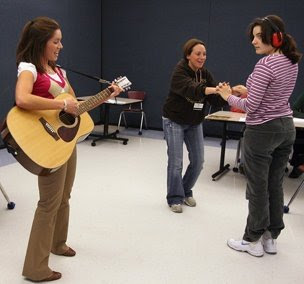 I couldn’t have asked for a better feature about music therapy than the one my local paper published in today’s edition. Many, many thanks to Ann Gorman, who spent the good part of a day interviewing and observing me, and wrote the wonderful article. It is available online, but I also wanted to share it with my Listen & Learn readers right here.

Rachel Rambach has a song for almost every occasion or teachable moment, from “Yummy Summer” and “Friendly Words” to “Fall into Fall” and “Under, Over, In and Out.”

The 26-year-old Springfield native has composed more than 100 melodies, using them in her work as a music therapist for the Hope Institute for Children and Families, and in her private practice.

Since 2007, she’s been employed designing and implementing a music therapy program for the Hope Institute. The institute is a nonprofit center that provides educational, residential and health services to people ages 5-21 with multiple developmental and physical disabilities, including cognitive impairment or illness, autism, cerebral palsy, neurological disorders, visual or auditory impairments, ambulatory difficulties and psychiatric or behavior disorders.

“Hands clap, feet tap. It’s time to sing hello./To you and you and you and you, all of the people that we know,” Rambach sang on a recent morning at Hope School Learning Center on East Hazel Dell Road in Springfield.

Grinning broadly, a young man named Ray enthusiastically joined in with Rambach as she strummed her guitar.

“So let’s all come together, and sing out big and strong./Let’s have a good time in music, while we dance and play along,” crooned Ray, who uses a wheelchair.

Other teens in the classroom, all with special needs, chimed in on songs about the weather or calendar, their voices building as they recalled the lyrics.

“The kids really benefit from repetition and hearing the songs a lot – they can sing them by heart and feel really comfortable with them,” Rambach said.

Although some students at first were reserved, when Rambach launched into “Move Your Body Along,” many eagerly clapped, stomped, stretched, twisted, jumped and swayed to the peppy tune.

“Music connects people on a deeper level than speaking or dialogue does, especially (those) who don’t always communicate verbally as well as others,” Rambach said. “They respond to music, but they don’t have to do it by saying something verbally. They can clap their hands, play an instrument, sing or make sounds to communicate how they’re feeling.”

“It’s a fun thing for them to do,” teacher Jeni Sorrells said of the program. “Even if they don’t sing, they can participate no matter what their cognitive or physical abilities are.”

Rambach noted that music therapy does not entail teaching students or clients how to sing or become musically proficient.

“We’re working on skills that are non-musical,” she said.

She often writes songs to coincide with educational or skill-building units teachers are doing with students, such as colors, following directions or self-care.

“They’re learning something (by way of music), but it’s not hard. It’s not something that feels like a chore or a lesson,” Rambach said.

According to the American Music Therapy Association Web site, the use of music as a “healing influence” dates back to ancient times. Its power became evident in the modern era when, following World Wars I and II, doctors noticed veterans suffering physical and emotional trauma responded well when musicians performed at the hospitals.

However, musicians needed training to work in those settings, which led to the development of the first music therapy degree program at Michigan State University in 1944.

Rambach, a 2001 graduate of Springfield High School, became interested in all types of music at a young age. Studying voice at Rollins College in Winter Park, Fla., she “stumbled upon” music therapy while working on a careers-in-music project.

“I was reading about the effects that music has on not only people with Alzheimer’s, but kids and really anybody,” Rambach said. “I found it fascinating.”

After job-shadowing a music therapist for a semester, Rambach said she “knew that that was for me.” She graduated early from Rollins, earned her master’s degree in music therapy at Illinois State University, and began working for Hope Institute after clinical training at Midwest Music Therapy Services in St. Louis.

Rambach also has a private practice, Music Therapy Connections, at her westside home that she shares with her husband, Zach. She hopes to offer consulting services in the future.

Twelve-year-old Ian “Rusty” Russell has been going to weekly sessions for a few months.

“He loves it,” said his father, Ted Russell.

“She does a lot of music with me, because I’m a fan of music. I like the Beatles,” said Rusty, who has autism.

During their time together in the studio, Rambach and Rusty take turns singing questions and answers about their day and other things.

“Rusty, do you like food that’s made of apples?” Rambach asks, a lilt in her voice.

They also play “Repeat After Me” on the keyboard and do other musical activities. Then there is one last song: “It’s time for me to go, oh, oh, oh …”

While some of the changes Rambach has noticed in her students since starting the music therapy program have been subtle – more attentiveness, better eye contact and greater response – others have been obvious, with more students willing to “step outside their comfort zone” and try new things.

“It’s been really exciting to see that transition,” she said. “It’s amazing.”

Rachel Rambach writes an Internet blog about her experiences as a music therapist, and her songs are available for download, via online subscription.

Thanks to donations, Rambach soon will professionally record, manufacture and distribute “Listen & Learn: Music for a Different Kind of Audience,” a collection of songs compiled from her extensive Listen & Learn Music collection.

In addition, Rambach is featured on the Model Me Kids DVD, “Faces and Emotions.”
In the video series, children demonstrate social skills by modeling peer behavior. Learn more at Model Me Kids.

A Springfield native, Rambach has performed in local community theater productions and serves on the children’s music staff at Laurel United Methodist Church. She recently began playing at venues such as The Walnut Street Winery in Rochester and The Alamo in Springfield.